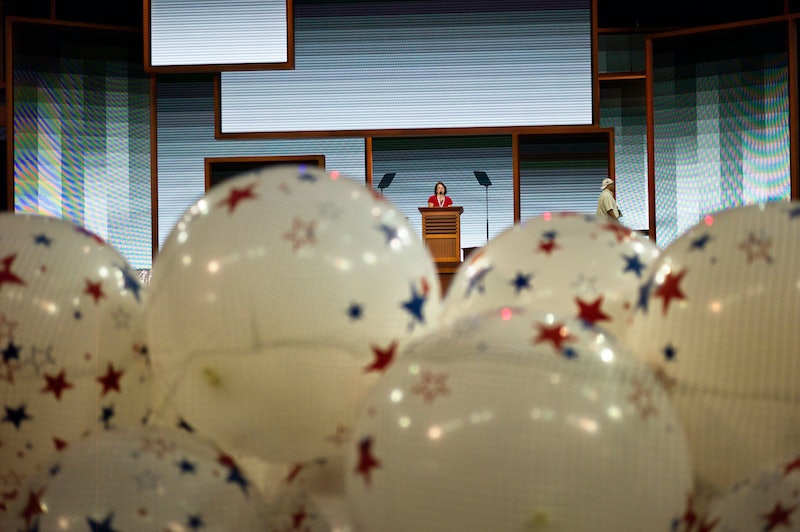 Amid reports no one wanted to speak on his behalf at the GOP's nominating convention in Cleveland, presumptive nominee Donald Trump announced all Republican National Convention speaker slots were "totally filled" with a long waiting list to boot. In a short tweet published Saturday, Trump sought to squash rumors he was having trouble booking high-profile convention speakers once and for all, but refrained from revealing who exactly would be stepping up to the podium. Still, it's hard to keep anything a complete secret, especially when it involves a presidential candidate. So who can we expect to see speak up for Trump in Cleveland?

Although Trump had promised to infuse the Republican National Convention with "some showbiz," it seemed the presumptive Republican nominee was struggling to lock down prominent speakers earlier this week. Whereas political conventions have traditionally relied on big-name politicians for star power, Trump's campaign has teased a night of sports stars and celebrities. "It's gonna be a great combination of our great politicians, but also great American businessmen and women and leaders across industry and leaders across really all the sectors, from athletes to coaches and everything in between," Trump's daughter Ivanka told a Virginia-based radio show on Wednesday, promising a convention that was "interesting" and "different."

"It's not gonna be a ho-hum lineup of the typical politicians," she said. "It's going to be a great celebration of the Republican Party and its values and also of America and its values."

It makes sense that a candidate who campaigned as a political outsider might opt to not parade a bunch of politicians before the microphone at his own nominating convention. However, some say Trump's decision to turn to unconventional convention speakers is more necessity than desire, with many prominent members of the Republican Party uninterested in speaking at this year's convention. Former Republican Presidents George H.W. Bush and George W. Bush have both said they're skipping their party's convention this year and will not offer a comment on the presidential race. Past presidential nominees John McCain and Mitt Romney have also RSVP'd "No."

But we're sure to see some political power manifest itself in Cleveland later this month. An adviser for Ben Carson told the Hill the former presidential candidate will be speaking at the Republican National Convention. And Trump told the New York Times he hoped to have both Alabama Sen. Jeff Sessions and former Alaska Gov. Sarah Palin, two early supporters of the real estate mogul, take on roles at the convention. It's also likely we'll see Newt Gingrich or Chris Christie speak on Trump's behalf (perhaps as a running mate even).

With a little more than two weeks until the convention kicks off, it's unclear how star-studded Trump's convention will be. Former Chicago Bears coach Mike Ditka, NASCAR CEO Brian France, and world heavyweight champion Mike Tyson have all denied reports that they'd agreed to speak at the GOP's nominating convention. There are reports Trump plans to ask UFC President Dana White, Don King, and tennis star Serena Williams — who revealed last month she won't cast a vote for Trump due to her aversion to politics — to appear.

One thing we do know? With Trump at the helm, this year's Republican National Convention is likely to be a family affair. In the midst of promising a convention that was fun and not "boring," Trump told the Times his wife, Melania, was already preparing her own speech. "She's actually writing some things up right now," he said. But the revelation is hardly a bombshell, as it's become rather routine for a candidate's spouse to address the convention as a means of introducing the nominee and emphasizing their character. Some say, however, that while Melania will speak at the convention, it will actually be Trump's daughter Ivanka who will introduce the presumptive nominee. Trump's sons, Eric and Donald Jr., are also expected to speak.

With at least five of the convention's speakers named Trump, the question remains how grand Trump's big night will really be.