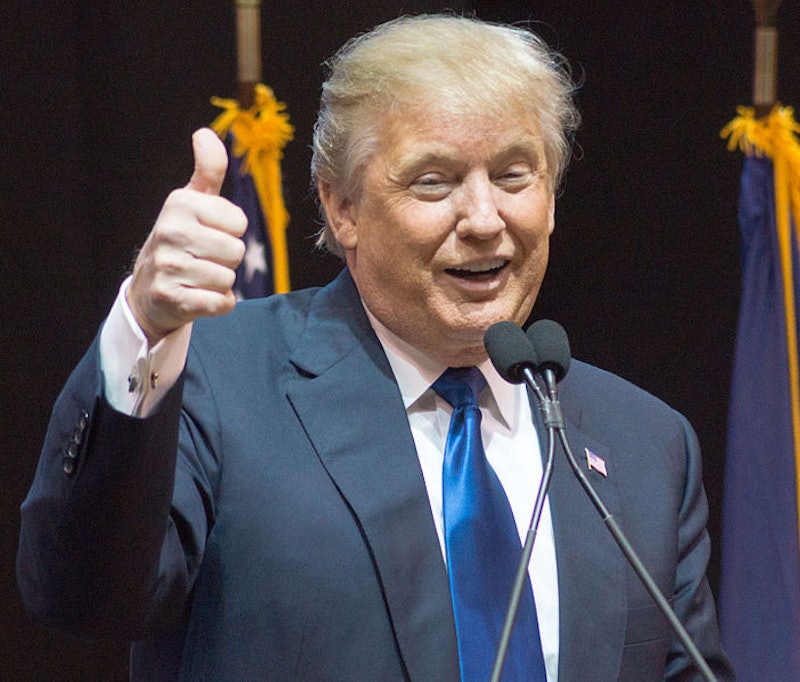 Before the 2016 election cycle, a presidential candidate tweeting absurd things about another candidate would have been newsworthy for its rarity. Donald Trump has changed that — possibly forever. But on Saturday, the candidate one-upped even himself. Donald Trump tweeted a picture of Hillary Clinton with a six-point star calling her corrupt, which has prompted immediate backlash. The six-pointed star, which countless people have pointed out looks like the Star of David, is a symbol associated with Judaism.

The tweet cribs Clinton's campaign materials, with a triumphant picture of the presumptive Democratic candidate and the words: "History made." So what was Trump referring to? The fact that she became the first female major party candidate for president? No! Out to the right of the picture, a six-pointed star appears with "Most corrupt candidate ever!" Ha! Ha! Ha! I get it!

But no one is scandalized that Trump called Clinton corrupt, even if he's now giving her such a definitive superlative as the most corrupt ever. Trump has been calling the Democratic candidate Crooked Hillary for months now, and he isn't exactly a newby when it comes to broad-stroke insults. The real problem comes from the shape of the text his designation for Clinton. And the backdrop.

There are literally hundreds of shapes that Trump's campaign could've gone with in his clip art search. What about a square? Or a triangle? Or a friggin' dodecagon? But no, Trump chose a six-pointed star, one that is almost inextricably associated with Judaism.

It doesn't take mental gymnastics to understand why this would be problematic. Seemingly realizing this misstep, Trump tweeted out another version of the image two hours later, this time with a circle and deleted his first tweet:

Still, as Trump knows all too well, the internet is not exactly a forgiving place. The damage had already been done, and the internet went crazy:

Good to know that after all of these months, Trump can still manage to out-Trump himself. Who knows what his rationale for this would be ("I just thought it was a nice, pretty star."), but I'm willing to guess that we won't see any kind of sincere apologize for this (intended or not) anti-Semitism. Regardless, the internet won't let Trump forget this misstep. At least for today.