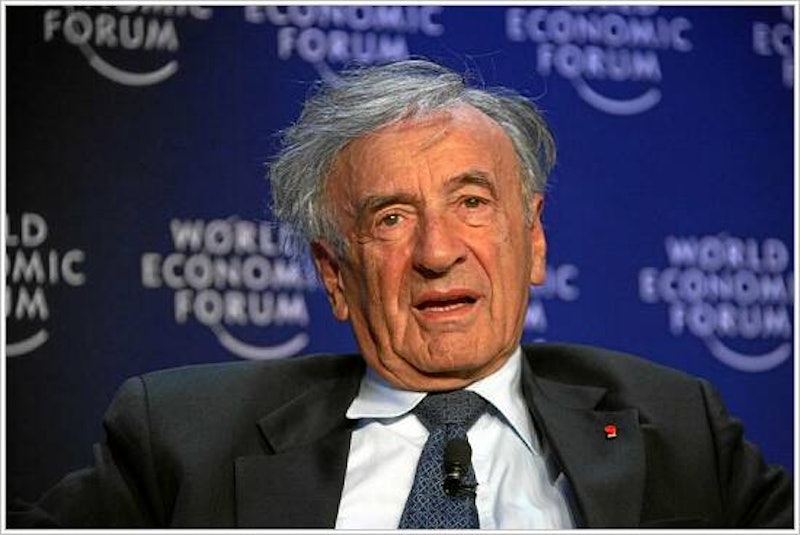 After leading an extraordinary life and serving as an inspiration for millions, Elie Wiesel died Saturday at the age of 87 in his Manhattan home. Wiesel, whose works promoting education about the horrors of the Holocaust, earned a Nobel Peace Prize and critical acclaim for his books. His most famous work, perhaps, is the 1955 memoir Night, in which he detailed his experiences as a teenager in Auschwitz and other concentration camps.

As The New York Times noted, Wiesel became an important figure in preserving the history of the Holocaust. Night was, perhaps, the most important remembrance from a Holocaust survivor when it was published. The memoir and his other works, as the The Times put it, "gradually exhumed the Holocaust from the burial ground of the history books."

Wiesel, perhaps the most well-known remaining Holocaust survivor, dedicated his life to ensuring that the world understood what he had lived through, but also extending his experiences to fight for equality. In 1986, having already received the U.S. Presidential Medal of Freedom, the French's rank of Grand-Croix in the Legion of Honor, and being knighted Commander of the Order of the British Empire, he was awarded the Nobel Peace Price for speaking out about violence, inequality and racism.

Wiesel was born in the Romanian town of Sighet in 1928. Following Hungary's annexation of Sighet in 1940, the entire Jewish population was forced to live in two ghettos. In 1944, Sighet's entire Jewish community was deported by the Nazi's to the Auschwitz-Birkenau concentration camps—including Wiesel and his family.

Both of Wiesel's parents were killed in the concentration camps, a horror that could ostensibly end the life of any surviving relatives. Wiesel, however, went on to study under renowned Jewish scholars and carve a life for himself that served as an inspiration for the world.

Jewish leaders are mourning the death of Wiesel, extolling his contribution to his people. In a statement, Israeli Prime Minister Benjamin Netanyahu said that Wiesel "gave expression to the victory of the human spirit over cruelty and evil, through his extraordinary personality and his fascinating books." Netanyahu, who knew Wiesel personally, also made clear just how important he was to the Jewish people, saying that "in the darkness of the Holocaust, in which our sisters and brothers were killed - six million - Elie Wiesel served as a ray of light and example of humanity who believed in the goodness in people."

More like this
A 'Bridgerton' Star Just Dropped A Major Hint About Joining The Live-Action Barbie Cast
By Bustle UK
Taylor Swift, Kerry Washington & More Speak Out On Uvalde Mass Shooting
By Jake Viswanath
Photos Of Boris Johnson Drinking At A Downing Street Lockdown Party Have Surfaced
By Bustle UK
How To Support Gun Control Reform Right Now
By Morgan Brinlee and Carolyn Steber
Get Even More From Bustle — Sign Up For The Newsletter