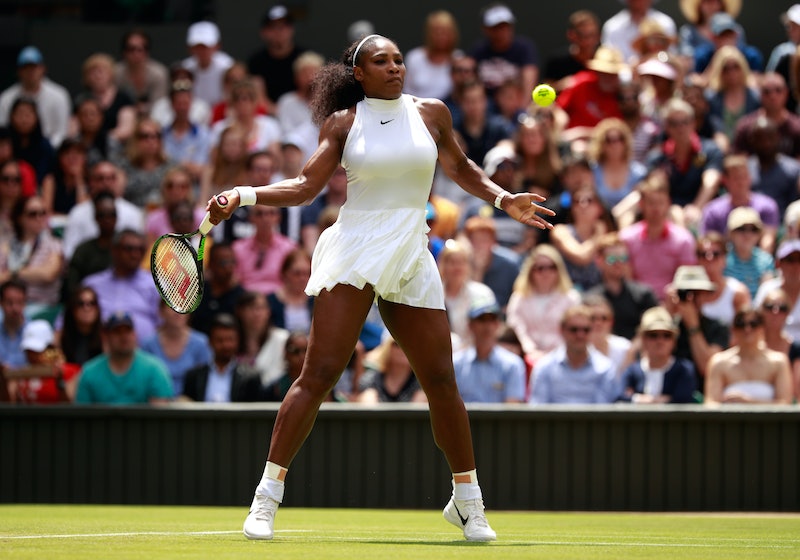 As if Serena Williams' place in sports history wasn't already secure, the tennis legend just shattered a another record, making her one of the winningest athletes of all time. Williams picked up her 300th Grand Slam match win this weekend at Wimbledon, and in the most humble show of sportsmanship ever, she wasn't even a little phased by the magnitude of her achievement. "Cool, oh, nice. I had no idea," Williams told reporters after the match. "That's awesome, right? That's a lot of matches."

Williams has been a powerhouse in the tennis world since winning her first major championship at the U.S. Open in 1999. Rising to the top of the Women's Tennis Association alongside her sister Venus, Serena is one of only 10 women ever to win the Australian Open, U.S. Open, French Open, and Wimbledon, completing a career Grand Slam within less than 10 years of turning pro. Her astonishing career is proof of the power of female athletes in and of itself, but that power has been under attack as of late.

Tennis has long been a relatively equal men's and women's sport, since the early days of the professional leagues. The ATP, the men's professional league, started just four years before the women's pro league, the WTA. Any lingering doubts of misogyny seemed to be squashed in 1973 when Billie Jean King, one of the founding members of the WTA, crushed former pro player Bobby Riggs in the infamous "Battle of the Sexes."

However, sexism reared its ugly head again just earlier this year, when Indian Wells tournament CEO Raymond Moore accused the women's league of "riding on the coattails of the men." "If I was a lady player, I'd go down every night on my knees and thank God that Roger Federer and Rafa Nadal were born, because they have carried this sport. They really have," Moore said.

Top men's player Novak Djokovic also questioned equal pay for men and women in tournaments (though it's already pretty unequal). “[The WTA] fought for what they deserve and they got it. On the other hand I think that our men’s tennis world, ATP world, should fight for more because the stats are showing that we have much more spectators on the men’s tennis matches," Djokovic said just after a win at the BNP Paribas Open. "I think that’s one of the reasons why maybe we should get awarded more."

Williams wasted no time in firing back at both men with quips as quick as her serves. "If I could tell you every day how many people say they don't watch tennis unless they're watching myself or my sister, I couldn't even bring up a number. So I don't think that is a very accurate statement," Williams told reporters in response to Moore's comment, while she was at his tournament no less. The very next day, she took aim at Djokovic, destroying the sexism behind his convoluted statement.

"Novak is entitled to his opinion," said Williams, "but if he has a daughter — I think he has a son right now — he should talk to her and tell her how his son deserves more money because he is a boy." Both men later apologized for their comments, but the public display of sexism has reminded the tennis world that there's still a ways to go.

Clearly, Williams' landmark victory came at a great time to shut down comments like Moore's and Djokovic's. Williams is never afraid to shut down the haters, but there's no better way to do that than through actions. Williams' modest reaction to her record-breaking wins goes to show that she's not focused on anything except playing amazing tennis, and through her winning legacy, Williams' is helping to make the sports world more equal for all women.