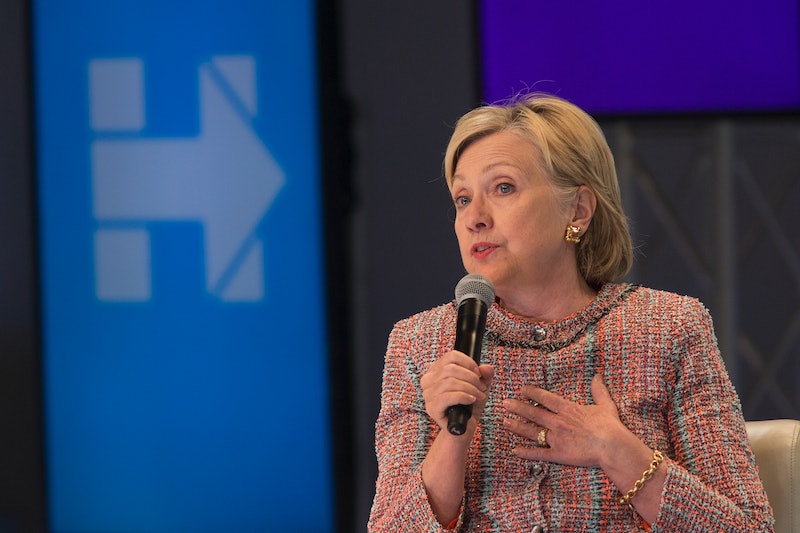 After three years of accusations, investigations, and speculation, there may finally be a resolution to the Hillary Clinton email scandal soon. The FBI is expected to announce the results of its investigation into Clinton's emails between July 5 and July 25, according to The Washington Post. The holiday weekend theoretically delayed the decision, which may be ready as soon as Tuesday, but the last day of that time window is the beginning of the Democratic National Convention. If the FBI investigation finds Clinton is liable for any wrongdoing, things could get really interesting, really fast.

Of course, that's a big if — the FBI investigation isn't likely to end in an indictment. Clinton has already been cleared of any wrongdoing by the Department of Justice, which is a powerful ally for Clinton to have. Also, the FBI is technically part of the DOJ, so it doesn't make any sense as to why one division of the department would clear her and another would indict her. Most likely, the FBI will announce that Clinton cooperated with the investigation and that she has been cleared by the bureau, just in time for the announcement to be a big weight off her shoulders at the DNC.

However, let's draw out the hypothetical for a bit and say Clinton gets indicted. The DNC would be complete chaos, and there's a chance that Clinton wouldn't get the nomination that she thought locked up. With only one viable candidate left, a massive tide of superdelegates would likely turn to Bernie Sanders, who is still in range to take the nomination under this scenario. It's not exactly the contested convention that Bernie supporters foresaw, but it's pretty much the only one potential situation that would result in a Sanders nomination at this point. If Clinton is indicted, Sanders could once again find himself at the center of the political spotlight.

The silver lining in this three-year raincloud is that the Clinton debacle has ensured that this type of situation is very unlikely to happen again. In 2014, President Obama signed into law an updated version of the 1950 Federal Records Act, first instated by President Harry Truman. The modern version of the law makes clear stipulations on how government officials should handle using personal email addresses, and mandates government officials to send copies of all emails to a government email address. Now that the law is more secure, the American people hopefully shouldn't have to go through this public affairs nightmare again.