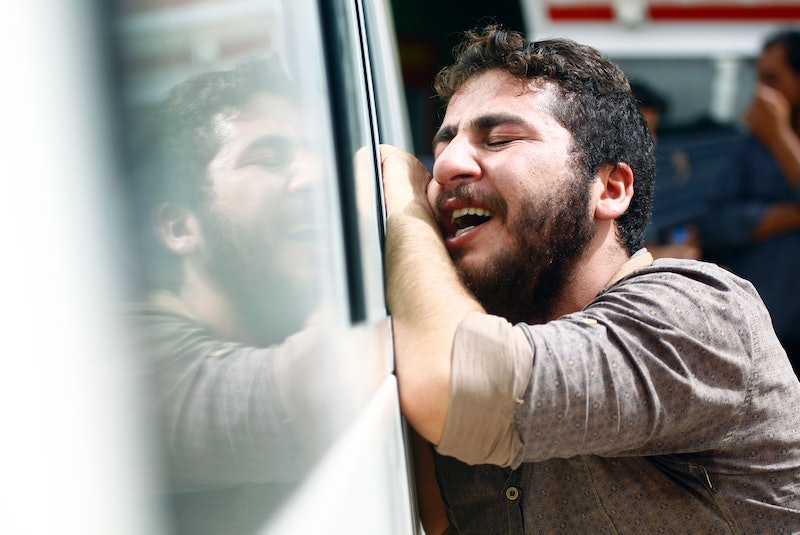 On a holiday weekend in early July, a bomb reportedly detonated by the Islamic State ripped through a popular central neighborhood killing at least 115 people who had come to shop, stroll the streets, and mingle in cafes. But this attack didn't happen in a Western country, meaning it's unlikely to grab the world's attention in the way similar attacks in Paris and Brussels did. The terrorism double standard, or the idea that Western lives garner more attention, remains a sad reality. But the Islamic State has targeted people around the world, and the recent bombings in Baghdad are a grim reminder terrorism is a global problem.

In the single deadliest attack on Iraq's capital city this year, a truck bomb exploded in Baghdad's central Karrada district, leaving more than a hundred dead and at least 180 injured, according to Iraqi officials. In targeting a popular commercial area, busy with people out celebrating the last weekend in the Islamic holy month of Ramadan, the bombing seemed a deliberate attempt to target peaceful civilians. Another five people were killed in a separate bomb detonated near an outdoor market in Baghdad's al-Shaab neighborhood a few hours later.

Saturday's deadly bombings in Baghdad came days after gunmen claiming to be from the Islamic State killed 20 people at a cafe in Dhaka, Bangladesh, and suicide bombers believed to be tied to the terrorist group killed 45 in an attack on the main international airport in Istanbul, Turkey.

In the last two years, the Islamic State has steadily extended its focus beyond the Middle East. A record of major attacks carried out by the terrorist organization since September 2014 by the New York Times is a sobering reminder that terrorism is a global problem. At least 20 countries have been the target of at least one Islamic State attack, with more than 1,200 people killed worldwide. But there's a problem with the Times' data. It fails to count attacks or victims in Iraq and Syria, where the Islamic State carries out bombings with devastating frequency.

Saturday's bombing in Baghdad was hardly the first time the Islamic State has targeted civilians in Iraq's capital. Just last month, the Islamic State killed 30 people in two suicide attacks, according to the BBC. On May 17, 69 people died just six days after multiple car bombs killed 93 people. Some estimate 500 Iraqis have been killed so far this year in attacks tied to the Islamic State. While that number is difficult to confirm, it's undeniable that terrorism is just as great, if not more, of a threat to civilians in Iraq and the surrounding Middle East. According to the United Nations, 18,802 civilians were killed in ongoing conflict between the Islamic State and Iraqi forces between January 2014 and October 2015.

Yet many of those deaths go unnoticed and uncounted in the West. The War on Terror, a metaphor created by President George W. Bush for the U.S.-led military campaign launched after the September 11 attacks, has largely painted terrorism as a problem plaguing Western nations, despite the fact that attacks occur in high numbers across the Middle East and reports show Muslims overwhelmingly have a negative view of the Islamic State. So, why are we so quick to discount those killed in Iraq and Syria by terrorist organizations like the Islamic State among? Is it our lack of emotional proximity to the Middle East? A belief we're disproportionately affected by terrorism in the West?

Whatever the reason, the Baghdad bombings are sober proof that terrorism is a global problem, threatening civilians the world over.