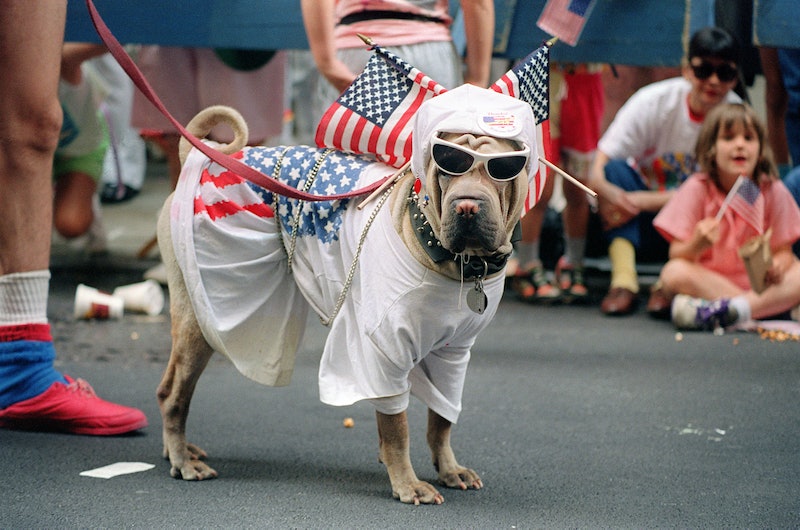 It's well-known that many pets don't enjoy Fourth of July festivities as much as their human companions do. The thunderous boom of a firework can send even the bravest guard dog to cower under the bed. It's a problem that can have dire consequences and leaves pet owners desperate for ways to help pets get through July 4 fireworks. There's help this year, however, as the Food and Drug Administration (FDA) recently approved a medication aimed at treating noise anxiety in dogs.

Noise anxiety can be a serious problem for pooches. Roughly 40 percent of dogs suffer from a fear and aversion to loud noises, a problem often exacerbated by Fourth of July fireworks. In an effort to get away from the crack, whiz, and bang of a firework, a panicked dog might flee from home, dart into traffic, or get stuck in an ill-chosen hiding spot. Animal shelters around the country are careful to warn pet owners about keeping animals inside while fireworks are going off. For many shelters, July 5 is one of the busiest days of the year for collecting runaway dogs, the New York Times reports.

Sileo, the first FDA-approved drug for noise aversion in canines, became available for use in June. The drug, which has to be prescribed by a veterinarian, calms dogs without sedation by blocking the release of norepinephrine, a chemical linked to feelings of fear and anxiety. According to Zoetis Inc., the company marketing Sileo, the drug "allows dogs with noise aversion to remain calm yet fully functional."

It's potentially a miracle for owners of highly anxious dogs, who've previously turned to tranquilizers like acepromazine or canine-tailored doses of Prozac or Xanax when their pet became frightened by thunderstorms, lawn mowers, slamming doors, and, of course, fireworks. Although a tranquilizer may stop an anxious dog's whimpering, shaking, or attempts to escape it does nothing to ease their anxiety.

If medication isn't your thing, there are a few other recommended ways to help your pet cope with raucous Fourth of July fireworks. Keeping pets inside (and in the company of a human) during the holiday remains one of the best ways to guarantee their safety. Petting, holding, or playing with pets who appear to be in distress can also help calm them while playing music or the TV (no televised fireworks, please!) can help distract them from the noise outside. Other options for canine owners include the Thundershirt, which uses a swaddling technique to calm anxious pups, and cannabis-infused treats made with produced with cannabidiol to ease pets anxiety.

However, you choose to ease your pet's fireworks fear, perhaps the most important tip for ensuring their safety over the Fourth of July holiday is to make sure they're wearing collars and tags with up to date information should they happen to get out.