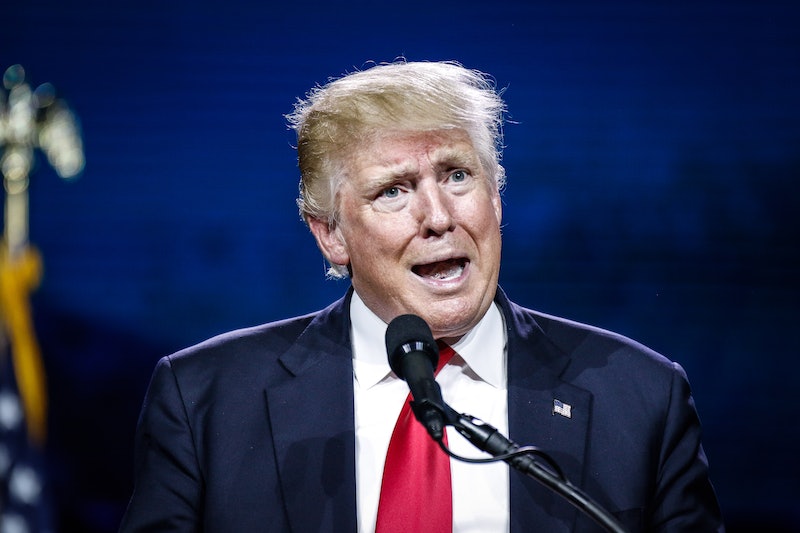 Shortly after it was revealed Hillary Clinton had been interviewed by the FBI on Saturday, her rival, presumptive Republican nominee Donald Trump, took to social media to gloat. But as the weekend wore on and rumors surfaced there would be no criminal charges levied against the former secretary of state, Trump's tweets took on a completely different tone. If his latest Twitter rant is any indication, Trump was counting on a Clinton indictment.

Not less than an hour after Trump tweeted it would be "impossible for the FBI not to recommend criminal charges against Hillary Clinton," he was back to announce "sources" had said "no charges will be brought against Crooked Hillary Clinton." He was clearly upset. "The system is totally rigged," the presumptive Republican nominee.

"Unnamed sources" reportedly told CNN on Saturday that it was expected "there will be an announcement of no charges" within the next two weeks. Many of Clinton's supporters, including Sen. Cory Booker and Sen. Sherrod Brown, came out Sunday to say they were confident there would not be an indictment in the investigation into Clinton's use of a personal email server while serving as secretary of State. It was apparently not news Trump, who recently asked supporters to "indict" Clinton at the polls in November, wanted to hear.

The presumptive Republican nominee was back on social media Sunday with a string of tweets trumpeting how corrupt the FBI’s criminal probe of Clinton is. "Only a fool would believe that the meeting between Bill Clinton and the U.S.A.G. [US Attorney General Loretta Lynch] was not arranged or that Crooked Hillary did not know," he began. "Crooked Hillary Clinton knew that her husband wanted to meet with the U.S.A.G. to work out a deal. The system is totally rigged and corrupt!" An hour later he was back to remind followers "THE SYSTEM IS RIGGED!"

It's a message Trump's been spreading in different forms since the presidential primaries. First, it was the Republican delegate system, now it's the FBI's investigation into his general election rival. Indeed, a Clinton indictment would have been good news for Trump as the two battle it out for voters ahead of November's general election.

While most Americans were enjoying a three-day holiday weekend, Trump appeared to be having a less than stellar Fourth of July. He continued to vent his frustrations at the idea Clinton may not face charges for her use of a private email server over Twitter well into Sunday evening.

"Does anybody really believe that Bill Clinton and the U.S.A.G. talked only about 'grandkids' and golf for 37 minutes in plane on tarmac?" he asked before implying Clinton had sent her husband to settle things with Lynch in a separate tweet. "The SECRET meeting between Bill Clinton and the U.S.A.G. in back of closed plane was heightened with FBI shouting 'go away, no pictures.'"

More like this
Michigan’s Governor Is “Going To Fight Like Hell” To Protect Abortion Access
By Andrea Zelinski
How To Fight For Reproductive Rights, Based On How Much Time You Have
By Courtney Young
Billie Piper Just Confirmed 'I Hate Suzie’s Festive Return
By Kayla Blanton and Shahed Ezaydi
The Case For A Hard Launch Summer
By Morgan Sullivan
Get Even More From Bustle — Sign Up For The Newsletter