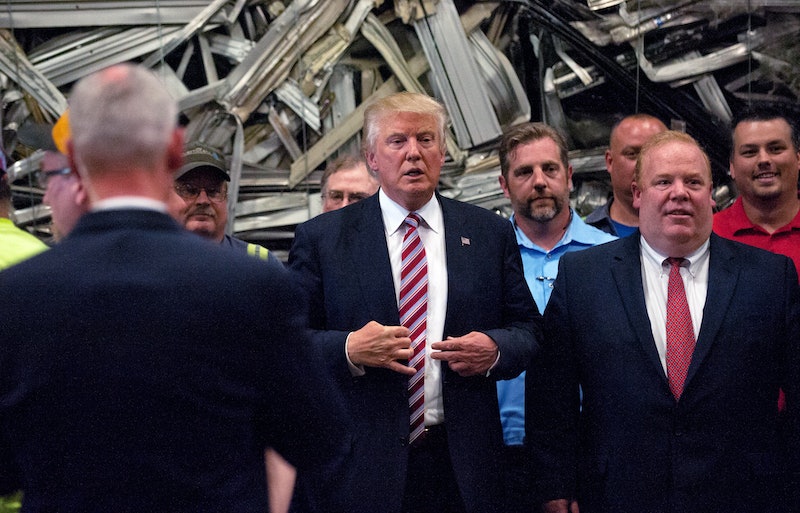 Donald Trump is once again facing allegations of anti-Semitism, this time for tweeting an image juxtaposing a Star of David, piles of cash and the words “most corrupt candidate ever” all in one. Many felt this perpetrated anti-Jewish stereotypes and catered to rank anti-Semitism, but Jeffrey Lord, one of Trump’s cable news bootlicks, disagrees. Lord argued that Trump’s Star of David tweet isn’t offensive because, see, it wasn’t really a Star of David after all!

“Attention ignorant trolls,” Lord proclaimed on Twitter.” [T]he six pointed star has been a symbol of law enforcement in America....are you really unaware?”

CNN “analyst” and former Trump campaign manager Corey Lewandowski also offered this baseless, garbage argument in defense of Trump. Yes, it’s true that many law enforcement agencies use six-pointed stars for their badges, especially sheriff’s departments, though many of those stars have circles at the end of each point to differentiate them from the Star of David.

The point of the image (in case you missed it) is that Hillary Clinton is corrupt. Driving this point home with a law enforcement badge might make sense if Clinton had been, say, an Attorney General, or an official otherwise tasked with upholding the law. But she was not. She was a Secretary of State and U.S. senator, neither of which involve law enforcement. As it stands, showing a star that denotes law enforcement actually undercuts the argument of the image — that Clinton doesn't follow the law.

According to The Daily Beast, the earliest record of the image was from a June 15 tweet by a user who’d posted many racist, anti-Semitic, anti-Clinton images before. That user has since deleted their account, but plenty of their old tweets, including the one that sparked this whole controversy, are still viewable online. This person’s contributions to the Internet include many instances of overt racism, which you can see here, and here, and here, and many other places.

From there, the image made its way to the fetid Internet cesspool known as 8chan, a hub of sorts for anti-Semites and Trump fans, where it was posted on June 22 in a thread full of anti-Jewish comments and images.

Finally, on Saturday, Trump tweeted out the picture to his many millions of followers. The presumptive Republican nominee has since deleted the image and replaced it with one that omits the star, which would be an odd decision if he truly believed it was a reference to law enforcement badges.

Lastly, and most importantly, we should remember that Trump — both as a candidate and as a Twitter use — has a long history of playing footsie with white supremacists. ThinkProgress did a good job documenting this pattern, and according to one analytics firm, 62 percent of Twitter users who retweeted Trump during a single week in January also followed multiple white supremacist accounts. Let’s also not forget the fact that Trump himself was extraordinarily reluctant to denounce the Klu Klux Klan, at one point refusing to do so twice in the same interview.

It’s at least possible to imagine a situation where a candidate unwittingly sends out an image like that, apologizes profusely after realizing their mistake, and everybody moves on. But this is not such a situation. In addition to the fact that Trump hasn’t apologized, he simply doesn’t deserve the benefit of the doubt on these matters. He’s played nice with white supremacists and anti-Semites throughout his campaign, often amplifying their voices on his Twitter feed. To interpret Trump’s latest tweet through any lens other than this one is an exercise in willful ignorance.