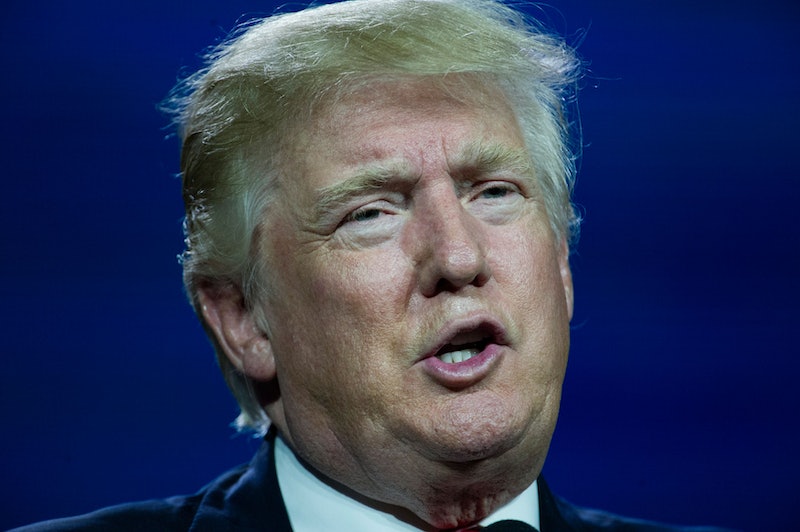 During one of the many Republican primary debates, Ted Cruz criticized a CNBC moderator for referring to Donald Trump as a “comic book villain.” In fact, the moderator hadn’t used the word “villain,” but no matter: Cruz’s words have become prescient, because Trump is now a literal Marvel supervillain. I’m not being hyperbolic: Spider-Gwen Annual #1, a new line of comics based in an alternate Marvel universe, features a monster based on Trump and his presidential campaign.

Sure, the Donald’s name appears nowhere in the comic. But it's impossible to interpret the villain anything other than Trump stand-in. His name is MODAAK — Mental Organism Designed As America’s King. His face is orange-tan, with uneven coloring under the eyes, pursed lips and blonde hair poking out from underneath the helmet. And he’s got tiny, tiny hands.

The Spider-Gwen series takes place in an alternate version of the Marvel Universe, wherein Captain America is a black woman and Peter Parker’s girlfriend is the one bitten by the radioactive spider. MODAAK is based on an older Marvel villain called MODOK, or Mental Organism Designed Only for Killing, who’s more or less a giant, evil head.

“Get back on your feet, foreign filth!,” MODAAK screams at several dark-skinned characters in the new issue. “Must make America…”

...but before he can utter the words “great again,” MODAAK is taken out in one fell swoop by Captain America. With his dying words, he pledges to crush her with his “powerful hands.”

Although some of Trump’s followers have taken issue with the representation, this kind of thing isn’t at all unprecedented in comics. In 2014, an issue of Punisher depicted the cast of Fantastic Four — that is, the actual actors in the film — being blown up. What’s more, the issue of Spider-Gwen that features MODAAK also includes a character who looks curiously like Prince.

Trump also isn’t the only contemporary politician to appear, in some form or another, in a recent comic. In 2015, Storm Entertainment published two comics books featuring Bernie Sanders and Hillary Clinton as their respective protagonists.

The difference, though, is that those books were essentially biographies, focused on telling the stories of how Clinton and Sanders ended up where they are now. MODAAK’s appearance in Spider-Gwen #1, by contrast, seems aimed primarily at depicting the presumptive Republican nominee as a giant, floating, xenophobic head with small hands.

More like this
Elizabeth Olsen's Chris Evans Friendship Update Was Accidentally Hilarious
By Grace Wehniainen
Meet The Disney Imagineer Bringing 'Guardians Of The Galaxy' To Epcot
By Charlie Mock
Wait, Did Wanda Die In 'Doctor Strange And The Multiverse Of Madness'?
By Arya Roshanian
Hayden Panettiere Will Return For 'Scream 6': "We F*cking Won, Scream Fam"
By Jack Irvin and Jake Viswanath
Get Even More From Bustle — Sign Up For The Newsletter