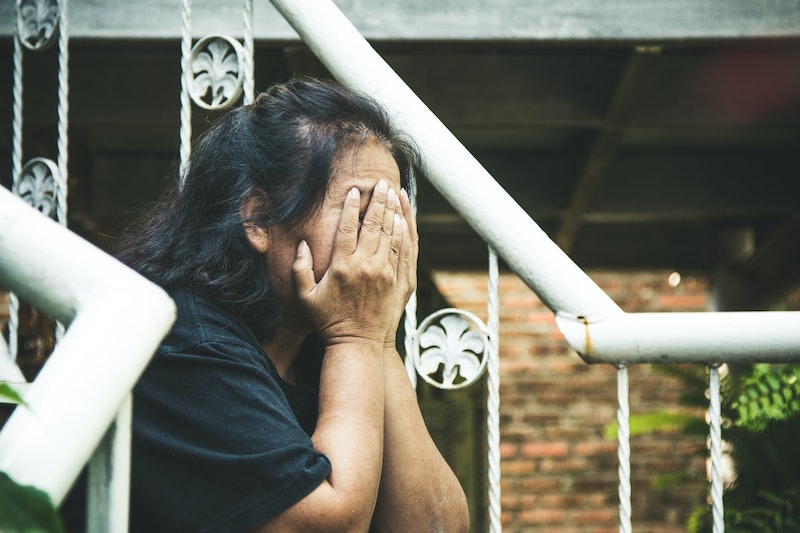 Simply put, a thought or feeling is "irrational" if it's not in line with reality, evidence, and rational evaluations of the situation. But when it comes to the irrational thoughts that can crop up in the mentally ill it becomes much less a judgement game, and much more of a source of difficulty that needs to be treated with systems like cognitive behavioral therapy. And I'm including all kinds of irrational thoughts associated with mental illnesses, from the obsessive thoughts associated with anxiety to the self-castigation associated with depression. Things can get detached from reality in many ways, and a lot of them aren't necessarily obvious. So how do you know if you're being irrational?

The key thing to note about irrational thoughts, particularly if you suffer from guilt about your mental illness and its impact on your life, is that they are often indistinguishable from rational thoughts unless you're trained by therapy and practice to distinguish them. We can't just "make them go away;" for many sufferers it's hard enough to "catch" that they might not be strictly realistic, let alone diminish their power.

There's also a difference between thoughts that you easily dismiss as "irrational" because they're worrying (or because, as a woman, you're often told your thoughts and feelings aren't logical), and thoughts that seem perfectly balanced while actually being distorted. There's a reason cognitive behavioral therapy is done by professionals.

1. They Are Based On Catastrophizing

According to the Cognitive Behavioral Therapy Guide, there are certain core characteristics of an irrational thought, but they aren't all identical. One particularly common one, though, is a thought that's based on catastrophizing, or the practice of immediately jumping to the worst conclusion on the flimsiest of evidence. Here's an example: somebody doesn't respond to your "hello" and you immediately believe, with certainty, that they hate you and you're socially repulsive.

Psych Central distinguishes between two kinds of irrational catastrophizing: the reactive, like the example above, and the future-oriented, where we contemplate what's coming and how it will all, inevitably, go horribly wrong. The irrationality comes from the fact that we're not evaluating probabilities correctly: it's far more probable that the person didn't hear our greeting properly, and that we won't in fact end up with a completely destroyed future for no reason.

2. They Come From Incorrect Core Beliefs

One of the key elements in cognitive behavioral therapy is in challenging incorrect core beliefs that lead to what therapy and treatment program Lucida calls "thinking errors," or irrational thinking. "Core beliefs," explains Amy Wenzel in Modification of Core Beliefs in Cognitive Therapy , "are defined as fundamental, inflexible, absolute, and generalized beliefs that people hold about themselves, others, the world, and/or the future ... When a core belief is inaccurate, unhelpful, and/or judgmental (e.g., 'I am worthless'), it has a profound effect on a person’s self-concept, sense of self-efficacy, and continued vulnerability to mood disturbance. Core beliefs typically center around themes of lovability (e.g., 'I am undesirable'), adequacy ('I am incompetent'), and/or helplessness (e.g., 'I am trapped')."

CBT aims to get to the root of these core beliefs, which have often embedded and reinforced themselves over many years, and enable people to recognize how they're distorting evidence and creating irrational responses. Even if you recognize that a thought comes from a core belief you know is actually wrong, though, you may not be able to pry yourself loose from it.

3. They Involve Mind-Reading Or Attribution Of Thoughts

A lot of human interaction involves some measure of empathy, or anticipating what somebody else is thinking or feeling; but in irrational thoughts, that attribution can vastly overstep its bounds and go haywire. Cognitive Behavioral Therapy Los Angeles lays it out: in irrational cases, we are flat-out attributing thoughts, usually not very flattering, to other people, without entertaining the possibility they might be thinking something else. For example, if we mess up, we immediately think the listener believes we're a loser. The logic is usually completely unsound and there isn't sufficient evidence to support it at all, but we are certain our interpretation is correct.

This is a kind of irrationality associated with depression: it's a distortion of perception that can lead to massive and undeserved emotional responses. All-or-nothing thinking is also known as black-and-white thinking, and doesn't allow any subtlety in assessing a situation. You're either a complete failure or a success, you're loved or everybody hates you, you did well at a presentation or absolutely bombed it. The Clinical Depression Organization traces the process by which this turns into serious emotional turmoil: such strong beliefs lead to deep emotional swings, often involving guilt, shame, and self-blaming.

5. They May Be Invasive And Distressing

Irrational thoughts don't dislodge easily. The Calm Clinic points out that, particularly in cases of anxiety where obsessive irrational thoughts become a "pattern" in the brain, they can be deeply invasive, interrupting other thought processes and making it hard to focus; they are also often distressing, negative, and upsetting.

They don't have to be the second one, though; Psych Central, in identifying 10 different types of highly irrational thoughts in people with mental illness, notes that persistent irrational thoughts can involve notions of grandiosity or invincibility, where we perceive ourselves as somehow deeply superior or unable to be harmed, or think that certain rituals can make us powerful. Distress, in other words, isn't always a good indicator that a thought is irrational.

Sometimes we are in fact responsible when something goes wrong, but it's irrational to attribute failures, problems, and disasters to our own actions when they actually didn't have anything to do with it. Psychology Today calls it "a major trigger for self-blame," and it involves things like believing that your own "goodness" can avert or prevent a certain outcome, worrying that certain thoughts can have real-world implications (like making people sick), or blaming yourself for events that are totally out of your control. Responsibility is an important part of adult life, but if you're taking on blame for things you don't have any business in, you're not being rational.

7. They Use Minimizing Or Negative Self-Labeling

Cognitive distortion can also involve an understanding of all aspects of a situation, followed by a choice to completely ignore various bits of it or minimize them in order to focus on others, usually those that are negative or punishing. It's called "mental filtering," and Pscyhology Today boils it down to a tendency to "filter out the positives of an experience and dwell on the negatives and on the disappointments. This can, Psych Central points out, also go the other way: some people use the "rose-colored glasses" phenomenon to the extreme, refusing to contemplate the negatives of a situation in favor of excessively emphasizing the positives. That's not healthy or rational either.

If you think you may be experiencing irrational thoughts and find them highly persuasive, don't worry; it doesn't mean you're completely out of touch with reality as a whole. It's a good idea to confide in a therapist or medical professional who might be able to suggest good treatment options to bring more rational consideration into your thinking.