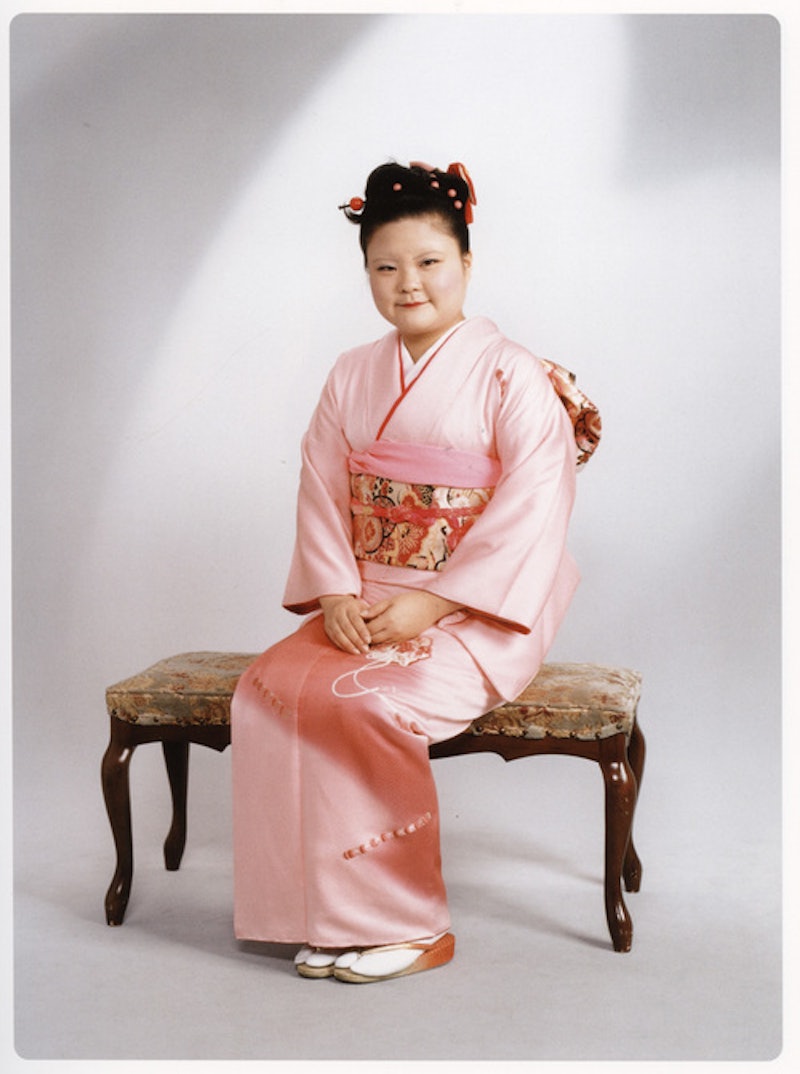 If you've dipped your toe into feminist photography, you likely know the most obvious names. Cindy Sherman, chameleon and conceptual portraitist, and photographer Annie Leibovitz (now largely known for her celebrity portraits, but with a rich and varied oeuvre) are the two biggest names; but if you want to dig a little deeper, there are very rich pickings, from America to Japan, from 1970s images of feminist rallies to recent defiant protests for women's rights written on female bodies. There will, by necessity, be many names left out, but if this is your starting point, it can take you in many new and exciting places in feminist photographic art.

What makes a photographic series feminist? In this context it's all about content and message; the artists, all female themselves, are attempting to shape the audience's perspective on female experience, rights, and challenges, whether it's drawn from life or produced artificially. (Trigger warning: some photographs are violent and contain images of domestic abuse.) Photography has always meant to be a way of getting to the truth, and even if some of the feminist art here is doing that via photo studios and posed creations, it's still aiming to get to the root of something particular about female repression and expression.

Here are nine feminist photo series from the 20th and 21st centuries that you need to know about. If you want to know more about feminist art, check out the archive at the Tate Museum or a summary over at the Art History Archive.

When photojournalist Abigail Heyman died in 2013, she was given an obituary in no less than the New York Times. "Ms. Heyman," the Times wrote, "was known best for her 1974 book, 'Growing Up Female: A Personal Photo-Journal,' a sort of illustrated encyclopedia of women performing self-limiting roles." The collection was filled with images of suffocating domesticity, from women in curlers to suffering mothers to Heyman herself having an abortion. The series gave Heyman her lifelong reputation as a feminist talent, and Growing Up Female remains a classic that every American woman should see at least once.

The Carrie Mae Weems "Kitchen Table Series" is famous; even if you've never seen it in person, you may have come across some of its images in histories of feminist art. Done in 1990, it was designed by Weems as a single-perspective series with one light source over a kitchen table, documenting the inner domestic life of a black woman raising a child, speaking to friends, and encountering different men as romantic partners. It remains seriously arresting.

To call "I Am Unbeatable" a series is almost cheating; Donna Ferrato has dedicated decades to documenting the impacts of domestic violence and abuse against women, beginning, as she told TIME in 2012, with a Playboy commission in 1982 that rapidly turned into a documentation of an abusive relationship. Since then, Ferrato has produced groundbreaking and deeply political photography of broken and recovering women's bodies, with I Am Unbeatable ongoing since 2007.

Photographer Liora K's "The Feminist Photos" went viral when the photo series was first published in 2012, popping up everywhere from The Huffington Post to Cosmopolitan. It's not difficult to see why: the simple style, which involved feminist statements about autonomy, bodily control, and women's rights written across bare female bodies, was easily digestible, immediate and visually startling. It has a particular focus on illegal abortions, but covers everything from rape culture to slut-shaming.

Artist Tomoko Sawada works with self-portraiture to look at gender, sexuality, and societal roles in a new, knowing way, but her OMIAI series is one of her most famous productions. OMIAI takes the form of a series of self-portraits, in the style favored by Japanese families in pursuit of suitors for their children (a process called omiai). Tomoko took on multiple "identities" as a bride in search of a husband, from traditional Japanese garb to modern business dress, all in a stiff photo-studio pose.

"Women Of Allah" is one of the great works of feminist Islamic art. The artist herself, Iranian photographer and painter Shirin Neshat, has been in political exile from Iran since 1996, and the "Women Of Allah" series was designed to articulate the contrast between traditional Iranian society and the restrictions of Islamic fundamentalism that took over the country after the Islamic Revolution. And, superficially, they're beautiful: pictures of women in traditional chador with rifles and bare hands and feet, all overlaid with delicate Farsi calligraphy.

The focus of Sara Naomi Lewkowicz's photo series was unintentional: what was meant to be a documentation of the problems of life after prison rapidly become a series about domestic violence after one of the subjects, Shane, became violent with his partner Maggie in front of the photographer and Maggie's children. "In that moment," Lewkowicz told the Alexia Foundation, "my instincts as a photojournalist kicked in. I knew I had to stay with the story and document it in all of its ugly truth. If Maggie couldn't leave, neither could I. I documented the entire attack and its immediate aftermath." The photo series was published in TIME in 2013 and went on to win a World Press Photo Award in 2014.

British artist Jemima Stehli's "Strip" series is a fascinating perspective on the male gaze, female bodies and power in images; the series, created in 2000, featured Stehli in a studio with a collection of men she knew, each of whom watched her strip while controlling the camera. As she took off her clothes, they chose the precise moment at which to take the shot. Some went for the fully-clothed portion, others for the part where she was completely naked; but it's still an astonishing meditation on viewing and voyeurism when it comes to the female body in the world.

This isn't a photo series as much as it's "the entire working life of the photographer". If you do know photojournalist Bettye Lane's work, it's likely her famous photographs of the Stonewall riots, which have come to symbolize the entire struggle as it unfolded in 1969. Lane also, however, was strongly interested in the women's movement, and would document everything from marches and placards to the first female bus driver in New York and portraits of Gloria Steinem. If there was one documenter of the history of first and second-wave feminism in America, it was Lane. The Schlesinger Library at Harvard has one of the world's most comprehensive collections of Lane's work, largely thanks to the journalist's own donations, explaining that "Lane recorded women’s efforts, triumphs, and defeats for more than 30 years."

More like this
Sandra Bullock, Girlboss Extraordinaire
By Matt Harkins & Viviana Olen
Your Moon Sign, Explained
By Nina Kahn
The 'Hocus Pocus' Sequel Finally Has A Release Date & It Makes Total Sense
By Shannon Barbour and Radhika Menon
Here’s What Sarah Jessica Parker’s Canned Cosmo *Actually* Tastes Like
By Emma Garza
Get Even More From Bustle — Sign Up For The Newsletter