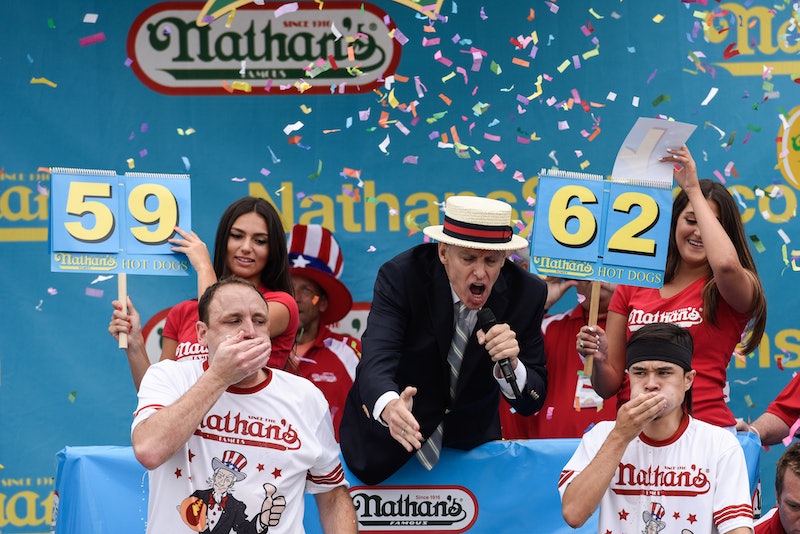 Nothing says America more than gorging yourself until you're uncomfortably full. With 70 dogs downed, Joey Chestnut won Nathan's Hot Dog Eating Contest Monday beating his personal record for the competition at Coney Island. In the women's contest, Miki Sudo took home the champion's mustard belt with 38.5 hot dogs eaten. The competitive eating contest is a popular event that has been held every year on the Fourth of July since the early 1970s.

It's unclear exactly when exactly watching 12 contestants chow their way through as many hot dogs as possible in just 10 minutes became synonymous with American patriotism, but competitive hot dog eating is practically a national pastime at this point. Spectators, fans, and competitors gathered at Nathan's Famous flagship restaurant on Surf and Stillwell Avenues in Brooklyn, New York, this Fourth of July to see which man and woman would eat their way to the coveted mustard belt.

This year's main event saw last year's winner, 24-year-old Matt "the Megatoad" Stonie, return to defend his victory against eight-time champion Joey "Jaws" Chestnut, who is largely credited with popularizing the contest with his lengthy winning streak. With unparalleled speed, Chestnut broke away from Stonie early in the contest to gain a whopping eight-dog lead over the defending champ. Stonie finished in second place with 53 hot dogs.

In last year's contest, Stonie defeated Chestnut in a surprising upset by demolishing 62 hot dogs to Chestnut's 60. But 32-year-old Chestnut downed 73.5 hot dogs — buns and all — in 10 minutes during a qualifying event in Washington D.C. on June 25 to set a new record in competitive eating and really put the pressure on Stonie going into Monday's contest. The previous record was 69 hot dogs and also set by Chestnut during a Nathan's Hot Dog Eating contest in 2013. Despite Chestnut holding the record for most hot dogs eaten, Stonie was ranked the top competitive eater in the world ahead of Monday's contest. Both men hail from San Jose, California.

In the woman's contest, Sudo returned to defend her title against three-time champion Sonya "The Black Widow" Thomas, who ate 35 dogs this year. Coming in third was "The Lovely" Juliet Lee with 27 hot dogs. Sudo, a Las Vegas resident, is ranked the third best competitive eater (behind Stonie and Chestnut) by Major League Eating, the governing body overseeing the sport of competitive eating.

Along with a year's worth of bragging rights and their champion mustard belts, Chestnut and Sudo will each take home $10,000 in prize money.