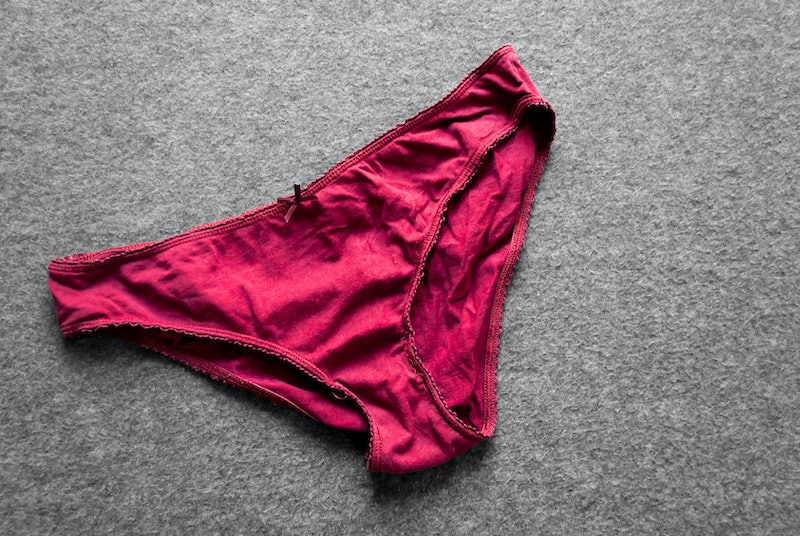 The internet has revolutionized the way people communicate and live their lives, but sometimes I’m convinced that it was created primarily to shame women about their completely normal, healthy bodies. We’ve had the Collarbone Challenge, the Underboob Challenge, the Bellybutton Challenge, the Bikini Bridge Challenge, and now... the “Panty Challenge.” While these previous internet challenges sought to judge women according to utterly arbitrary standards of beauty (that essentially equated beauty with thinness), the Panty Challenge adds a new source of body shaming to the mix: Vaginal discharge. The challenge dares women to post images of their used underwear on social media, showing that the lining is free of vaginal fluids. If there’s nothing on the underwear, the logic seems to be, then you have a “clean” vagina.

Excuse me while I roll my eyes so hard my head explodes.

The key problem with this “challenge” (other than the fact that what is going on in other people’s under garments is absolutely none of our business) is that, of course, there’s nothing dirty about vaginal discharge, and a lack of it doesn’t mean that a woman’s vagina is somehow “cleaner” than others.

It’s important to note that, for all the buzz it’s getting, the Panty Challenge doesn’t actually seem to have many participants. Leigh Cuen at Mic points out that the Panty Challenge seems to have started with one woman’s Facebook post, in which she boasted about how her discharge-free panties proved how “clean” her vagina was. (I keep using quotation marks around “clean” in this context because, again — and I cannot stress this enough — “No discharge” does not equal “clean vagina.”)

There seem to be a lot more critics of the challenge than actual challengers. Many people have taken to social media to point out just how ignorant and misguided the whole premise of the Panty Challenge is.

Although (thankfully) this challenge doesn’t seem to have led to a rash of people posting underwear pics online, it does highlight how important it is for women to have a strong understanding of vaginal health, as well as how prevalent misconceptions of vaginal cleanliness continue to be. We live in a culture that often portrays vaginas as inherently dirty — in the past, women have been told to douche (despite the fact that douching is really bad for you), to use scented tampons, to use deodorant sprays, all to satisfy a vague notion that vaginas in their natural state need to be corrected somehow, that they are not already in themselves exactly what they should be. But this is, of course, false. Vaginas are self-cleaning (like ovens!). Yes, there are a few things you can do make sure your genitals stay happy and healthy, but for the most part, they really do take care of themselves.

So let’s take this ridiculous Panty Challenge as an opportunity to remind each other of an important fact: Vaginal discharge is not, in itself, an indication that there is anything wrong with you or your vagina. In fact, it’s often an indicator that your reproductive cycle is working normally. Vaginal discharge comes from your vaginal and cervical glands, and it helps to keep your vagina healthy. As Emma Kaywin, a sexual health writer and activist, wrote for Bustle in March, the fluid that makes up vaginal discharge “clears away bacteria and dead cells as it flows through your vaginal canal and out into your panties. That’s right, this goo is your home-grown vaginal cleaning tool, and it's all you need to stay clean.” The consistency and abundance of discharge can change according to where you are in your menstrual cycle. As your hormones fluctuate throughout the month, so do your vaginal fluids.

One thing is certain, however: You are the best expert on what’s normal for your body. And, despite what the so-called “Panty Challenge” says, vaginal fluid is not a sign that anything is wrong with you. Usually, it’s a sign that your vagina is doing what it’s supposed to do.