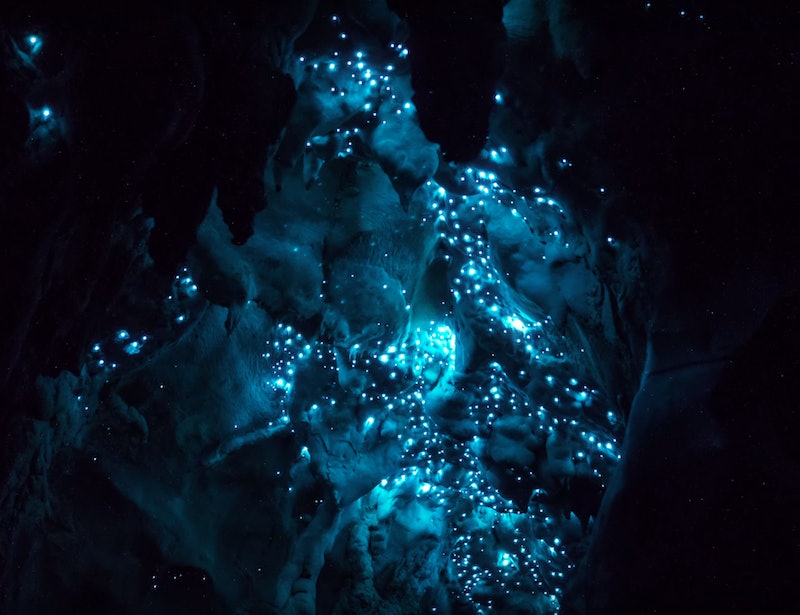 Arachnocampa luminosa is a gnat species native to New Zealand. These small insects look like normal mosquitos as adults, but, as larvae, they are proof that sometimes real life is stranger — and more fascinating — than science fiction. These insects — the glowing worms of the Waitomo Caves — create a web that mimics the night sky. Together, these bioluminescent bugs make a canopy of “stars” inside their caves, a display that is at once breathtakingly beautiful, and also super creepy.

According to KQED Science, the glow worms in the Waitomo Caves emit light the same way that fireflies do, through a chemical reaction. But while fireflies use their light to find mates, these carnivorous worms use light to trap other insects and eat them. In their caves, the worms produce long, sticky filaments that hang from the ceilings, each dotted with little balls of sticky mucous. The filaments act as a web, catching insects that happen to be passing through.

The glow worms use their light to confuse and attract moths and other insects that use the light of the night sky to navigate. By mimicking a starry sky, the worms entice the moths to fly into their curtains of gluey strings.

Once the insect is caught, it may struggle, but its thrashing about only exposes it to more sticky mucous, trapping it even more firmly and filling its airways. The worm slowly draws in its prey, and when the worm begins to eat, breaking through the victim’s exoskeleton with its teeth, its prey is often still alive.

This video, part of KQED’s Deep Look series, shows the glow worm in all of its beautiful, surprisingly gory action:

Strangely, the unique larval stage of the Arachnocampa luminosa is a lot longer than its actual adulthood. The larvae live and glow in their caves for nine months, building their sticky webs and feeding. When they finally mature, transforming into what look like big mosquitos, they only live for a few days, long enough to mate and lay eggs. The adults don’t even have mouths — their sole purpose is to reproduce and die.

Though the life of a glow worm seems a bit grim — devoted to killing and eating other insects before maturing and immediately dying — the natural beauty of its bioluminescent “sky” is undeniable.

Watch the video above for a mesmerizing time lapse of the creatures. If you happen to be heading near New Zealand anytime soon, you can even visit the Waitomo Glowworm caves via boat.

More like this
How To See The Lunar Eclipse On May 15-16, 2022
By Kaitlyn Wylde
What Is “Night Luxe?” Breaking Down TikTok’s New Aesthetic
By Courtney Young
The 10 Best Cat Puzzle Feeders
By Lauren Moison
My Picky Eater Dog Absolutely Devours This All-Natural Food
By Allison Berry
Get Even More From Bustle — Sign Up For The Newsletter