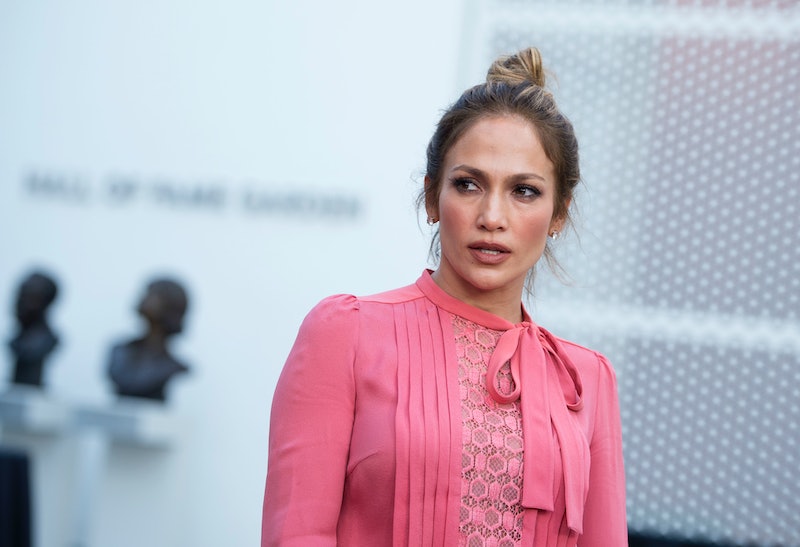 While much of the United States is spending its July 4th eating, drinking, and making merry, two musical celebrities have taken a more somber approach to celebrating Independence Day. "Love Make The World Go Round" is a new song from Jennifer Lopez and Lin-Manuel Miranda honoring victims of the Pulse nightclub shooting. Both artists revealed their collaboration on Twitter on the Monday holiday.

The full song hasn't been released yet, but Miranda and Lopez shared a video featuring a snippet of the song and some footage of its creation. "Love Make The World Go Round" features the Hamilton creator rapping about overcoming hatred and fear through pride and celebration along with a catchy and inspiring chorus from J.Lo. Here's a snippet of Miranda's lyrics from the promo:

"What we got is love even when the sinners hate us / We cannot let them diminish or intimidate us / We sing out, we got the rhythm and the true on our side / We cut through the divide and we do it with pride. A generation of innovators enabled to patiently wait for change 'cause change is what they've been afraid of / the malevolence can wait, raise a level of debate, celebrate, elevate."

Proceeds from the song will go to the Hispanic Federation's Proyecto Somos Orlando, a charity providing bilingual mental health and other services to those affected by the June 12th mass shooting that took 49 lives, many of whom were LGBTQ and Latino. Both Miranda and Lopez, two of the most recognizable Hispanic celebrities in US pop culture, have been outspoken supporters of the LGBTQ community. Lopez received Vanguard Award from LGBTQ media representation organization GLAAD, while Miranda has been very active in the response to Orlando. His speech at the Tony Awards A following the tragedy went viral with the message that "love is love is love is love."

If you are interested in supporting Proyecto Somos Orlando, or interested in hearing a collaboration between two of your favorite artists, you might want to know when and how you can buy the song. The promo video ends with the words: "Coming soon. Get it at iTunes.com/jjlo." From that hint, I imagine that "Love Make The World Go Round" will be available to buy within the next few days. I doubt it will be streaming anywhere, since it's a benefit song, so those wishing to buy it should head to Jennifer Lopez's iTunes page when the release is announced. In the meantime, you can support Somos Orlando by donating here.