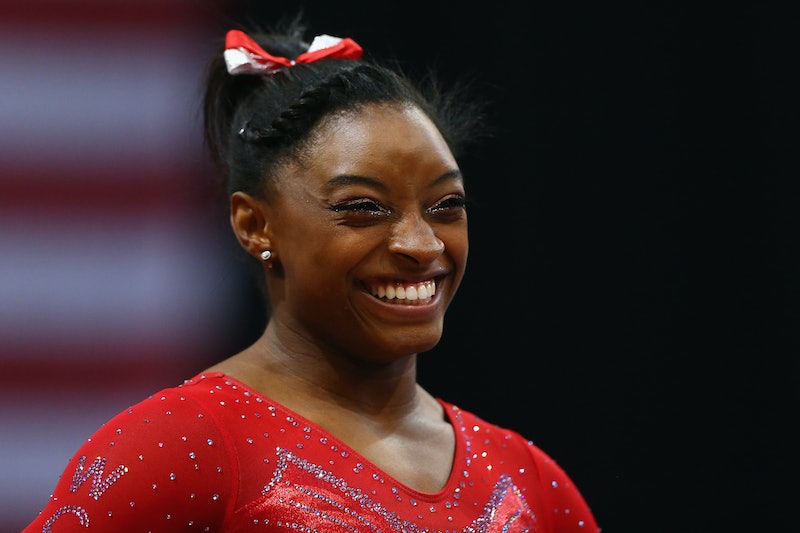 Without a doubt, 19-year-old gymnast Simone Biles will be one to watch for at the 2016 Olympic Games. Routinely dubbed "The Best Gymnast in the World," Biles could win five gold medals in Rio this year — as long as she officially makes the five-woman team, which will be announced next week (as the three-time all-around World Champion three years in a row, yeah, I'd say she has a pretty good shot). In the meantime though, Biles is just a regular 19-year-old, killin' it both on the mat and on social media. So for fans wondering what Simone Biles' Snapchat name is, look no further — I gotchya. This is going to come in handy during the Games, when she inevitably makes the team and Snapchats her way through Rio. So ready!

Back in 2014, the crazy talented gymnast shared her Snapchat name on Twitter, and lo and behold, it's her first and last name: simonebiles. As for what fans can expect by adding Biles on the app, picture a combination of Snapchat's hilarious filters (she's a fan of the puppy faces) and behind-the-scenes action of her being a badass, world champion gymnast. (Casual.) In many ways, Biles is just a typical 19-year-old with a Snap story — only with the added twist of being an insanely talented athlete most likely headed to the Olympics.

If Biles, in fact, makes the Olympic team, there's no doubt in my mind that she'll be Snapchatting her way through the Games, sharing everything from face-swaps with her teammates to footage of her gymnastics routines. But let's be real: It's the behind-the-scenes footage that everyone really craves, little glimpses into the life of the Olympic elite and what it's like to be an athlete competing in such a highly regarded and coveted event.

And if Biles' Instagram is anything to go by, it looks like fans can expect exactly that in her tour of the Olympics via Snap story. I mean, just look at this mesmerizing video of her climbing the rope crazy fast:

And truth be told, there's no doubt in my mind that at some point during the Games in Rio, we can all expect to see a Snapchat photo similar to this bad boy — which shows Biles rocking a whopping 14 medals around her neck, proud AF of her hard work and the champion that she is:

So get ready, guys: Add simonebiles to Snapchat now, and just wait for those Snap stories to roll on in — especially during the first few weeks of August. They'll definitely be ones to watch.