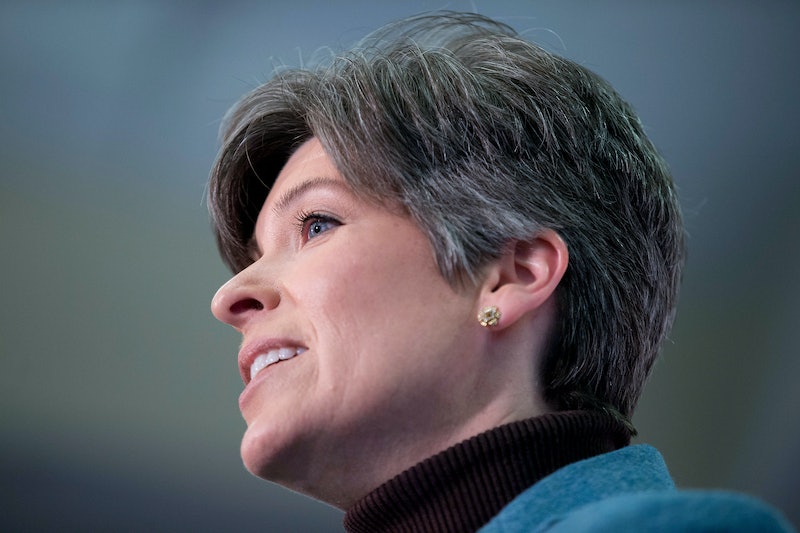 A whole lot of names have been floated as possible running mates for Donald Trump, and July 4 brought us a fairly new one: Joni Ernst. The junior senator from Iowa is on Trump’s short list, according to CNN, and the two met in New Jersey for what Ernst called “a good conversation” on the fourth of July. The arguments for Ernst as Trump’s vice presidential pick are compelling on the surface, but at the end of the day, there’s ample reason to be skeptical that a Trump-Ernst ticket will ever come to be.

The case for Ernst is simple: She’s from a swing state, has experience in government, is a veteran, and possesses the kind of brash charisma that Trump seems to place a high premium on. For example, Ernst ran an ad during her 2014 Senate campaign that highlighted the time she spent in her childhood “castrating hogs on an Iowa farm.” This experience, she said, made her the ideal candidate to cut pork barrel spending in Washington.

“Washington’s full of big spenders,” a smiling Ernst says in the commercial. “Let’s make ‘em squeal!” A pig can be heard shrieking in the background as the ad fades out.

That kind of straightforward crudeness is Trump’s modus operandi, and it makes sense that he’d want a similar attitude in his running mate.

However, it’s far too soon to call Ernst the frontrunner for the spot, or even consider her to be one of the top contenders. For one, it’s not clear that she wants the job. A senior Trump adviser told CNN that, while Ernst is under consideration, she hasn’t indicated a definitive interest in being Trump’s running mate, “as opposed to others who have said, ‘Thanks, let’s play ball.’” Ernst didn’t endorse Trump in the primaries, and after he clinched the nomination, only offered a lukewarm “I will be supporting the nominee”-type endorsement.

Likewise, we shouldn’t quite take it for granted that Trump sees Ernst as the best choice. He’s said that he wants a running mate with government; Ernst has been a US Senator since 2014, and while that’s not for nothing, Trump might want somebody with a bit more Washington know-how.

Furthermore, the Trump campaign hasn’t confirmed that it’s formally vetting Ernst. This might not mean much, but it’s relevant to note that another possible Trump pick, Indiana Gov. Mike Pence, is undergoing the formal vetting process, according to CNN’s reporting. It would be premature to read too much into this difference, of course, but it does highlight the fact that as of now, it's unclear how seriously the Trump campaign is actually considering Ernst.

But really, who knows? At the end of the day, it's Trump who gets to make this decision. And nobody knows what goes on inside Trump's head other than Trump himself.