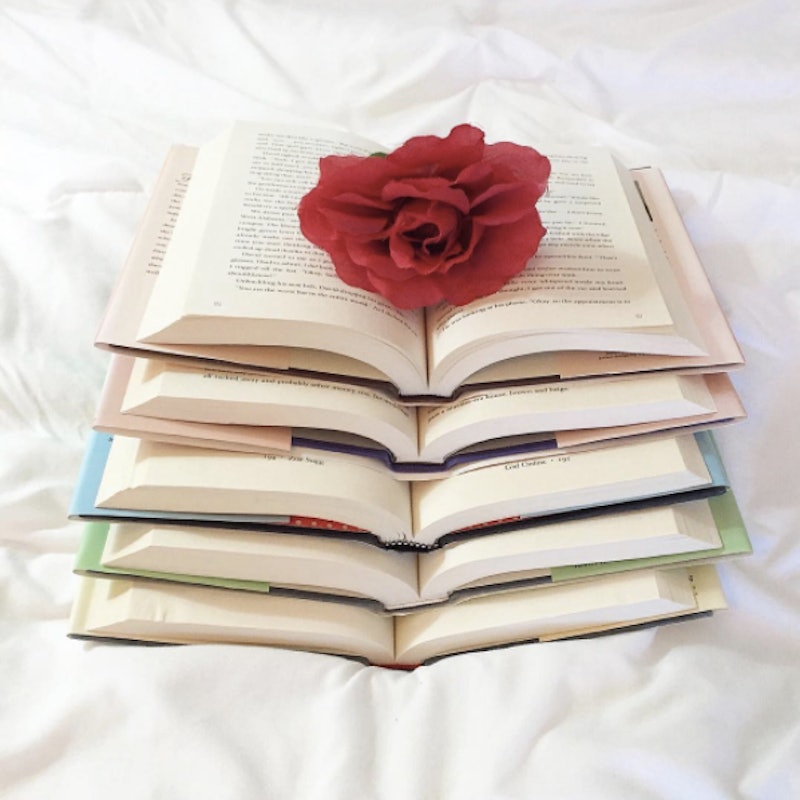 I've said it before, and I will say it again: I love romance novels, and I'm not ashamed to admit it. And although many people think they exist on the polar opposite ends of the earth, after years of enjoying these books, I've learned that reading romance empowers my feminism in more ways than one.

Like so many other people before and after me, I didn't think there was a way to reconcile my feminist ideals with my love for romance novels. How could I say I believed in women's equality when my bookshelf was filled with stories about misogynistic men taking the power from innocent damsels in distress? How could I claim to care about a women's right to chose what happens with her body when, on my nightstand, there's a book about a young girl whose forced to do things she doesn't want to do? I didn't think there was room in my library for romance novels so long as I claimed to be a feminist, but that was before I realized feminist romance novels exist in droves.

When it comes to the romance genre, like any other genre, there's a huge variety of books that exist within it. And while the genre is disparaged for reinforcing traditional gender and power roles, modern romance novels are turning that notion on its head. For readers and feminists like myself, people who are looking to avoid stories about sexual aggression towards weak-willed women, there are shelves upon shelves of romance books that star brilliant, successful, sexually active women who make their own choices and play the most important role in their own stories.

From Courtney Milan's The Suffragette Scandal , which stars a victorian-era suffragette and all-women's newspaper publisher and her supportive lover to Elizabeth Essex's Almost a Scandal , a sexy novel about a young woman who disguises herself as a man and joins the British Navy, to Jenny Cruise's Manhunting, a modern day love story about an ambitious woman who uses her business skills to try and find love, there are plenty of romance novels that don't involve ripped bodices, ravished virgins, and borderline sexual assault.

Modern romance novels are books about women, by women, and for women. Unlike so many other genres, romance isn't dominated by men — not the stories, not the characters, not the authors. As romance author Jennifer Cruise points out in a blog post on her website, "Most of my academic reading convinced me that fiction reflected male worlds told by male authorities. But once I read romance, I found that even the most abysmal examples of the genre took place in my world, a world of relationships, details, and victories that balanced my defeats." While science fiction, fantasy, and even high brow literature is often (thought not always) centered around the male experience, romance gives women stories centered around their own. They provide narratives that star women, concern women, and are driven by women. Does storytelling get more feminist than that?

It does, in fact, when you start to consider the sexual components to romance novels. While many critics will argue that the sexual interactions in romance novels reassert male dominance, a good romance novel — a feminist romance novel — will instead focus on the woman's pleasure and sexual satisfaction, not just the man's. By telling stories that involve women embracing their sexual sides, women enjoying sex, and getting pleasure out of it without guilt, shame, or judgement, romance novels are empowering female readers to do the same. Romance novels celebrate female sexuality and pleasure, and encourage women to follow suit by setting powerful examples through sexually liberated characters.

Speaking of characters, the heroines of romance novels have changed over the years and have transformed into feminist rock stars. Romance novels focus on strong powerful women who make the decisions about their own lives. They drive the action, they make the choices, they decide who to love, when to love, and how to love. They're empowering women who radiate power, strength, and yes, feminism.

More than anything, though, romance novels give feminists like me the happily ever after I can't find in the real world. They provide a story whose ending includes orgasms, career success, love, respect, family — yes, women "having it all," mind-blowing sex, equality and all. These paperback books may not have pages and pages of feminist theory, but they do have the ability to empower this feminist.