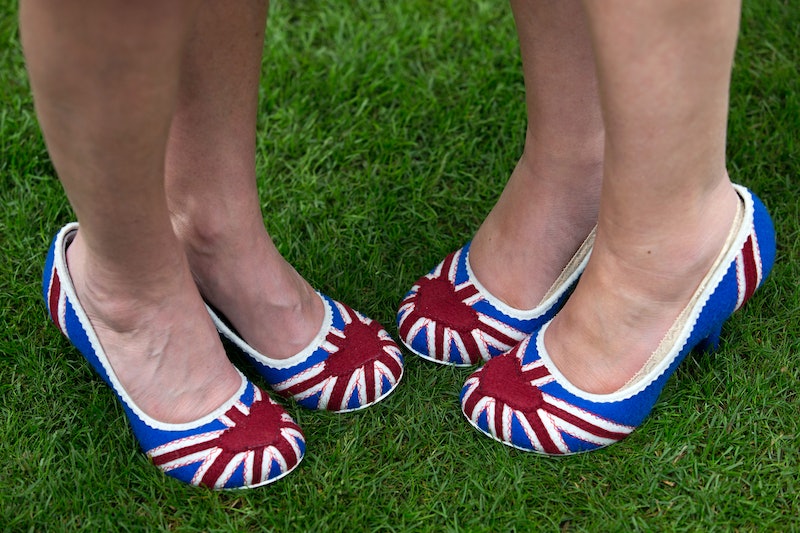 In a new web-exclusive segment for Last Week Tonight, John Oliver reminds America of its undeniable British roots, saying the Fourth of July should stand as an annual reminder of all of the things the United States left behind when it kicked British rule out of the country. But ultimately, he concludes that, in reality, the United States did the right thing in saying "Cheerio" to the United Kingdom. Yet that doesn't stop Oliver from going over, line by line, all the British things Oliver knows America is trading — like pessimism — in exchange for our yearly barbecues and fireworks.

Oliver starts off with the obvious: no cool British accents (he points out that Americans "speak like you just burned your tongue on a hot apple pie"), bowler hats ( "perfect for dressing your head like a circumcised velvet penis"), or typical English cuisine (a meat pie, for instance, that perfectly replicates the English experience by boasting a hard exterior, filled with composure, that actually masks a "hot mess"). But he says there is one difference that sticks out above them all: a glaring and unfortunate lack of typical British pessimism.

The thing Americans are really missing out on is pessimism. Americans are optimistic people who believe the sky is the limit. Whereas in Britain, we are painfully aware of our limits. In fact, just look at the British sky itself — even the sun is incapable of asserting itself there.

British people never make the mistake of developing self esteem. Because no matter what we achieve, deep down, we know we'll never be as good as the Queen. Which is to say, an elderly woman who frowns for a living.

Jokes aside, you can see that this particular brand of British pessimism Oliver discusses is prevalent in other forms of comedy, too — all the way from Shakespeare's tragedy-turned-comedies to the biting, dry humor of Monty Python. This stark difference between British and American comedy is emblematic of our cultural differences — as TIME put it, America is quick to pat itself on the back for a job well done, whereas England roots for the underdog, but believes "failure and disappointment lurk around every corner."

With this in mind, Oliver reminds his largely American audience that "Honestly, you are probably way better off the way that things are." But really, what's Independence Day without a bit of the queen's characteristic scowl to top it off?