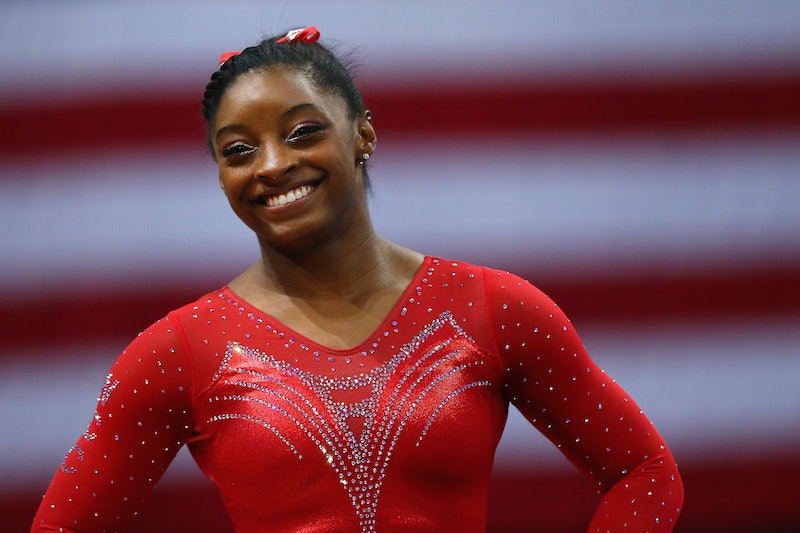 In the opening pages of my young adult novel Tumbling , the announcers note that among the fictional gymnasts at the Olympic Trials, there are “veterans versus brand new baby seniors...event specialists and all-arounders...comebacks and likely breakout stars...and (those) destined to be called.”

In Tumbling, five gymnasts — Grace, Leigh, Camille, Wilhelmina, and Monica — push toward their goal of competing in the U.S. Olympics. By the end of the two day-long trials, some of them will be Olympians on the road to glory... and others will go home with absolutely nothing. Through this emotional, exerting two-day stretch, readers will learn about these young athletes' motivations, relationships, and goals. None of them will walk away from the trials the same person they were before.

Tumbling is fictional, but the high-pressure world of gymnastics is very, very real. As we get closer and closer to the 2016 Summer Olympic Games, these same distinctions are forming among real life elite gymnasts in the USA. When the U.S. Olympic trials begin on Friday, July 8, these athletes will compete for five spots on the team and three alternate spots. Let's break down who's who before the trials begin:

We all know Aly Raisman as the three-time Olympic medalist from the 2012 games. More recently, she won the 2016 US Secret Classic and came in second in the 2016 National Championships — proving that even time cannot stop this gymnast. She still shines on beam, vault and especially floor. Check out her upgraded opening tumbling series at the 2016 Pacific Rim Championships above.

Reigning all-around Olympic Champion Gabby Douglas is still in the game. She came in second (to Simone Biles) in the 2015 Secret US Classics, and later won the 2016 AT&T American Cup. She’s still an all-around superstar but her bars routine might be the thing that clinches her spot on the team. She does an inverted giant straddle swing to a handstand on the low bar. Here it is at the 2015 World Championship Event Finals.

Ragan Smith won’t be 16 until August, making her one of the youngest Olympic hopefuls. She’s coached by Olympic Medalist Kim Zmeskal which explains her precision even on the most difficult tricks like her back somersault with a full twist on beam. Here it is at the 2016 US Secret Classics.

The US traditionally struggles most on uneven bars but Madison Kocian aims to change that. At the 2015 World Championships, she placed first on the event in a historic 4-way tie with three other (Russian and Chinese) gymnasts. But teammate Ashton Locklear is right on Madison’s heels hoping for a place on the Olympic team as a bars specialist. Madison’s routine is particularly impressive right at the front. Check out how well connected her opening skills are!

While the US has traditionally struggled on bars, it has shined on beam. But this year we’ve lost many of our most powerful vaulters. MyKayla Skinner — often known as a gym “daredevil” — has always been one to try the most difficult vaults. Check her out at the 2016 Glasgow World Cup.

At the 2016 Secret US Classics, announcer Tim Daggett called Simone Biles the “most dominant athlete in the world today, any sport, male or female.” She has won every all-around competition she’s entered since 2013. Simone is thrilling to watch and will certainly compete all events in the 2016 Olympics. You should watch her every move but for now settle for this full twisting double dismount on balance beam.

Maggie Nichols was looking like another huge gymnastics star when she placed second behind Simone Biles at 2015 Nationals and second behind Gabby Douglas at 2016 American Cup. But since then, Maggie has suffered a knee injury which required surgery and been unable to compete. She returned to the gym for the 2016 Nationals, but did not look as solid as her fans had hoped. She’ll try to look stronger at the Olympic Trials.

At the start of the year, Ashton Locklear wasn’t on anyone’s radar. Flo Gymnastics ranked her 24th among Olympic hopefuls. But after winning the uneven bars in three major 2016 competitions (The City of Jesolo Trophy, the Pacific Rim Championships and the Secret US Classics) Ashton has established herself as huge competition for other bars specialist, Madison Kocian. Flo Gymnastics now ranks her sixth, ahead of Kocian. Check out her skills between the bars, and the way she manages to get her feet in between her arms.

An ankle injury during podium training at the 2014 US Nationals seemed to slow this gymnast down. But Rachel Gowey managed to place second at the 2016 US Secret Classics behind only Aly Raisman. With a powerful vault and solid uneven bars, Rachel Gowey might end up being what Team USA needs. If someone is going to surprise us, it might be Rachel Gowey.

So who are those destined to be called? Simone Biles is the only name I’d bet on right now. There are still so many questions in the air: Do Aly Raisman and Gabby Douglass have the stamina to keep competing at this level after so many years? Will the Olympic Committee pick Ashton Locklear or Madison Kocian as the bars specialist? Or will they fill the team with more well-rounded athletes like Ragan Smith or Laurie Hernandez? Will Maggie Nichols come back from her injury strong and ready to compete? Will MyKayla Skinner or Rachel Gowey or someone else surprise us?

I can’t wait to watch the the Olympic Trials and find out!

Caela Carter is the author of Tumbling, a novel about teen gymnasts competing in the Olympic Trials, available wherever books are sold.

More like this
16 Novels That Paint A Realistic Portrait Of Abortion
By K.W. Colyard
What Is Barack Obama’s Net Worth? He Makes *Way* More Now As An Ex-President
By Hugh McIntyre
The Time Traveler’s Wife Book Has A Heartbreaking Ending
By K.W. Colyard
'Bridgerton' Season 3 Includes A Major Cast Shake-Up
By Grace Wehniainen
Get Even More From Bustle — Sign Up For The Newsletter