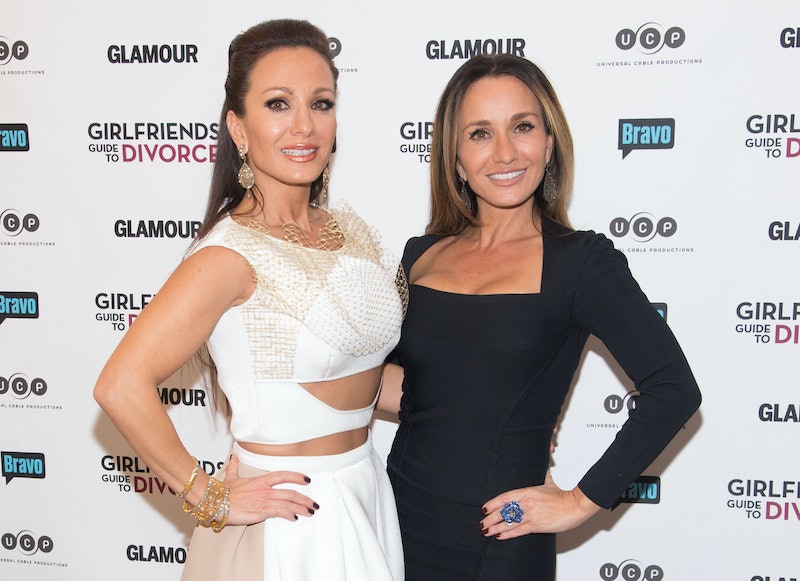 A new season of Real Housewives of New Jersey is on its way, and with it, there are a few cast changes, including the apparent elimination of twins Nicole Napolitano and Teresa (te-RAY-sa, if you don't remember) Aprea, who are missing from the trailer. But why won't Nicole or Teresa be in RHONJ Season 7? The twins certainly caused a lot of drama — even ending the season with a pretty big feud with Teresa Giudice — and they're exactly the kind of loud, emotional characters fans have come to expect from Real Housewives of New Jersey.

Though this report has not been confirmed, Real Mr. Housewife said that an unnamed "production insider" claimed that Teresa and Nicole weren't asked to return because "production is thinking of going in a different direction this season and going back to the show’s North Jersey roots." According to the alleged insider, Teresa and Nicole live an hour away from the rest of the cast, making it hard to incorporate them into the series. Bustle's request for comment from Bravo on this report and the twins not being in Season 7 has not yet been answered.

The twins haven't commented on whether this report is accurate, but Nicole told Bravo's The Daily Dish in February that she and her sister have made up with Teresa and they are all on good terms, so whatever the cause for the twins not returning, it shouldn't have anything to do with the drama we saw last season. And according to Reality Tea, back in October before casting decisions for RHONJ Season 7 were made, the twins discussed returning on their podcast, Girls in Heels, and Teresa wasn't exactly excited at the prospect. "If the contracts are right, we’ll see ... I won’t do it unless it’s SO WOW. Otherwise, it was a lot of stress for me," she said, and also revealed that the twins were working on a pilot of their own.

Still, Nicole and Teresa have been very grateful for the support from RHONJ fans on Twitter.

However, Teresa did tweet that she and Nicole may be making an occasional guest appearance on RHONJ — that is, if it doesn't wind up on the cutting room floor.

But it doesn't sound like there's even the slightest chance that the twins will wind up playing anywhere close to the role that they did during Season 6 — especially since they are not listed as part of the Season 7 cast on Bravo's website. Teresa tweeted that one season was more than enough, while Nicole simply deferred to an emoji when a fan asked if the twins won't appear.

So, even after an explosive debut season, it seems that Nicole and Teresa will not be returning to Real Housewives of New Jersey as cast members and they're not too broken up about it, either. Whatever the reason, I don't think the change will bother these strong-willed, always tough ladies.