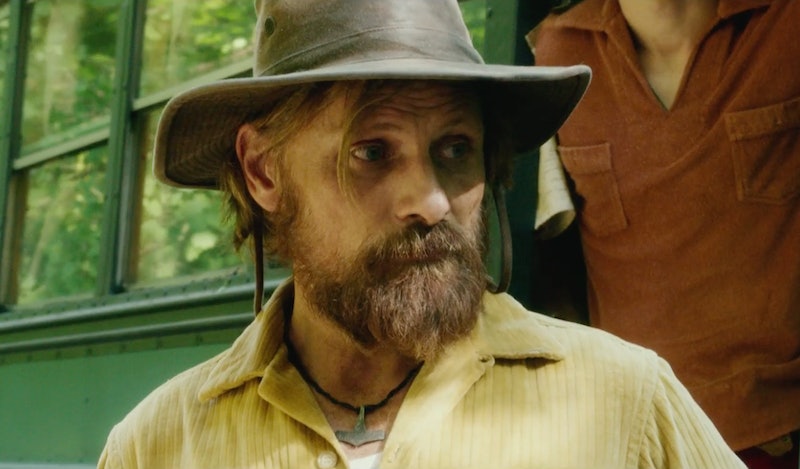 Nearly everything about the new movie Captain Fantastic is so odd — from the family patriarch who teaches his children about the philosophy of Noam Chomsky, to the 5-year-old who loves to play with knives and animal skulls — that it seems almost too weird not to be true. After all, it's not unheard of for a family to move completely off the grid. In Captain Fantastic, out July 8, the man who moves his family of six children out into the wilderness is Ben (Viggo Mortensen), a hippie to the max and a believer in education and knowledge without boundaries. He and his children live on land in the Pacific Northwest, where they hunt using bow and arrows and cultivate their own food. Ben's unorthodox methods are just reasonable enough for one to wonder, is Ben in Captain Fantastic based on a real person?

Though Captain Fantastic writer-director Matt Ross admitted that he was somewhat inspired by his own experiences growing up with a "hippie" mom in an interview with Variety , he also said that the main inspiration for the film came not from a real person, but from his desires as a father. "It's much more about my personal grapplings with being a dad and my desire to be a good one," Ross said. For the filmmaker, the character of Ben, a man so entrenched in his children's lives, is a kind of wish-fulfillment. "We all straddle our professional and personal lives. I fantasize about being able to devote my entire existence to my kids."

Speaking with NPR on Fresh Air , Ross expanded on his personal connections to Ben. "I think if the movie is about anything, it's really about the choices we make as people, specifically as parents," he said. Speaking about his mother, who took him and his brother to various "alternative living" situations — some might call them communes — Ross added, "She clearly wanted us to be connected to certain things that we would not be connected to if we lived in an urban environment."

As for Mortensen's own connection to the character, the actor actually shared quite a few traits with Ben. He might not live in the wilderness, or cut himself off completely from the outside world, but, he knew his fair share about hunting and surviving in the wild before signing on to the project. "I've never lived exactly like these characters do. But I wasn't uncomfortable," Mortensen said in an interview with the LA Times . Mortensen also related to some of Ben's ideology, right or not. "Even though some of the things he does are extreme and some of his methods I wouldn't use, I did find something I really admired about him," he said.

Ben's parenting in Captain Fantastic might be admirable, to a certain degree, but it's probably for the best that he isn't actually based on a real person. Some extremes shouldn't be tested.