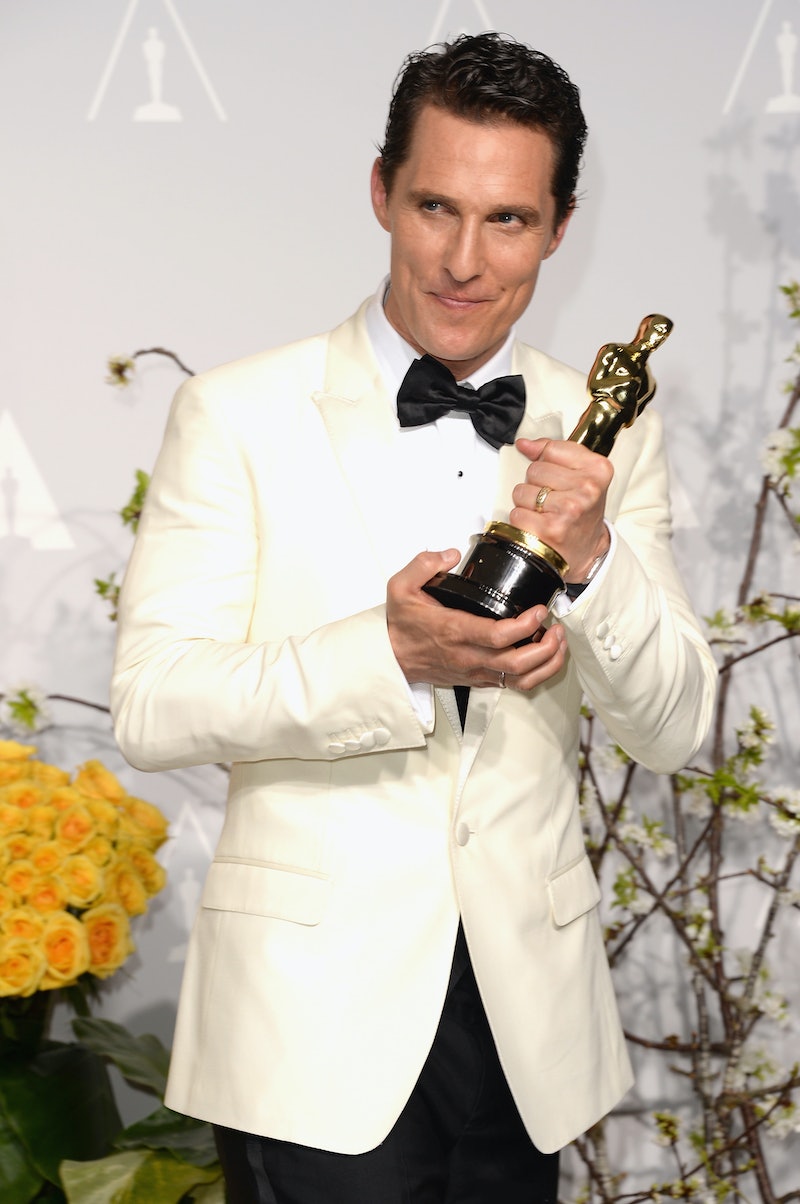 Matthew McConaughey is a man of contradictions, and his Oscar acceptance speech was just another notch in the long line of "what the hell McConaughey?" moments. It's so surprising and wonderful to see an actor known for his abs and his penchant for playing the male lead in romantic comedies win big at the Oscars, but throw him onstage without a script and the result is well, what we saw last night at the Oscars. You can take the man out of How To Lose A Guy In 10 Days, but you can't take the How To Lose A Guy In 10 Days out of the man. Matthew McConaughey's Oscar acceptance speech was a hot mess of confusing concepts, weird self worship, and a lil bit of alright alright alright. It's hard to know what to make of it.

The Internet has a lot to say on the matter. Salon summed it up best in comparing McConaughey's speech to Lupita N'yongo's, noting that one addressed the tragedy that inspired the movies they won for respectively, and one... well, one quoted Dazed and Confused. McConaughey's bizarrely long and confusingly organized acceptance speech is worthy of analysis, mostly because if I don't think about it really carefully I might never understand exactly what happened on that Oscars stage. Here is a moment by moment account of my reaction to what came out of Matthew McConaughey's mouth at the Oscars.

0:53- There seems to be an underlying assumption that all of the 6,000 academy members voted unanimously to give you that award. This is unlikely to be true.

1:28- How does this relate? Has this turned into a life-coaching session or are you accepting an award? Tell you who you need to thank, not what you generally need. Also...someone to chase? Say wha? Chase like a dog going after a ball? Chase as in romantically pursue? What does it all mean?!?!?!?

1:42- Dear lord, it's going all gospel up in here. I would argue that being successful in movies is most certainly an opportunity made by the human hand. Loads of human hands, in fact. I feel like John Belushi in the church scene from the Blues Brothers, do you see the light? DO YOU SEE THE LIGHT?!!??.... No.

1:48- Oh. my god. Did Matthew McConaughey just quote... science? Maybe there is a god after all. But "gratitude reciprocates" is an unusual aspect of science to quote, in relation to God. Oh well, science at the Oscars yay!

1: 57- Who the fuck is Charlie Laughton and was he high when he said that? You are your own friend when you find God? WHAT IS HAPPENING.

2:10- Why on earth would you choose to share the mental image of your dead father in his underwear eating pie with the general public? Why?!?!

2:40- OK he's thanking his family, this appears to be going in a semi-normal direction again. Awwww, cute family.

3:06- Whaaaaaat. Your hero is... future you? What if future Matt McConaughey turned out to be a homeless person with a drinking problem? How does this even make sense? All of a sudden all those rom-com characters he played throughout the years are making a little more sense.

3:29- IT IS NOT HUMILITY TO SAY YOU'LL NEVER ACHIEVE TRUE GREATNESS WHEN YOU JUST ADMITTED THAT YOU ARE YOUR OWN HERO. No. NO.

3: 32- Ooooooooh, so the person he's chasing is himself, but also his hero. Right that makes... incrementally more sense?

3:43- Aaaaaand Dazed and Confused quoting just happened. I tell ya, that's the great thing about Matthew McConaughey, he keeps getting older but stays the same amount of ridiculous.