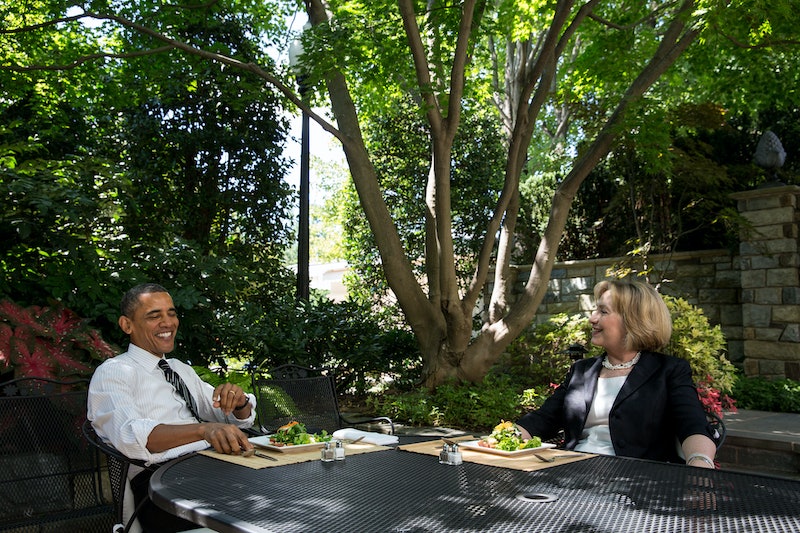 Tuesday marks the first joint appearance of President Barack Obama with Hillary Clinton on the campaign trail. They will appear together at a rally at the Charlotte Convention Center in North Carolina. Even now, eight years after their battle for the Democratic nomination, it can seem a little strange to see them campaigning together. Still, since their rally following the 2008 race (cloyingly held in Unity, New Hampshire), the two have had a pragmatic relationship. Obama is "chomping at the bit" to get out on the stump for Clinton, according to his former chief strategist, David Axelrod. And the presumptive Democratic presidential nominee is in dire need of her predecessor's support.

In many ways, the early stages of the 2016 Democratic primary looked a lot like 2008. Clinton entered the race with a mountain of support, only to be foiled by an unexpected adversary whom people just seemed to like more than her, even if he didn't seem "right" on paper. We even had parallel debate moments of Clinton needing to acknowledge how it felt to be thought of as unlikable and untrustworthy. Ultimately, Obama won the 2008 and 2012 elections on the strength of the "Obama coalition" — a wave of support from women, minorities, and millennials — and some believe that for her own electoral success, Clinton must recreate this cohesive support. Darrell West, director of governance studies at the Brookings Institute, told The Washington Times in May, "Clinton's biggest vulnerability is young people. Those individuals were vital to the Obama victory, yet they consistently have preferred Sanders over Clinton in the Democratic primaries. She needs to raise their enthusiasm level in order to keep them in the fold for the fall. If she cannot energize them, she will have a competitive race against Trump."

That is why Obama's presence on the campaign trail is so crucial now. He enjoys higher favorability ratings than either of 2016's presumptive presidential nominees, hovering at around 51 percent approval. Meanwhile, the Real Clear Politics average has Clinton at 39.7 percent favorability and Trump at 33.4 percent favorability. Moreover, results from a USA Today/Suffolk University poll reveal that nine out of 10 Clinton supporters and Trump supporters aren't going to budge — signaling more than ever that the November election will hinge less on who is more persuasive and more on which candidate can turn out the most voters.

Obama is a key part of that strategy. By her own admission, Clinton is not a "natural politician" unlike, arguably, Obama or her husband, former President Bill Clinton. If Obama can remind voters why they voted for him — and if he can lend Clinton some of his highly successful "fired up, ready to go" — that could translate into substantial numbers in voting booths.

Of course, Obama has an invested interest here as well. Aside from standard party loyalty, much of the legacy of his presidency depends on a Democrat winning the White House. The president's signature legislative achievement, the Affordable Care Act, stands to live or die depending on the next resident of 1600 Pennsylvania Avenue. And now that it's clear that the next President will be naming one (if not more) new Supreme Court Justice(s), maintaining the Obama legacy hinges more and more on what happens on Nov. 8.