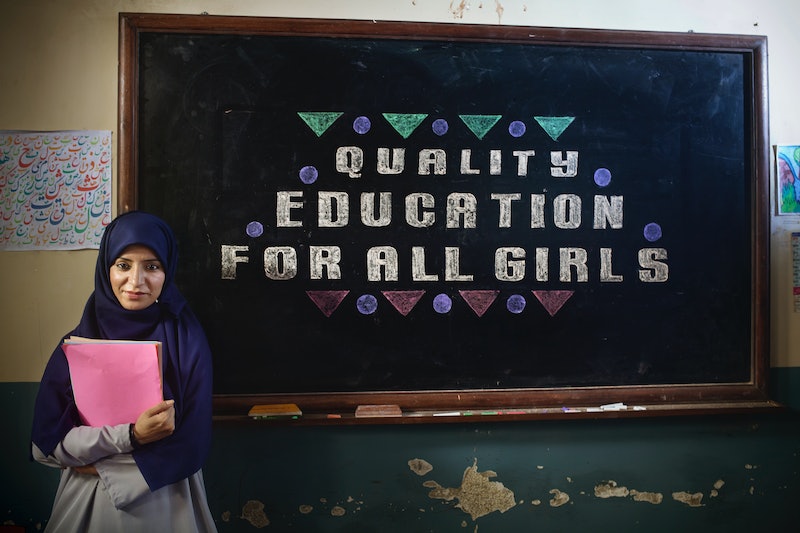 As a true child of the '90s, the Spice Girls' "Wannabe" was a huge part of my life. The song and the singers themselves showed me that young women can be powerful, flirty, and fierce, all in one. The video for "Wannabe" was also iconic, although the lyrics did leave me with some question marks (like, what on Earth does "You gotta get with my friends" really mean?) Regardless, I still viewed it as a girl power song, and now the Spice Girls' "Wannabe" has been re-imagined as an even more powerful feminist anthem with the help of the UN's Global Goals campaign to end poverty and tackle inequalities, with the #WhatIReallyReallyWant hashtag focusing on the input of women around the world on social media.

The mission of Global Goals and the hashtag is to encourage women to share what they wish to see for millions of women, including equal education, pay, and opportunity in all realms. The official site says that Global Goals vows to bring this message loud and clear to world leaders at the UN this September. To spread the word, the campaign released a short film that was shot in a style similar to the original "Wannabe" video, but this time, featuring artists and women from all over the globe lip syncing to the iconic lyrics of the song. And the result is powerful.

What moved me was that the video quite literally answers the question of what women "really, really want" by showing signs throughout the film with powerful stances like, "end violence against girls," "quality education for all girls," "end child marriage," and "equal pay for equal work," which are issues that we unfortunately are still grappling with today.

The video has already gotten support from two of the Spice Girls. Victoria Beckham tweeted, 20 years on - Girl Power being used to empower a new generation. So proud of @TheGlobalGoals #WhatIReallyReallyWant." And Melanie Chisholm, aka Sporty Spice, tweeted her support, too, writing, "Flattered and honoured that our crazy song is being used so beautifully." I agree, Mel.

The director of the film, MJ Delaney, also had some words as to why "Wannabe" was the perfect fit to support this important campaign, telling The Guardian,

"This is about modern day girl power. The Spice Girls were about a group of different women joining together and being stronger through that bond. These differences are what we want to celebrate in this film, while showing there are some universal things that all girls, everywhere, really, really want."

This is exactly what the film and campaign is about: bringing women of all backgrounds together for our common fight. The film's YouTube caption lists cameos by Bollywood actor Jacqueline Fernandez, British-Nigerian recording artist Seyi Shay, British hip-hop group M.O., dancer Taylor Hatala, and many, many more beautiful, vibrant, and inspiring girls.

For me, this is what "Wannabe" and the Spice Girls' girl power truly stood for. It is beautiful that exactly 20 years after the release of the original song, "Wannabe" is gaining a new life and meaning, which will guide a new generation of women — and that's what we should all really, really want.