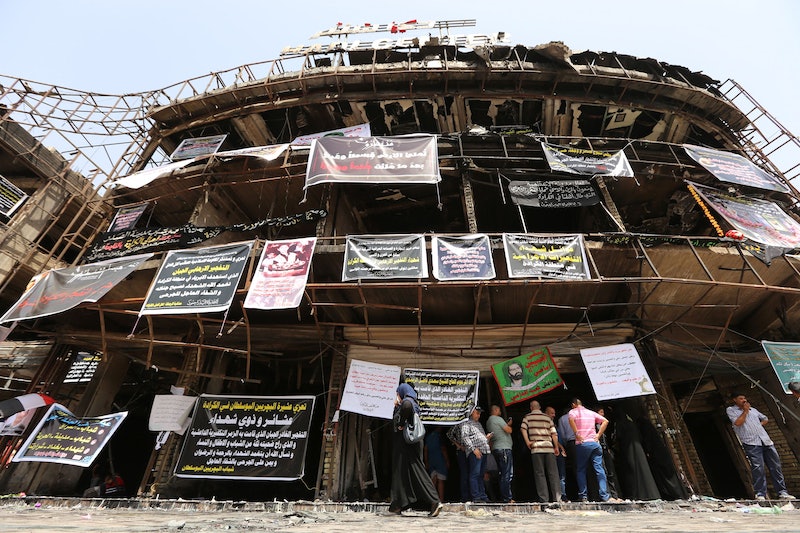 Tuesday evening marks the end of Ramadan. But it is also one week since the terrorist attacks in Istanbul, which killed 44. In the days since, more than 200 were killed at a Baghdad market and 23 at a Bangladeshi cafe. On Monday, suicide bombers attacked throughout Saudi Arabia, killing four outside one of Islam's most important religious sites, the Prophet's Mosque in Medina. All of this happened during the last week of Islam's holy month. Given that the suspects in these attacks are said to be from ISIS, an Islamist (albeit in name only) extremist group, why are terrorist attacks happening during Ramadan? It seems the exact opposite of what Muslims who recognize and celebrate the holiday would do.

For the vast majority of the world's 1.6 billion Muslims, Ramadan is a time of fasting, prayer, and being with friends and family. But there is actually a reason terrorists pick this time to attack. One of the beliefs about Ramadan holds that the rewards for good deeds or noble acts are greater when they are performed during this time. So if you believe that killing infidels is a noble act, you'll think that your spiritual reward will be greater if such killing happens during Ramadan. It's perverse logic, but this is how jihadist propagandists convince their followers to act.

For example, take ISIS. Abu Mohammed al-Adnani, Islamic State's spokesman, told followers to launch attacks in the West just before Ramadan began, in retaliation for strikes that have targeted their territory in Syria. "Know that in the heart of the lands of the Crusaders, there is no protection for that blood, and there is no presence of so-called civilians," he said. But why now? "So that perhaps you will gain the great reward for martyrdom in Ramadan." He went on to promise that that this year's holy month would be "with God's permission, a month of pain for infidels everywhere."

And it has been. The violence included attacks in Turkey, Bangladesh, and Saudi Arabia. But that's not all. There was a suicide bombing along the Syrian-Jordanian border which killed at least six of Jordan's security forces on June 21. Six more died in Lebanon in a Christian area near the border with Syria last Monday. One bomber targeted a house, and three more blew themselves up once rescue teams arrived on the scene.

In Yemen, also at the end of June, four suicide bombings on the same day killed 42 people at security checkpoints, one of whom was a child. Even more plots still were foiled, including two in Lebanon and one in Kuwait. On Monday, an attack in Malaysia resulted in no fatalities, but eight were injured in a nightclub while watching a European soccer match.

For many Muslims, the attack on Medina in particular was unthinkable. Hashtags #PrayForMadinah and #bombingattheholysiteofmedina trended on Twitter. Many pointed out that the attacks have proved that religion isn't what really fuels ISIS, and that the vast majority of those killed this Ramadan have been Muslims. Journalist Reem Al-Harmi wrote on Twitter, "Before blaming Muslims for ISIS, remember that ISIS terrorist attacks is targeting more Muslims than any other groups," tagging the post #ISISAttackingMuslims.

It even inspired a message of unity to Saudi Arabia from Iran — the two states are longtime rivals which officially sanction different sects of Islam. Iranian foreign minister Javad Zarif released a statement on Twitter: "There are no more red lines left for terrorists to cross. Sunnis, Shiites will both remain victims unless we stand united as one." Among the many leaders who echoed the sentiment were those of Qatar, Indonesia, and Turkey.