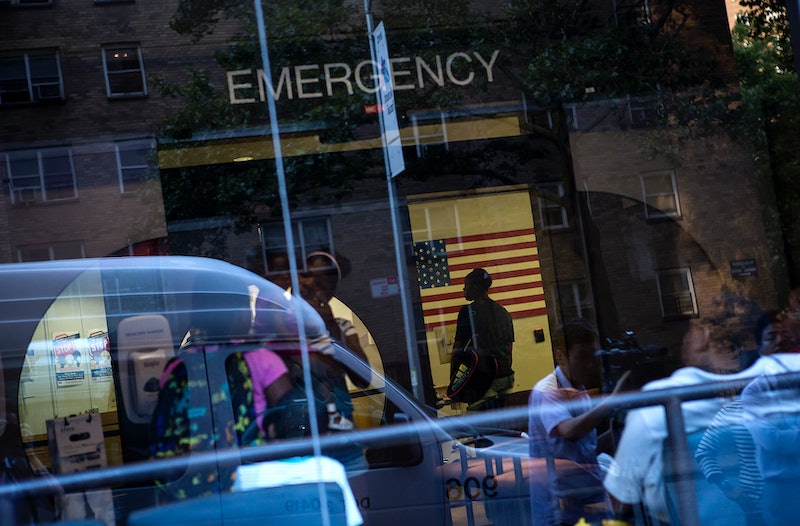 The ER is never, ever fun — and yet, the average American spends 28 minutes waiting in the ER before seeing a doctor. Oh, and that's not counting the 138 minutes spent in emergency rooms, on average, per visit. Now that the Agency for Healthcare Research and Quality has released new data about the top four reasons Americans rush to the ER, we can finally take more steps toward preventing ourselves from getting into health snafus.

Interestingly, every single region of the U.S. had the same top-four complaints bringing patients to the ER — however, in each different region, the number one spot was occupied by a different ailment. The data was released by region because not every state sent the AHRQ its ER data, so researchers were forced to present data by region rather than by state.

So here we have it: In no particular order, the top four reasons that Americans end up in the ER...

We're not too surprised by this one. At one point or another everyone will feel the brunt of stomach pains that make you end up on the toilet for hours. In fact, statistics show that between 1997 and 2008, opioid prescriptions for extreme abdominal pain doubled.

This is the most popular reason that people in the West head to the ER, and accounts for seven million visits a year. This is largely because belly pain can be caused by a number of different reasons, which range from superficial (bad takeout) to life-threatening (ruptured ectopic pregnancy,) or somewhere in between (intestinal cramping.)

OK, we're a little frightened by this one, not least by the fact it's the No. 1 ER ailment in the Midwest. Oh, and just FYI: we're near the peak of the respiratory virus season, and even antibiotics may not always help, especially in children.

One more reason to stay home from work in your PJs? (Kidding, kidding. OK, not kidding.)

In the South, this is the top ER ailment.

Incidentally, Jennifer Lawrence is from Kentucky...

East Coasters take the gold for making "superficial injury" the most common ER ailment in the region.

This can cover a range of things, but by definition, a superficial injury is one that doesn't require an emergency-room trip half the time. Time to toughen up, East Coasters.