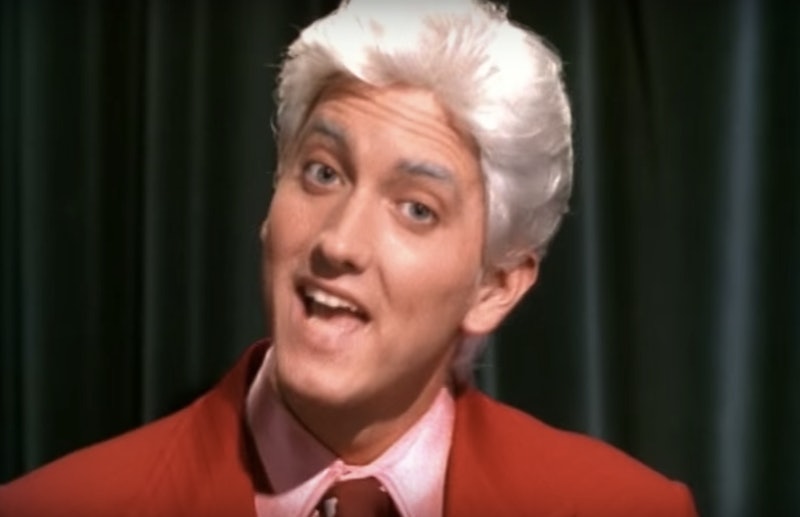 The '90s was a decade full of unforgettable music. From the breakout stars of the bubblegum pop scene to hip-hop's golden era, the music blasting on the radio at any given moment ranged from sing-along worthy to completely inappropriate when it came to family car rides. And, if you happened to be a kid in the '90s, that meant that your parents may have tried their best to guard your ears from a number of singles hitting the top charts. In fact, whether you realized it or not, there were numerous '90s songs you weren't allowed to listen to as a kid. Because, even if your parents' efforts failed, there were a ton of songs that were just too raunchy for your young ears.

To prevent you from being exposed to the more risqué songs of the '90s parents may have straight-up refused to buy you certain cassette tapes and CDs or, perhaps, they just subtly turned the radio dial when a spicier song came on. But, given the music that was being released during this time, their efforts may have been for good reason. In fact, when looking back at '90s classics now, the hidden meaning that went right over my head as a kid is now clearer than ever. And, well, let's just say that I'm happy my innocence was kept in tact for as long as it was... not that these artists didn't try their darndest to change that fact:

Just the title of this song alone gives away why you weren't allowed to listen to it on long car rides. Despite the song having more of a sensual flare than outright dirty lyrics, there was no way your parents were going to hear you sing along to it. And I'm pretty sure they didn't want to answer any questions about it either.

OK... this song played at all the birthday parties. However, I distinctly remember parents hoping us kids didn't quite catch on to the meaning of the lyrics. I certainly didn't pick up on lyrics like, "Woke up in New York City in a funky cheap hotel / She took my heart and she took my money," and "she must've slipped me a sleeping pill..." when I was younger.

Upon asking my mom about which songs she wouldn't let me listen to as a kid, her immediate reaction was, "Oh, Eminem!" Because, although there were clean versions of the rapper's music readily available on the radio, the explicit language-filled original cuts were simply not suited for my sister's and my young ears. Of course, now I can listen to all of the explicit Eminem I want. Sorry, Mom!

Salt-N-Pepa's music was great in the '90s if you were hitting up the clubs, but if you were still in grade school, then odds are you didn't have their cassette tape in your room. Between "Let's Talk About Sex" and "Push It" there was no avoiding the ongoing sexual theme.

This is yet another song with a pretty straight-forward theme. Naturally, it was immediately on the no-play list (along with the rest of most of Montell Jordan's songs, of course).

This song was every '90s parent's worst nightmare. It was completely inappropriate, but with the theme of a popular toy tacked onto it, it was nearly unavoidable. To my mother's dismay, I remember belting this song out in my room with a hairbrush. And, as expected, the meaning went right over my head.

Yep, "Bump N' Grind" is a '90s classic. But, I'm pretty sure you couldn't totally appreciate what a classic it was when the song first came out thanks to the boundaries set by your parents and their control over the radio. I mean, many of us probably weren't even close to sitting in the front seat of the car at this point in the '90s.

There's just no way our parents were ready to wield off sex questions at the time that this song was being played on every radio station.

Want a song that will make both you and your parents feel uncomfortable? Here it is. Adina Howard had basically no limits, with lyrics like, "'Cause I will be a freak until the day until the dawn/ And we can pump, pump all through the night 'til the early morn," you can cross that off your car ride playlist as well.

Since the meaning of this song may not have been as clear as the others, there's a chance that your parents let it slide by. However, being that it's a song about sleeping with multiple women, well, that made it a possible no-play. But, because I was so naive, I thought it was fun having my friend's names listed in the song.

Let's face it. Everyone listened to this song when it first came out. The only difference is that we used to actually think it was about genies. Our poor, poor parents.

This song is full of so many sexual innuendos that's it's hard to pick out just one lyric to share. There's no way I understood this as a kid. And I'm just happy I didn't quite figure it out until I got older.

But, alas, now all of this music is readily available for our throwback listening pleasure whenever we would like. Take that, Mom and Dad!

More like this
Now That 'Renaissance' Is Here, Let’s Revisit Beyoncé’s First Solo Album From 2003
By Grace Wehniainen
'Traumazine' Has Megan Thee Stallion Twitter Dancing Through Their Feelings
By Grace Wehniainen
Lauv Is No Stranger To Taylor Swift, Drake, Ed Sheeran, & Fame
By Alyssa Lapid
22 Movies On Netflix That Are Perfect For The Whole Family
By Bustle Editors
Get Even More From Bustle — Sign Up For The Newsletter