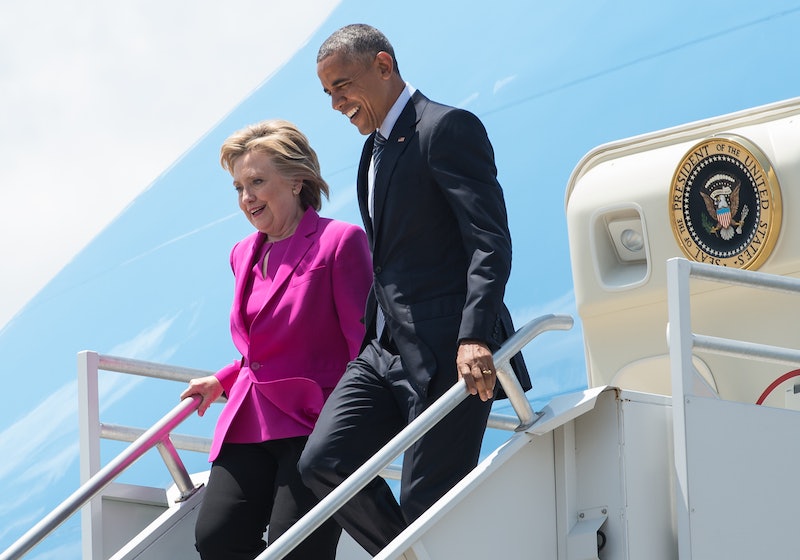 Presumptive Democratic presidential nominee Hillary Clinton had what must have been a tense and conflicted Tuesday. In the morning, FBI director James Comey finally announced the findings of his agency's investigation into Clinton's use of a private email server while serving as Secretary of State, and while he stressed that he believed an indictment was inappropriate, she'll still likely pay a political price for his criticism of her actions. But in the afternoon, she got an enormous boost. President Obama hit the campaign trail for Hillary Clinton, making his debut as her highest-profile supporter.

It was basically always a foregone conclusion that Obama would play this kind of role for Clinton. He's a notoriously great campaigner, and he knows how to fire up a crowd. But this is actually pretty rare for modern American politics — largely because outgoing two-term presidents haven't been popular enough for their party's nominee to want their help. John McCain, needless to say, didn't ask George W. Bush to campaign for him. Al Gore didn't ask Bill Clinton, although Clinton's approval ratings suggested that was the wrong choice. Ronald Reagan didn't do it for George H.W. Bush, either.

In fact, as NPR's Domenico Montanaro noted on Tuesday, this is the first time in at least a century that an outgoing two-term president has campaigned for their successor this way. And as you can see in the video below, Obama is giving it his all.

If you'd tried to imagine Obama leading a "Hillary" chant back in the days of their ferocious rivalry during the 2008 Democratic primaries, it might've been tough. But now, all these years later, here we are, with the presumptive Democratic nominee getting a big boost from a popular outgoing incumbent. Regardless of your opinion about them as politicians, it's pretty hard to deny that Obama knows how to belt out a rallying cry.

The key to Obama and Clinton's tight political proximity throughout the campaign, needless to say, is the former's approval rating, which has been very positive in recent months. In fact, this week he hit his highest approval rating since 2011, in the aftermath of the killing of Osama bin Laden. In other words, his popularity is on the upswing at the perfect time for Clinton's purposes, and she's repaying the favor by running strongly with his record, regularly talking about the need to protect and preserve his presidential legacy.

It also can't be overlooked just how seriously Obama takes the threat of a Trump presidency, and that's got be part of what's fueling his impassioned advocacy for Clinton's candidacy. Obama has commented before that he believes America works best when both parties can operate from a place of moderation and good faith, and Trump as a political personality is the precise opposite of those qualities. However you look at it, though, the upshot is very clear: Tuesday was just the first Clinton/Obama event of many to come, and that might be something Trump needs to worry about.