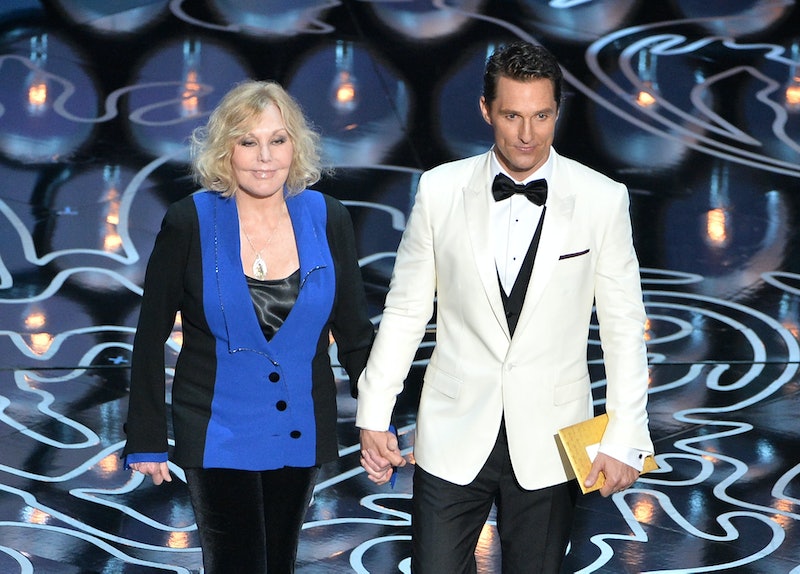 Among the many esteemed presenters at last night's 86th Annual Academy Awards was Kim Novak, the 81-year legend who was the star of Hitchcock's Vertigo. Novak appeared onstage alongside Matthew McConaughey to present the award for Best Animated Feature. As McConaughey gently guided Novak forward to the microphone, Twitter exploded and the reactions were spiteful and cruel dissections of Novak's appearance and her "botched" plastic surgery. Many went the crass route of making "her face is Frozen" jokes to ribbing that McConaughey should use his True Detective skills to figure out what happened to her face. Unsurprisingly, even the abhorrent Donald Trump chimed in, tweeting: "Kim Novak should sue her plastic surgeon!"

So if we're going to entertain the gross commentary from the peanut gallery, what DID happen to Novak's face? You could chalk it up to a "bad plastic surgery job," but what really happened was the pressures of Hollywood, an industry that both encourages women to perfect themselves to unrealistic degrees (often through cosmetic enhancement like plastic surgery) and also scrutinizes every inch of female stars' appearance. It's symptomatic of a Hollywood culture that not only demands eternal youth in women but simultaneously lauds the "grace" with which male actors in Hollywood age. While we applaud the silver screen's silver foxes, women like Novak are called upon to appear in public where they know they will be criticized for no longer being young and beautiful, where they will be the butt of the joke, "What happened?"

Self Styled Siren wrote a sobering piece on her blog about the unfailing criticism that Kim Novak, born Marilyn Novak, received her whole life. Novak was subject to what are now almost clichéd double binds of Hollywood: there was an image of a sex symbol that she was forced to project, for which she was called "too heavy," and any departure from it was shot down, as well. Siren wonders how Novak must have felt even going into the ceremony last night:

So let’s say — just as a hypothetical for-instance — you are an 81-year-old star whose last movie was in 1991 and who hasn’t been to the Oscars in many a long year. Not that you were ever nominated for one in the first place; you were, after all, a sex symbol for most of your career. As the evening approaches, the anxiety sets in. Harsh lights, you think. High-definition cameras. And a public that remembers you chiefly as the ice goddess whose beauty once drove James Stewart to the brink of madness.

With so many branded "selfies" of celebrities on Sunday night, this passage paints a a harsh contrast to the atmosphere of young, beautiful, and fresh Hollywood that the Oscars tried to emulate. Celebrities, they're just like us, was the message last night, but the farce disintegrated a bit in the face of Kim Novak. Not everyone in Hollywood is friendly and loving; where are Novak's defenders? Aside from Rose McGowan, who called the audience "self-obsessed" for not giving Novak a standing ovation. She did not, though, speak to the cruel criticism of Novak's appearance.

Kim Novak will probably never again attend the Academy Awards, and in a way, isn't that what Hollywood does to its older female leads? As fun of an image that the Oscars tried to veil itself in last night, it's clear that the film world is still an exhausting place for women, who are called onto the stage just to be booed.