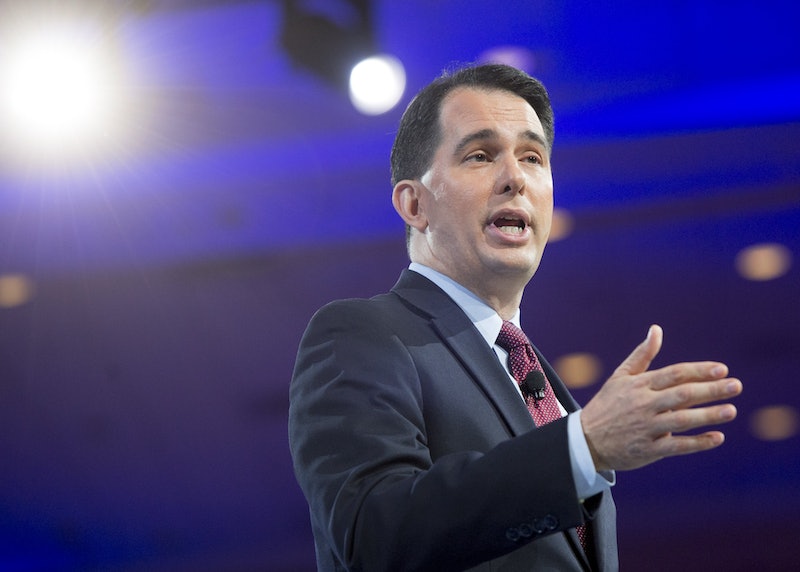 Well, Scott Walker just caved and tweeted the lamest, most pathetic, tail-between-his-legs show of support (if you can call it that) for Donald Trump. The tweet came after the Wisconsin governor announced on Tuesday in an interview that he will speak at the Republican National Convention, where Trump is set to become the official presidential nominee of the Republican party.

Theoretically, this should be a big get for Trump. Walker has continued to gain support from the Republican base after making his mark by taking some strong stances against unions, collective bargaining rights and right to work laws. He also survived a recall election against his pro-union opposition in 2012. Unfortunately, what would normally be a big bang for the presumptive Republican nominee ended up being barely audible as Walker couldn't even use the candidate's name in his so-called endorsement.

As he promised during the Republican presidential candidate debates when he himself was in the ring, Walker is standing behind the presumptive nominee, no matter what, in the name of the party. While, politicians are usually lining up to speak at conventions — in no small part because they've launched many relative newbies into the spotlight, from Ann Richards to Barack Obama, it looks like Walker might be trying to keep his distance. The headline of Chris Cillizza's article in the Washington Post may have said it best: "Scott Walker endorsed a male human for president today."

Walker's support comes as a bit of a surprise, considering the two campaigned hard against each other during the primary. The animosity between the two really started to heat up when Walker's original endorsement after dropping out of the race himself went to Sen. Ted Cruz — whereafter Trump flew his sore-loser flag claiming Walker could never endorse him anyway because he was so badly beaten by Trump in the primaries.

With a similar level of enthusiasm as his recent tweet, Walker told USA TODAY NETWORK-Wisconsin in June, "Just saying that I'll support him over Hillary Clinton doesn't mean I embrace all the things that he says or all the ways that he says it."

It makes sense that Walker isn't shouting his plans to speak at the convention from the rafters since the Republican National Committee is scrambling for a D-list line-up of speakers and celebs. But Walker is a man of his word, and he will be there backing Trump. That, or he's just a guy who couldn't come up with as good of an excuse for not going as Arizona Sen. Jeff Flake did: "No. I've got to mow my lawn."