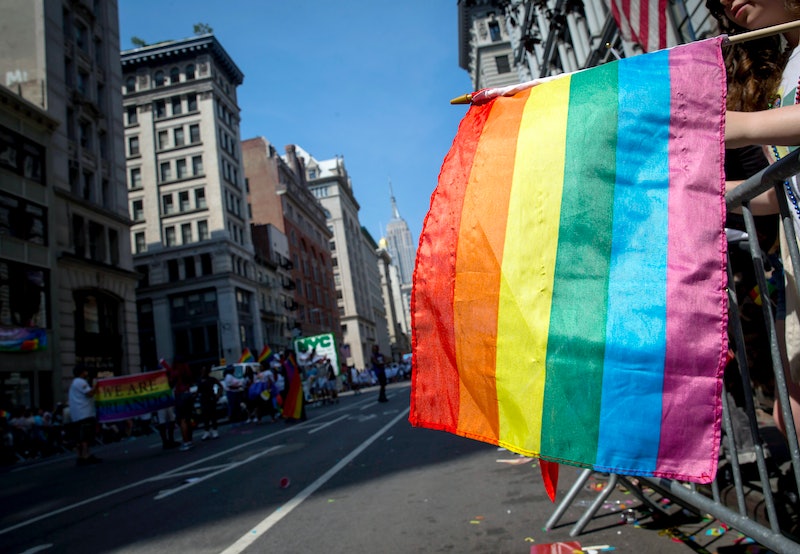 Between concentrated anti-trans legislation nationwide and the Orlando shooting last month, 2016 has been a difficult year for LGBTQ people. You don't even have to identify as LGBTQ yourself to recognize the issues facing the community today. So when straight people stick up for their LGBTQ friends and family — well, that's enough to make even a Grinch like myself smile. That being said, in my experience as someone who identifies as bisexual, I've found that there are certain rules for cisgender, straight people to know before they start fighting for LGBTQ rights — or rather, some guidelines to consider before you wind up in the middle of a very long, awkward silence because you didn't realize trans people can also be gay.

Although the sheer variety of terms and labels used today can be daunting, supporting LGBTQ people isn't necessarily about memorizing the definitions of each and every identity; there's no pop quiz you have to pass before you can call yourself an ally. Rather, it's more about giving LGBTQ people the space to speak for themselves. For instance, most allies will automatically cringe at the thought of Heterosexual Pride Day — not because straight people aren't great, but because it cheapens the history of LGBTQ Pride and the issues still facing the community today. Besides, complaining about how there's no Hetereosexual Pride Day makes people sound super whiny. (Spoiler: There actually is a Heterosexual Pride Day. Generally, we just call it "history" — which is exactly why LGBTQ Pride celebrations are needed.)

All jokes aside, there are certain things for cisgender, straight people to keep in mind when they're fighting for LGBTQ rights. Let's look at seven below.

1. Learn About The Community

Step number one to fighting for LGBTQ rights is knowing what being LGBTQ entails – the terms, the history, and the issues facing the community today. Although no single list can encompass all the terms used to describe sexuality and gender identity, the Human Rights Campaign has an extensive list; that's a good place to start (and don't be afraid to ask people you know in real life, too). Additionally, LGBTQ history extends back thousands of years, but here are a couple of major events and issues worth knowing about to get you started: The pink triangles used to mark homosexual men in Nazi Germany, the Stonewall Riots, modern LGBTQ homelessness, and the state of mental health in the LGBTQ community today.

Again, you don’t need to have a doctorate in sexuality studies to lend your support, but you should make an effort to learn about the community, especially as it stands today. At the very least, it’ll keep you from sticking your foot in your mouth, and it can inform where your help is most needed.

This just in: LGBTQ rights are about… LGBTQ rights. Who knew, right? It’s not that there isn’t room for cis, straight people in the fight for LGBTQ rights — allies are instrumental in spreading acceptance, and on a more personal level, there’s nothing more lovely than seeing people defend a community just because it’s the right thing to do. However, straight, cis people simply don’t face the cultural and systemic oppression that LGBTQ people do. It might be tempting to interject with your own experiences or try to speak for your LGBTQ friends, but quell the urge and let LGBTQ people speak for themselves.

3. Put Your Ears To Work

Once you’ve stepped back, make sure to actually listen to what LGBTQ people are saying. Cisgender, straight people are afforded advantages they might not even realize, so don’t discount something just because you haven’t experienced it.

In that vein, you’re going to hear some spectacularly awful things that have been said or done to LGBTQ people. Follow the ever–important Rule Number Two up there and don’t make it about yourself by asserting your own progressiveness. You’re already doing something to help the LGBTQ community simply by listening.

If someone tells you to use certain pronouns, use them. It’s not hard. If you’re in doubt about how to refer to someone, just ask them — it’s not as awkward as you might anticipate. And if you slip up, apologize, correct yourself, move on, and ideally don't make the same mistake again.

Please, for the love of all that is glittery and rainbow in the world, stop proposing unwanted threesomes to bisexual people. If it’s going to happen, they’ll probably come to you.

7. Chill Out A Little

Finally, keep in mind that everyone makes mistakes. If you slip up and use the wrong pronouns, or you find yourself trying to direct a conversation about LGBTQ issues, it’s not the end of the world. The important part is to chill out a little and do your best.