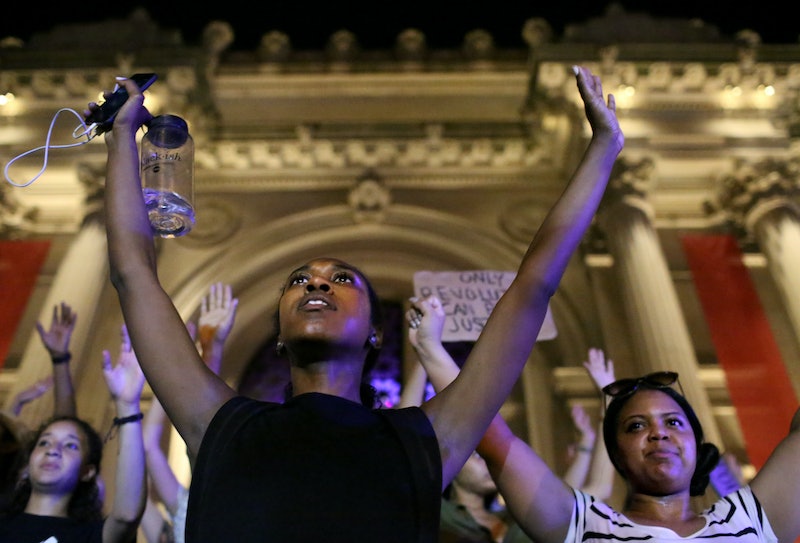 This is a time when so many emotions can leave many in America, particularly Blacks, at a loss of what to say. The recent murders of Alton Sterling and Philando Castile have created more distress, but the event also call for more action.

Last year brought us the New York Times best-seller, National Book Award-winning, and Pulitzer finalist Between the World And Meby Ta-Nehisi Coates as well as the Coretta Scott King-honored and We Need Diverse Books' The Walter-winning book All-American Boys by Jason Reynolds and Brendan Kiely. This year has also brought us a number of powerful nonfiction works that speak to the Black Lives Matter movement and struggle for civil rights.

Here are five nonfiction titles that came out or are due out this year that encapsulate Black voices, explore the politics of race, and relay the experiences of the Black community. Hopefully, these books can help bring a nation together, rather than divide it.

1. The Fire This Time: A New Generation Speaks About Race edited by Jesmyn Ward

National Book Award-winning author Jesmyn Ward edited and contributed to this new anthology of essays from contemporary writers of color. The anthology uses James Baldwin's The Fire Next Time as a jumping off point, and the it includes historical research, personal essays, poems, and letters of hope for the nation and those due to inherit it. This collection encapsulates what it is to be Black in America from voices like Kiese Laymon, Claudia Rankine, Courttia Newland, and Edwidge Danticat, to name a few.

2. Nobody: Casualties of America's War on the Vulnerable, from Ferguson to Flint and Beyond by Marc Lamont Hill

Marc Lamont Hill has been a contributor to BET News and CNN, and he's the host of Our World with Black Enterprise. He focuses on bringing attention to Black life in a way that differentiates us from caricatures and celebrate our successes. In Dr. Hill's new book, he delves into the reasons for the continued schism in perception of Blacks in America — everything from socioeconomic disparity to federal and local policies that can depress a culture steadily over time.

3. Freedom Is a Constant Struggle: Ferguson, Palestine, and the Foundations of a Movement by Angela Y. Davis

The title says it all. Angela Davis' involvement in the pursuit for civil rights, notably in the Black Freedom Movement, made her a target of the FBI. In this assembly of Davis' speeches and other writings the activist and educator discusses many core truths along with intersections of race and feminism and perceived patriotism, laying the foundation for future activists, as well as the ongoing fight to get to a place of equality and equity.

4. From #BlackLivesMatter to Black Liberation by Keeanga-Yamahtta Taylor

Keeanga-Yamahtta Taylor is a professor of African American Studies at Princeton University, and her research often delves into the correlations between race and public policy. In her latest book, she analyzes the current resistance and how this may encourage indelible change in not only the mindset of America but in the ways we make our voices heard.

If you've read Mychal Denzel Smith's work on The Nation, you know that he doesn't aim to placate anybody when discussing race and racism in America. In his memoir, he speaks to how he became "woke" on larger political and social issues, tying his education into a broader understanding of the string of unnecessary deaths of Blacks while also celebrating Black Joy and milestones.