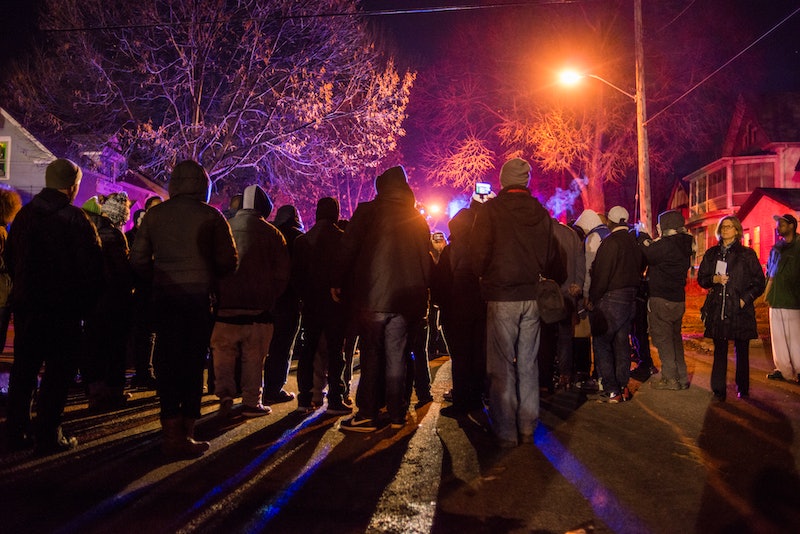 In less than 24 hours after police fatally shot Alton Sterling in Baton Rouge, Louisiana, Philando Castile was shot and killed by a police officer in Falcon Heights, Minnesota. Lavish Reynolds, Castile's girlfriends, shared a video to Facebook showing the aftermath of the shooting that took place on Wednesday evening. The video has since been removed from Facebook, likely due to its graphic nature, as it showed Castile violently bleeding through his white t-shirt as a police officer stood by. While it is extremely difficult to watch the video of Castile bleeding to death, the transcript of Castile's shooting video reveals the disturbing way the Minnesota police officer handled this horrific situation.

Castile was only 32 years old when an officer opened fire on him as he sat inside his car. His girlfriend sat next to him and, presumably, his girlfriend's child sat in the back seat of the car while the officer shot Castile four times in the arm. Castile had been putting his hands back up in the after after retrieving his ID and registration — which the officer had asked for — just before the officer started shooting.

Immediately after shots were fired, Reynolds captured the aftermath of the situation by broadcasting a Facebook Live video to her account.

Read the entire transcript of the video here:

Reynolds: Stay with me. We got pulled over for a busted tail light in the back and he’s covered … they killed my boyfriend. He’s licensed to carry. He was trying to get out his ID and his wallet out his pocket and he let the officer know that he had a firearm and he was reaching for his wallet and the officer just shot him in his arm.

Officer: Ma’am, keep your hands where they are.

Reynolds: I am sir, no worries.

Reynolds: He just got his arm shot off. We got pulled over on Larpenteur.

Officer: I told him not to reach for it! I told him to get his head up!

Reynolds: He had, you told him to get his ID, sir, his driver’s license. Please don’t tell me he’s dead.

Reynolds: Please don’t tell me my boyfriend just went like that.

Officer: Keep your hands where they are.

Other Officer: Get the female passenger out of the car.

Reynolds: I got … the Roseville Police got me handcuffed, my phone is about to die. I’m on Larpenteur and Fry and the Roseville Police Department just shot my boyfriend. They shot him four times. He has a license to carry. We had a busted tail light. And we had some weed in the car that’s about it.

The 10-minute video was originally posted on Reynolds' Facebook, but it has since been removed.

More like this
Here’s Where The NHS Nurses’ Strike Currently Stands
By Sophie McEvoy
A New Netflix Doc Will Explore The Unsolved Murder Of Jill Dando
By Sam Ramsden
This First Look At 'The Gold' Shows Jack Lowden In A Whole New Light
By El Hunt and Sam Ramsden
A Teen Murder Victim's Horrific Diary Entry Helped Police Find Her Killer
By Brad Witter
Get Even More From Bustle — Sign Up For The Newsletter
From hair trends to relationship advice, our daily newsletter has everything you need to sound like a person who’s on TikTok, even if you aren’t.