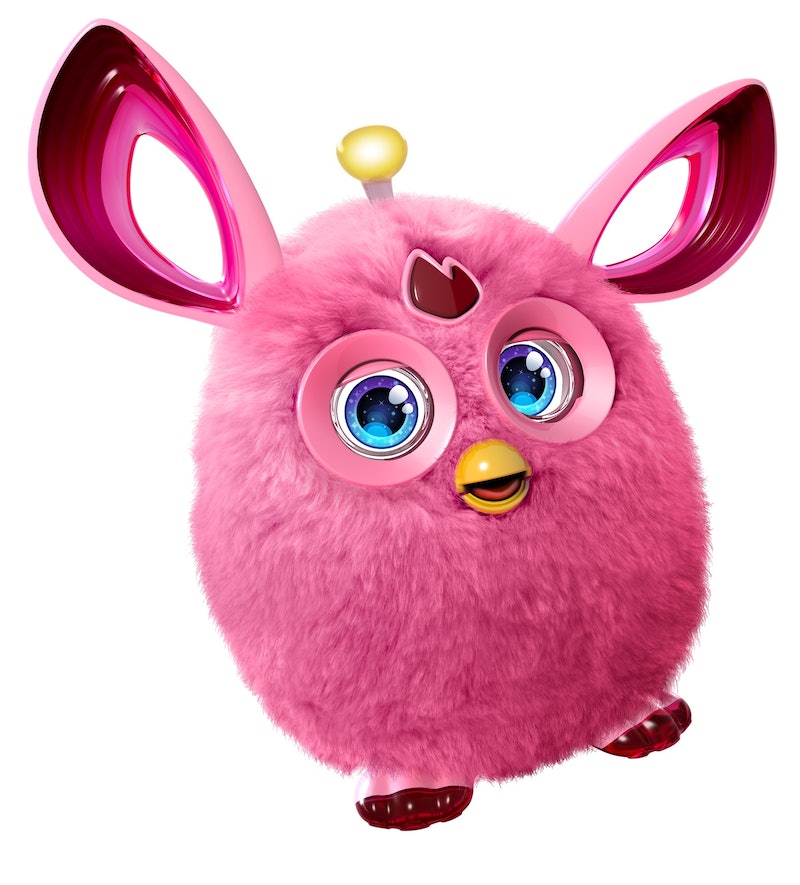 Exciting news for anyone hungry for a little ‘90s nostalgia — our favorite adorable toy is back with an awesome new makeover. Furby Connect is the latest reboot of the hamster-owl-alien hybrid that we all knew and loved (or were terrified of) growing up. What makes this Furby different than the one that stood on your nightstand in 1998? The people at Mashable tested out the latest model, which is coming to stores this fall, to give us an exciting sneak preview of all Furby's new tricks.

The Furby Connect is truly a toy for the digital age. Its updated look includes large articulate ears and darting LCD screen eyes that make this Furby far more expressive. The round, colorful eyes have more than 150 animated expressions, to let you know exactly what your Furby wants and "feels." The large ears move up and down with its emotions as well, and have a more mouse-like quality to them than the fuzzy bat ears of its '90s counterpart.

This Furby uses Bluetooth LE connectivity to interact with other nearby Furby Connects, as well as a host of fun videos, songs, and games for electronic devices such as tablets and smartphones. An LED antenna on the top of its head can even be used as a joystick.

By using the new Furby app, you can virtually feed Furby, raise Furby babies (called "Furblings"), and even make it go to the bathroom or lay eggs. Sensors placed throughout its body react to sound and touch, so it is aware of its environment and can play along. The new improved Furby has a large vocabulary of 1,000 phrases, but still speaks in "Furbish," the language of its home planet. All of these new touches encourage kids (or me) to interact and build relationships (some unhealthily close — like mine) with our Furbies.

Hasbro has even solved the problem of Furby suddenly turning on in the middle of the night that plagued our childhood. With the new addition of a sleep eye mask accessory, which adds to the cuteness, the problem of your Furby staring at you creepily as you try to drift off to sleep is solved. The eye mask silences your Furby and turns off its connectivity until it's removed, so it will not chatter at you incessantly until you break down and remove its batteries.

This year the Furby will be turning 18-years-old, and though I have fond memories of the first-wave toy (mine was leopard print), I have to admit that this is possibly the best version yet. Furby still has the power to impress and surprise, and hasn't lost its eccentric appeal.

Furby Connect can currently be pre-ordered on Amazon in either pink or teal (blue and purple options are on the way as well). It requires AA batteries, which will give you six hours of continuous usage, and retails for $99.99.

In some circles I may be considered an adult, but me wanty.