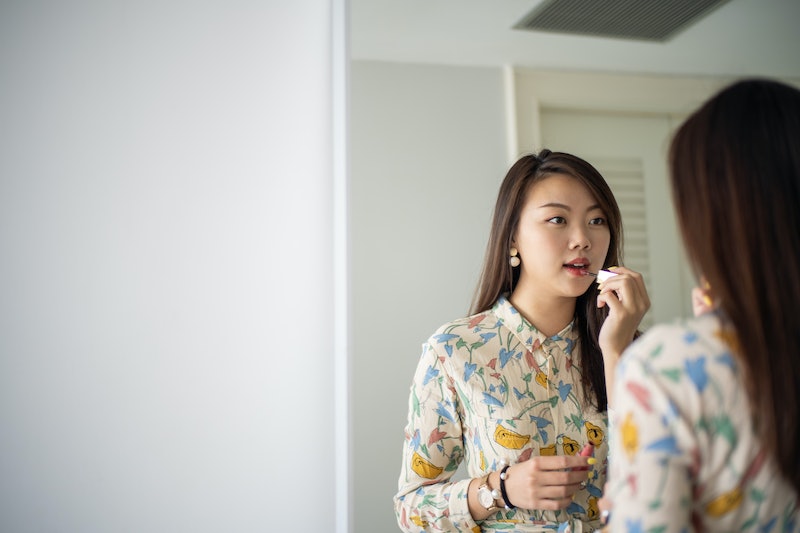 As many will understand, being told to "stay calm" or "chill out" when you're suffering from anxiety doesn't actually help. One approach which advocates just the opposite, though, could fare better for some of us — or at least, that's the thinking behind this trick for coping with anxiety, which has just been put to the test. And although getting excited about anxiety doesn't sound like something that's likely to come easily, it might be a useful strategy for helping to keep your anxiety in check.

This trick, a cognitive anxiety coping technique known as "anxiety reappraisal," suggests that telling yourself you're excited whenever you feel nervous is the key to overcoming a particularly scary bout of anxiety. Harvard Businss School professor Alison Wood Brooks has written extensively about the technique; research she published in 2014 explored it, and although it might sound a bit reductive at first, the science behind it is actually pretty interesting.

In her research (published in the Journal of Experimental Psychology), Brooks notes that anxiety and excitement are both pretty much the same in that we experience both as arousal: In both cases, yur heart rate increases and more cortisol (the "stress" hormone that's secreted by your adrenal glands, in your kidneys) pumps through your body. The only real difference between the two, says Brooks, is your mindset. In fact, she says that it's actually much easier to convince yourself to get excited than try and stay calm when you’re anxious; calmness doesn't fight fear, after all.

Brooks' study involved surprising a bunch of participants with nerve-inducing tasks such as maths tests, two-minute speeches, and karaoke performances in front of a group. (She chose "Don't Stop Believin'" for its popularity and the fact it can be performed in three different octaves). Some participants were told to say "I am anxious" before performing the tasks and asked to remain calm, whereas another group were told to embrace the fear and recite "I am excited."

According to The Atlantic, the “excited” participants out-performed the other group: A computerized measurement of volume and pitch revealed the participants peformed Journey's song better, that they gave more confident, persuasive speeches, and did better on the math tests. They were still anxious, but overall, they performed the tasks better.

So: The question then becomes, does it work in the real world? Olga Khazan, a staff writer for The Atlantic, decided to try out the results for herself by repeating a task from Brook's experiment in a short video posted to the site. “What you're really doing is getting yourself out of a threat mindset where you're focused on all the things that could go wrong, and into an opportunity mindset where you're thinking about all the good things that will happen if you do well," Khazan said before she did karaoke with Brooks' prep technique. And afterwards? "It was good... the excitement helped," she concluded.

Of course, it's possible that the "I am excited" technique might not work for everyone; for one thing, Brooks' experiments were conducted in group situations where support and encouragement from others might have helped bolster the participants' confidence, and for another, the level of anxiety experienced might make the technique either more or less effective.

But despite these limitations, the research might still be a beacon of hope to anyone suffering from anxiety — and the best thing is, anyone can try it out for free on themselves the next time they feel on edge. There's no one-size-fits-all solution for treating anxiety, but having an extra tool in your tool kit certainly can't hurt.