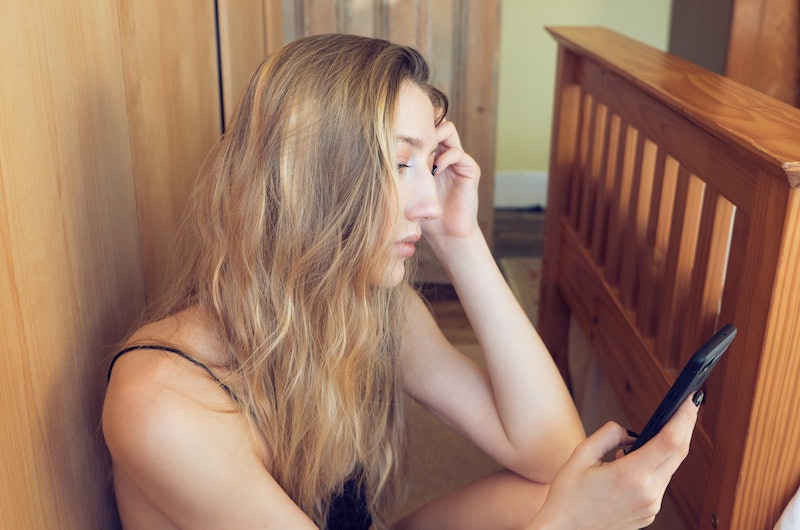 There isn't a single aspect of life that anxiety disorders don't affect, even if it's in the most subtle of ways. When it comes to the things that take up most of our time every day, like work and personal relationships, we sometimes feel like we stand no chance against anxiety. And though we may not always realize it, social media plays a huge role in our daily life, and it's certainly something that influences our mental health as well.

Crowdtap, a social marketing platform, conducted research finding that people between the ages of 18 and 36 spend almost 18 hours a day using different types of media. More specifically, we spend more three hours a day just on our mobile phones, texting, video chatting, and browsing the web. It seems our lives can basically be divided up into sleeping, eating, and Facebooking. OK, maybe that's an exaggeration — but still, that's a hell of a lot of time to be staring at a screen.

It doesn't come as a surprise, then, that people with anxiety disorders react so strongly to social media. Bustle spoke with Jodi Aman, a psychotherapist with more than two decades of experience and author of You 1 Anxiety 0, who says folks with anxiety should keep an eye out for the detrimental effects of social media. "If what you are seeing upsets you or makes you feel bad about yourself, it's time to step away for a little while," Aman says.

Here are seven negative impacts that social media can have on people with anxiety.

1. It Makes You Compare Yourself To Others

When you hop on your laptop on a Sunday morning and see all the fun, upbeat things people have been up to, you suddenly feel crappy about your low-key night in. "Social media has people comparing themselves," Aman tells Bustle. As soon as we fall into that trap, our anxiety levels shoot up and we suddenly feel wildly insecure about our lifestyle.

It's important to remember that everyone on social media intentionally puts forward the best version of themselves, so what you see isn't necessarily the whole picture. Don't let yourself get worried that your life is a complete bore while your friend's is impossibly spontaneous.

2. It Makes You Feel Like You're Not Accomplishing Enough

People tend to overshare on social media, especially when it comes to their achievements. They love to announce their latest job promotion or engagement (although, I hardly think that counts as an accomplishment). Quite frankly, it gets a little bit annoying. It's also potentially harmful to people with anxiety, since the very nature of anxiety gathers information like this and runs wild with it, convincing you that there are so many things you're failing at in your life.

If you feel like you've been spending too much time on your friends' profiles, Aman recommends you take a break and "build confidence doing something else before going back." You have a lot going for you and it doesn't help you at all to feel sorry for yourself just because someone you vaguely know online just landed a book deal.

3. It Makes You Feel As If You Have Poor Social Skills

As someone with anxiety, one of the things that plagues me when I'm on Twitter is how socially adept all of these people are at communicating with each other. They're all so witty and friendly, yet I'm over here tiring myself out just trying to deconstruct what it means when someone I respect "likes" one of my tweets. Let me tell you: it's exhausting.

This is a pretty common narrative of someone with anxiety. All the interactions that go down on social media accounts can be take a toll on you after a while. Keep your time online to a minimum and try not to liken yourself and your social skills to anyone else's. There's nobody you have to keep up with.

4. You Don't Believe In Yourself As Much

When people start to compare themselves to what they see on social media, Aman says, "It undermines their trust in themselves." We get so caught up in what other people appear like online that it sends us into a cloud of doubt about who we are and what we're passionate about. We second guess all the things about ourselves we once knew to be true. Any normal person would call it jealousy or insecurity, but it's much more burdensome to someone with anxiety. It eats away at us for days, until much of our self-confidence has left the building.

5. It Can Make Your Struggles With Body Image Worsen

There is a strong correlation between anxiety, depression, and negative body image. It's not uncommon for anxious adults to also worry incessantly about what their body looks like or whether they're "thin" enough to be accepted by society. You only exacerbate these insecurities by constantly flipping through pictures of pretty people on social media who have probably used some kind of filter to put forth the absolute best image of themselves.

If you spend too much time glued to Instagram (especially celebrity Instagrams, which are chock full of photoshop), you're likely to become anxious. Aman says this can make "people feel 'less than,'" which is never a good thing. So try not to stare at other people's bodies so much, especially if it's going to make you harshly judge yourself.

6. It Makes You Spend Less Time With People Who Actually Care About You

You may think you're more in touch with the world around you by being highly active on social media, but the opposite is actually true. Studies have shown that the more people use Facebook, the more likely they are to feel unhappy and lonely. Psychologists are actually concerned that it's making us less sociable in real life, and less likely to spend time with friends and family we know and love.

This is especially a problem for people with an anxiety disorder, who already have trouble putting ourselves out there in social situations. Being alone at home, wrapped up in a warm blanket with nobody to poke around in our business, sounds infinitely better. But constantly isolating ourselves isn't healthy either, and that's precisely what all that time on social media makes us feel like doing.

7. You Focus Less On Yourself And Your Needs

If you really think about it, you probably spend most of your time on other people's profiles when you're mucking around on social media platforms. That means you're devoting a lot of your time and effort to their interests, their hobbies, and their lives in general — and leaving yourself neglected.

People with anxiety need all the self care they can get, so shut your laptop, leave the house, and do things you know will help you feel better.