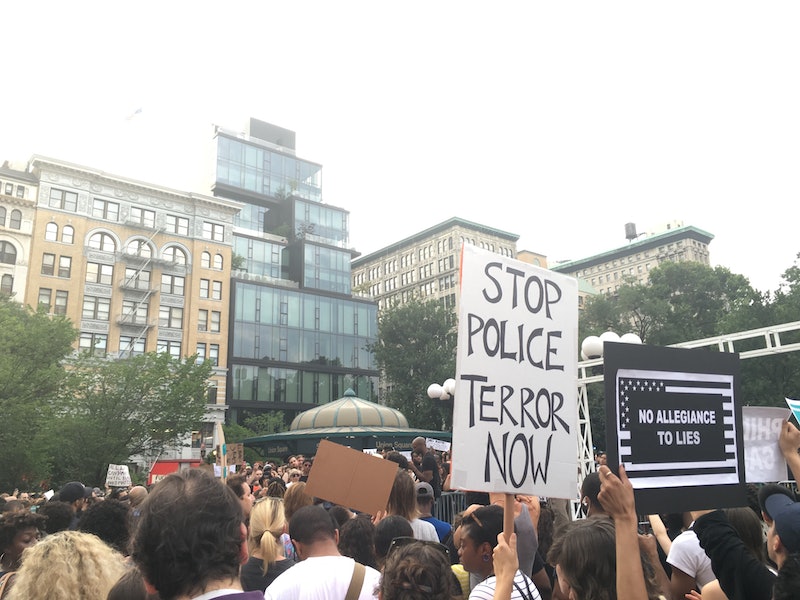 In the past 48 hours, Americans have witnessed two shocking, senseless losses of black lives at the hands of police. On Thursday, protesters in Union Square honored Alton Sterling and Philando Castile, two black men who were killed by white police officers in appalling examples of racist police brutality.

The details of the separate cases aren't for the faint of heart: Sterling was killed by police early Tuesday morning, and bystander video footage seems to show that although he had a gun in his pocket, he did not reach for it, and the officers removed the gun after they shot him while pinned to the ground. The officers involved suggested afterward that they believed the shooting was justified after an apparent altercation. Castile was killed at a traffic stop when officers stopped him, along with his girlfriend and her young daughter, for a broken taillight. He informed them that he had a concealed-carry permit and was reaching for his wallet to give them his license, and according to his girlfriend, Lavish Reynolds, when he did so, an officer shot him. The interim police chief has said they are investigating the case, and the officer has been placed on administrative leave.

The palpable grief, outrage, and pain of black people has surfaced on social media and protests in streets of Philadelphia, Baton Rouge (where Sterling was from), Oakland, and now New York. Below are some photos and videos from the protests.

The well-attended protest was broadcast by many social media users, including the former Daily Show correspondent Jessica Williams.

Police eventually reportedly began arresting protesters around 8 p.m. and cordoning them off in a city bus.

As news of yet another black death makes waves on social media, more protests in honor of the victims and in defense of the black community against police brutality can be expected. May the protesters stay safe and have their voices heard, and may we finally begin changing our country for the better.