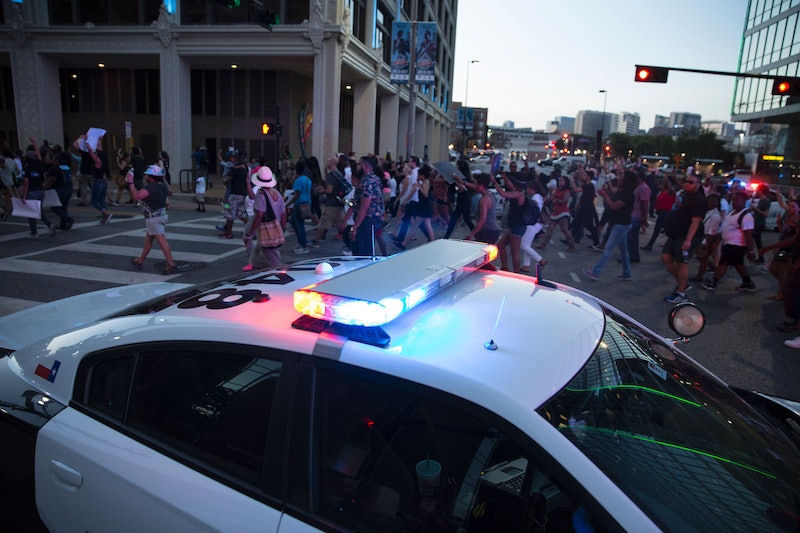 On Thursday night at a Dallas, Texas, protest over the deaths of Alton Sterling and Philando Castile at the hands of law enforcement, snipers reportedly shot several police officers, killing at least four and injuring even more, the Dallas Police Chief said in a statement. The Dallas police officers who died in the devastating shooting have not yet been identified. According to The Dallas Morning News, a Dallas Area Rapid Transit (DART) officer was also killed.

Chief David Brown issued a statement indicating that snipers reportedly shot at least 10 police officers from "elevated positions" during the protest, and that of those officers, three were deceased, three were in critical condition, and two were in surgery. It was later announced a fourth officer had died. Brown said that an intensive search for the suspects was underway, and asked the public to "keep us in your thoughts and prayers tonight." The officers were taken to Parkland Memorial Hospital and Baylor University Medical Center.

Demonstrators had said the protest had been peaceful throughout the day, with speakers talking to the crowd, people holding signs, and chanting for justice in regards to the deaths of Sterling, Castile, and other black people who have been killed by police. The Dallas Police Department had been tweeting updates and videos from the protest, and many Twitter users wrote that the officers at the event had been peaceful as well, taking photos and conversing with the protesters.