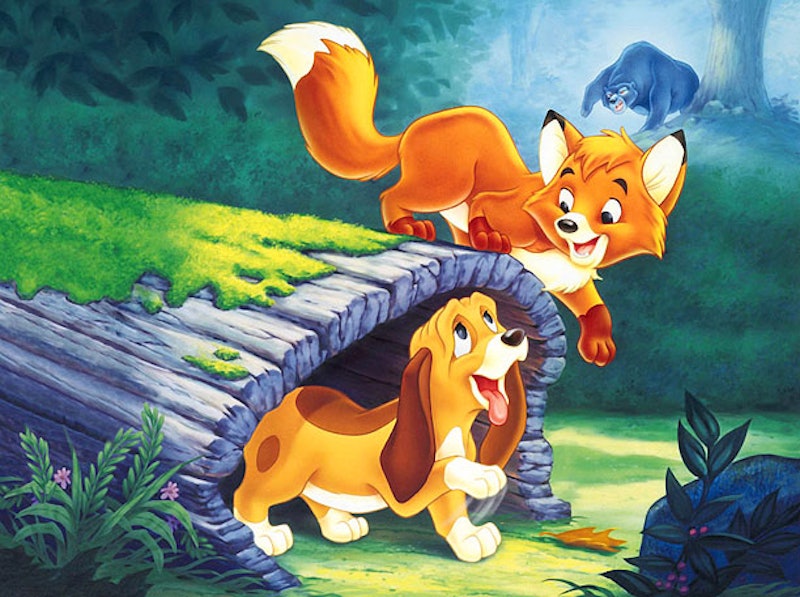 Being absolutely obsessed with Disney movies can't even begin to prepare one for watching The Fox and The Hound for the first time. I've seen pretty much every Disney movie, but for some reason the 1981 classic fell through the cracks of my childhood. In honor of The Fox and The Hound's 35th anniversary, I decided to watch it for the first time. When I told a co-worker my plan to head home after work and chow down on popcorn and wine while watching the film, she simply responded, "Oh boy, good luck." Wasn't this supposed to be a happy tale of two best friends? I decided I didn't want to know anything about it before I started, so please imagine me watching it for the first time with no knowledge of its plot. Spoiler alert: It did not go well.

I cried and cried and cried. The last time I sobbed that hard watching a film was Old Yeller. And in my estimation, if you didn't cry in Old Yeller, you have no soul. The Fox And The Hound was truly devastating. Is this really a movie for children? I would never let my kid watch something so horrifyingly depressing. I'm actually quite happy my mom didn't put me through this sob-fest earlier in life.

For those of you as clueless as I was, here's the gist: A fox and a hound become best buddies until the hound leaves for the winter and comes back a full blown hunting dog. Apparently fox and hounds cannot be pals.

Here are 16 things I noticed watching the Disney flick:

Remember the days when the credits used to role before the film? Yeah, there’s a reason they moved it to the end. It takes forever to get through.

3. They Don’t Even Give Tod’s Mom A Chance

Oh, were you expecting a happy film? Nope, Tod’s mom gets murdered before the film even begins.

In case you couldn't tell by his very distinct laugh, the man who voices Boomer (Paul Winchell) is also the voice of Tigger. Once you know it, you really just see Tigger.

Tod gets blamed for the entire fiasco of the spilt milk when it’s clearly the chicken’s fault. Why is no one yelling at the damn chicken?

7. Boomer Is Kind Of A Jerk

Imagine you’re the caterpillar sitting in your home and some woodpecker busts through the walls to eat you. He straight up wrecks Squeeks’ home. So rude.

Tod and Copper have the cutest bromance of all time.

9. “Why You Blasted Female”

Alright Disney, you're being a little sexist there with your comments about females. The old lady was smart enough to blow out Amos Slade’s radiator, so she’s pretty damn smart.

10. Copper Gave Up On Tod Way Too Fast

He was your best friend! It was not his fault Chief got hit by a train. This friendship went downhill so fast.

WHY IS THIS HAPPENING?! Don’t abandon your pet, lady!

12. When Did This Become A Love Story

Get out of here, Vixey. I want Tod and Copper to get back together, not abandon each other because Tod found a female.

Alright, relax Taylor Swift, you literally just met Tod five minutes ago. Why is this girl talking about babies already?

No child should ever see this movie.

15. Why Is The Old Lady Helping Amos Slade

Don’t bandage up his foot for him. He’s literally the worst neighbor of all time.

So, you have to prove your friendship by fighting a bear, almost dying, and then ultimately parting ways as acquaintances?

Bye childhood, hello adulthood. No thanks.