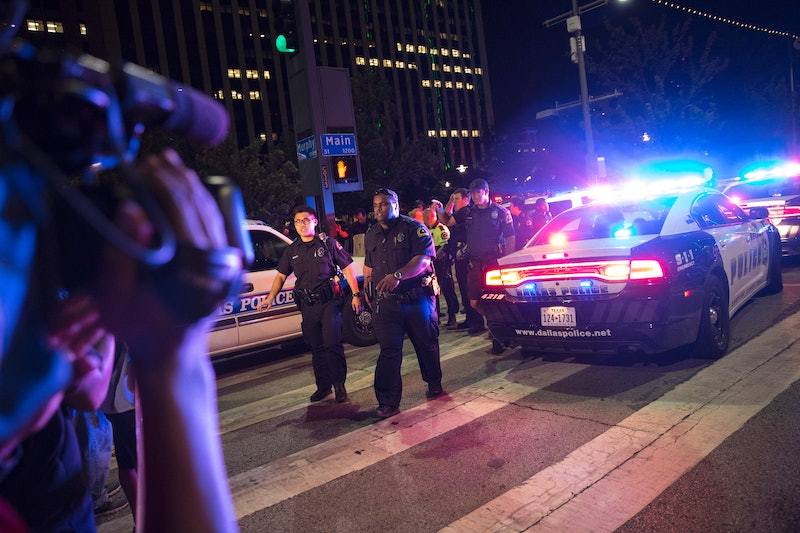 In what many will remember as the week America's racial divide split wide open, news of people shooting and killing police officers at a Black Lives Matter protest in Dallas shocked the nation. Members of the Black Lives Matter movement and police supporters alike are sharing "Pray For Dallas" memes and tributes to show support for the city under siege.

The protest, like many others around the country, was held in honor of the lives of Alton Sterling and Philando Castile, two black men shot and killed by police within less than 24 hours. But unlike other protests, things turned violent at the Dallas protest when two snipers opened fire on police, killing at least four officers and injuring six others.

While it is important to support the police during this additional tragic event (in a week already filled with tragedy), supporting the city of Dallas as a whole, which will undoubtedly be shocked and traumatized after these shootings, is equally important.

Below are some memes and tributes to share to show your support for Dallas police and Dallas residents:

While Dallas police and residents continue to live through an unthinkably difficult night, showing solidarity for them, their loved ones and their city is a simple way to remind them that they are not alone, and they have the love and support of their country behind them.

More like this
5 Ways To Stand In Solidarity With Women In America From The UK
By Sophie McEvoy
What Is Happening With Sheku Bayoh’s Case?
By Sophie McEvoy
The Most Powerful Photos From The Weekend’s Abortion Rights Protests
By Melanie Mignucci
For These Abortion Clinic Volunteers, Going TikTok Viral Is A Risk Worth Taking
By Audra Heinrichs
Get Even More From Bustle — Sign Up For The Newsletter