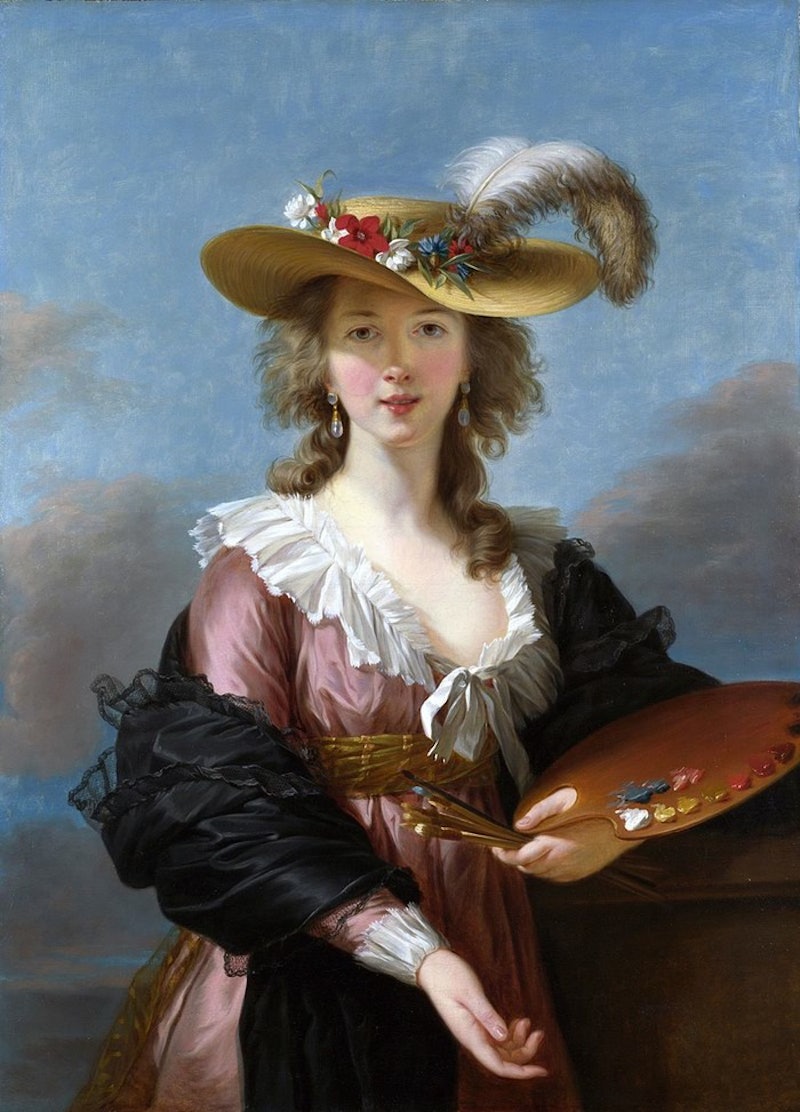 Even if art history's not your forte, you're likely to be able to name a few influential female visual artists. Georgia O'Keeffe? Yoko Ono? Frida Kahlo? The names are big; but dwelling in art history are numerous names that should be far bigger than they are. Women's role in the production of art and creative images has been beset (and is still beset) by sexism and gender politics for centuries, with patronage, attention, and historical status given to the biggest male names while the females are ... well, given less of a spotlight. That's not for lack of talent, though. There are multiple women who deserve to be household names when, outside of the art world, they get little more than a "who?"

Making things even more frustrating, many of the women on this list were notable at the time, even highly prominent; some were among the most famous of their era. But in the process of creating art history, they've been sidelined as creating "women's art" or as less talented or successful as their male counterparts. Success isn't everything for an artist, but when they're women in centuries where women were definitely not supposed to be making great art and earning a living for it, success counts for quite a lot. Even if you think that the work of Louise Vigée Le Brun is rococo sugar-sweetness, for instance, you can't deny her influence or her talent.

Here are five women to add to your lexicon from the annals of art history. They all changed the way we view art and female artists, both in their time and in ours.

This woman should be known far, far better than she is; for one thing, at the time of her painting career, she was famous. Gentileschi, born in 1593, was a follower of the Italian painter Caravaggio, and the Uffizi Gallery in Florence says she was "considered as one of the most accomplished and most famous women painters of the 17th century," while the Art Institute of Chicago goes further: she was "centuries ahead of her time ... one of the most famous and skilled painters of the Baroque era." Not woman painter; just painter, period. That's how good Gentileschi was.

She had the patronage of the Medici family, befriended Galileo, and painted for the Spanish king. Her most famous paintings, as with many of the other painters of the time, were on Biblical subjects, including a visceral Judith beheading Holofernes, which scholars have wondered about as a possible "revenge fantasy," considering that Gentileschi herself was raped by a family friend when she was 19 and then tortured during her court testimony against her rapist. Today, Gentileschi has a seat at Judy Chicago's famous "Dinner Party" art piece of famous female influences, and has a powerful but all-too-unknown reputation as one of the biggest talents of her century.

Edmonia Lewis, born in the early 1840s, was extraordinary for multiple reasons. She was the child of an African-American father and a part-Ojibwa (Chippewa) Native American mother, apparently rejected at birth and raised by her mother's relatives (her Native American name was Wildfire); while a student at Oberlin College, she survived a beating by a white mob after a false accusation of poisoning; and as a sculptor, she created some of the most daring neoclassical sculptures of the late 19th century, on themes from racial justice to women's history.

Lewis's reputation these days comes from the fact that she was both the first African-American and the first Native American woman to earn her living as a professional sculptor; but that alone isn't the extent of her achievements. She used her sculpture as activism; the Smithsonian records that it was her portraits of the abolitionist campaigners William Lloyd Garrison, Charles Sumner, Wendell Phillips, John Brown, and Colonel Robert Gould Shaw that kickstarted her career and allowed her to move to Italy. She was likely a lesbian, and the poisoning allegations that occurred at Oberlin may have been a seduction attempt of a female student gone awry; and when she returned to America in the 1870s it was as a conquering hero, with receptions across the country and her most famous work, Death of Cleopatra, exhibited for the 100-year anniversary of the Declaration Of Independence.

To understand the true importance of Herrad of Landsberg, you have to understand her context: a convent in 12th century France. Herrad was a nun and eventually abbess at Honenburg Abbey, one of the only ways in medieval European society in which a woman could receive an education and practice artistic pursuits without interruption (the polymath Hildegard von Bingen demonstrates this pretty clearly). Which is why Herrad was so groundbreaking: she wrote, edited and illustrated the first entirely female-written encyclopedia.

The Hortus Deliciarum, or Garden of Delights, took years to construct, and Herrad, as abbess, controlled contributions from numerous other nuns, but it's fairly clear that the primary guiding hand was her own. And what a thing it was: an avowed attempt to compile all the knowledge of the time, from science to religion, accompanied by a whopping 344 delicate illustrations. The extraordinary document was tragically destroyed in a fire at the Library of Strasbourg in 1870, but enough copies had been made of the illustrations and text to recognize that Herrad was an artist of considerable skill and talent.

Xue Susu's fame during her lifetime, in the Ming Dynasty in China, wasn't solely focused on her artistic achievements: she was one of the great courtesans of the time, before retiring to become a Buddhist in quiet seclusion. But Xue's artwork was distinctive; Cordes Hoffman has argued that her painting style, which was "consciously and inextricably linked with artists of preceding eras," was very different from the other female artists of the time, and was "a common move for scholar-gentry painters". In other words, she alone dared to paint as a member of the literary establishment.

Susu's reputation was both literary and artistic: she was a renowned poet and painter who "seduced late imperial minds," according to art historian Daria Berg. As a figure of power and lover of generals and poets, she also apparently saw herself as a "female knight-errant" and was exceptionally skilled at archery. Badass.

If you want a picture of a person who can survive regardless of the circumstances, Vigee Le Brun is your woman. An exceptional artist who began working (illegally) from a young age, she became Marie Antoinette's most favored portrait artist, producing dozens of pictures of the queen and her children and earning the rank of her official portrait artist. Her talent and ambition helped her when the French Revolution arrived, whereupon she fled to Russia, made friends with Catherine the Great, eventually returned to France with a pardon, and proceeded to paint most of the aristocratic figures of England, including Lord Byron, and the Prince of Wales.

She was at the time one of the only prominent female artists in Europe, and her ability to produce a career as a highly celebrated portraitist in the middle of incredible political upheaval showed her sheer gifts. The Metropolitan Museum in New York has put on a retrospective of her work in 2016, Woman Artist In Revolutionary France, with what the Guardian calls "gentle, often exquisite portraits" on show; the Met calls her "among the most important of all women artists." Le Brun's ability to make even the most irascible sitter look serenely beautiful was probably her most political talent.