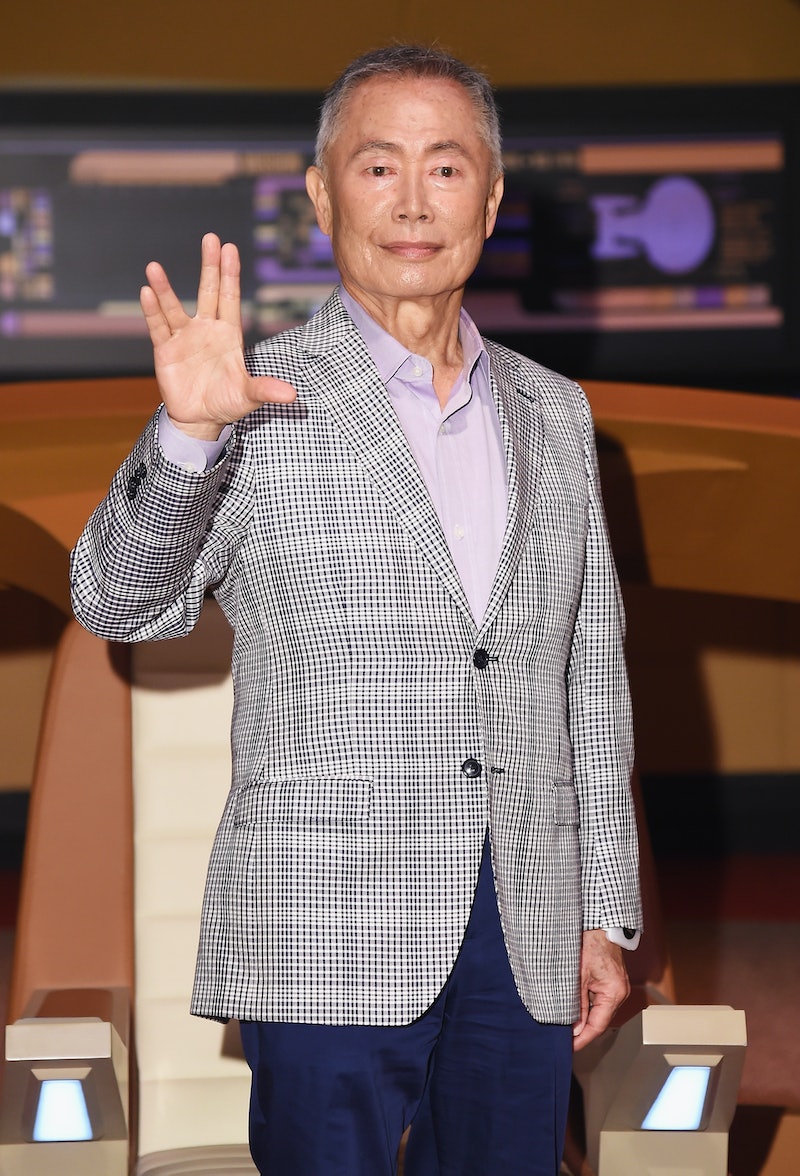 On Thursday, Star Trek fans were met with the progressive news that iconic character Hikaru Sulu will be revealed as openly gay in the latest movie instalment, Star Trek Beyond. Actor John Cho, who stars as Sulu in the rebooted film franchise, revealed the news while speaking with Australia's Herald Sun, where he also confirmed that the decision was a loving tribute to actor George Takei, who played the role in the original series. Takei, himself, is an influential and openly gay man and prominent LGBTQ activist, so the decision to reinvent the character of Sulu as an openly gay man initially seemed aptly thoughtful and respectful. Later on Thursday, however, Takei responded to Sulu being a gay character in Star Trek Beyond by telling The Hollywood Reporter that he thought the decision was " really unfortunate," stating: "I'm delighted that there’s a gay character ... unfortunately, it’s a twisting of Gene’s creation, to which he put in so much thought."

(Update: Star Trek franchise star Zachary Quinto, who portrays Spock, has now also spoken out in disagreement with Takei's statement, telling PEDESTRIAN.TV, "I find as a member of the LGBT community myself, I was disappointed by the fact that George was disappointed. I think any member of the LGBT community that takes issue with the normalized and positive portrayal of members of our community in Hollywood and in mainstream blockbuster cinema..." Quinto trailed off.

"I get it. He has had his own personal journey and has his own personal relationship with this character but, you know, as we established in the first Star Trek film in 2009, we've created an alternate universe," he continued, "and my hope is that eventually George can be strengthened by the enormously positive response from especially young people who are heartened by and inspired by this really tasteful and beautiful portrayal of something that I think is gaining acceptance and inclusion in our societies across the world, and should be.")

Takei also explained that he'd discovered Sulu's new sexual orientation through Cho in 2015 and was immediately opposed to the idea, explaining:

"I told [Cho], 'Be imaginative and create a character who has a history of being gay, rather than Sulu, who had been straight all this time, suddenly being revealed as being closeted.'"

Takei also mentioned how he "urged" director Justin Lin to "Honor [Roddenberry] and create a new character" because Star Trek Beyond is to be released during the 50th Anniversary of Star Trek. Though it's understandable that Star Trek Beyond screenwriter (and actor) Simon Pegg along with director, Lin would have reasonably assumed that their decision would have been a fitting tribute to the powerful legacy of Takei, it's also completely understandable to see where Takei is coming from with his reasoning.

Takei mentioned in the interview that Roddenberry was "a strong supporter of LGBT equality," but that, due to the pressures of the TV network and the politics of the time, wasn't able to tackle those issues within Star Trek. Regardless, according to Takei, Roddenberry had apparently always envisioned Sulu as being heterosexual. The decision, then, to make Sulu a gay man isn't just defying Roddenberry's original vision for the character, but it also defies the Star Trek universe's canon, creating a conflicting timeline which now makes no sense.

The events of the rebooted Star Trek movie franchise, it should be noted, take place before the action of the iconic '60s sci-fi TV show. As such, it could be suggested that Star Trek Beyond is now basically inferring that Sulu was gay before hurtling into the closet years later to become the heterosexual character that he is during the events of the original series of Star Trek (which is a painfully regressive character arc to imagine).

However, Star Trek Beyond screenwriter Pegg (who also plays Scotty in the franchise) has further denied that any of this is the case. Speaking with The Guardian on Friday, Pegg responded that he "respectfully disagrees" with Takei's assertion, including his opinion that the decision creates a problematic timeline: "Our Trek is an alternate timeline with alternate details." Defending their choice, he goes on to discuss the importance of how Sulu's sexual orientation is being dealt with as well as the fact that not only was the character never closeted but that there was never actually a storyline in the original series which ever explained the character's orientation:

"Justin Lin, Doug Jung and I loved the idea of it being someone we already knew because the audience have a pre-existing opinion of that character as a human being, unaffected by any prejudice. Their sexual orientation is just one of many personal aspects, not the defining characteristic. Also, the audience would infer that there has been an LGBT presence in the Trek Universe from the beginning (at least in the Kelvin timeline), that a gay hero isn’t something new or strange. It’s also important to note that at no point do we suggest that our Sulu was ever closeted, why would he need to be? It’s just hasn’t come up before."

A concerning aspect of Takei's disappointment with the decision and the revelation that he knew about it and opposed it, is the fact that it sounds as though his concerns simply weren't taken seriously. And if that was the case, then it not only feels hugely disrespectful to discount the strong opinions of one of the original cast members of Star Trek, but it's also tenuously condescending to disregard Takei's opposition to the decision as a gay man.

Considering that the scene in question which reveals that Sulu is gay is so short and simple (a subtle scene in which the character is simply shown with his same-sex partner and their daughter), would a quick rewrite have really been difficult? There were also surely multiple viable options for introducing and exploring LGBTQ characters in a way which would have remained faithful to Roddenberry's original vision, as suggested by Takei.

However, this is also something that Pegg sounds eager to deny in the interview with him suggesting that Roddenberry's pioneering portrayals of diversity seem to imply that the Star Trek creator would have likely approved of Sulu's sexual orientation, and that his original artistic vision may have been different had the show have been made today, he said:

"I don’t believe Gene Roddenberry’s decision to make the prime timeline’s Enterprise crew straight was an artistic one, more a necessity of the time. Trek rightly gets a lot of love for featuring the first interracial kiss on US television, but Plato’s Stepchildren was the lowest rated episode ever."

Takei is understandably feeling disappointed in the fact that his viewpoints and opinions on the matter were not heeded when Pegg and Lin made this decision. But having said that, Pegg's response concerning the issue and the importance of pushing this particular boundary feels just as pertinent and crucial a point as giving LGBTQ people their own agency in approving of narratives concerning them. Pegg's opinions on Star Trek's failure to so far include LGBTQ characters within its universe, for example, are absolutely spot on (and even a little magical):

"[Takei]’s right, it is unfortunate, it’s unfortunate that the screen version of the most inclusive, tolerant universe in science fiction hasn’t featured an LGBT character until now. We could have introduced a new gay character, but he or she would have been primarily defined by their sexuality, seen as the ‘gay character’, rather than simply for who they are, and isn’t that tokenism? ... Whatever magic ingredient determines our sexuality was different for Sulu in our timeline. I like this idea because it suggests that in a hypothetical multiverse, across an infinite matrix of alternate realities, we are all LGBT somewhere."

This is a beautifully put argument for Pegg to make and it's also absolutely right. This sort of progressive inclusion of LGBTQ characters is something which deserves positive prominence within mainstream movies, and which should be portrayed in the same manner as heterosexual characters have always had their sexuality represented on screen. So, though I can empathise with the fact that Takei likely feels hurt that his viewpoints, experience and opinion on the decision wasn't taken into account when revealing Sulu as a gay character, I can also understand Pegg's insistence that it was a decision which felt natural and timely for the Star Trek universe. We desperately need more positive LGBTQ visibility within all genres of film, and Star Trek Beyond is still breaking some much needed ground by bringing that representation to its story.