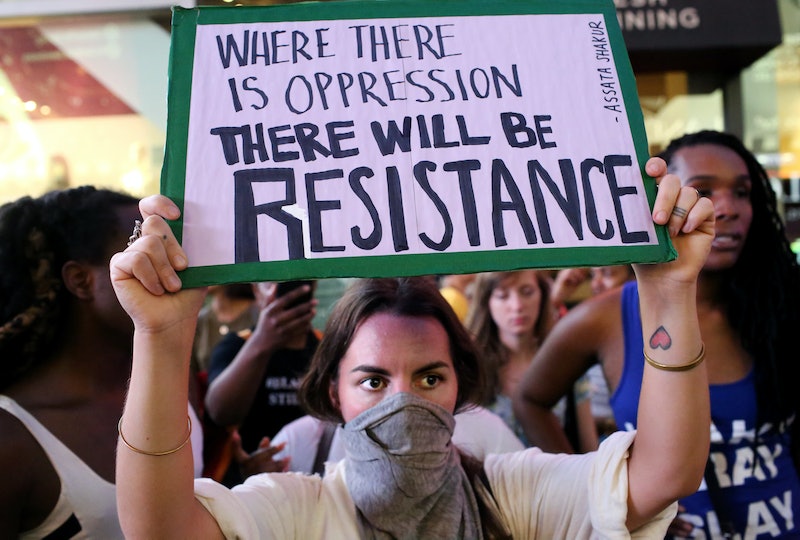 In the last few days, I’ve seen several Facebook status updates from friends proclaiming proudly that they “don’t care who they offend” with their views. Dear white allies: If you’re not a person of color, posting a Facebook status to show solidarity is helpful, but there’s no need to act as if you’re being brave for simply feeling the way you feel. You won’t win an award for being on the right side of history.

Social media can be, should be, and is a battleground for social change. I’ve seen people unpacking their feelings on systemic police violence, and a few weeks ago, I saw people talking about the Orlando Pulse nightclub shooting with family members in comment threads on Facebook. I’ve seen people acting as agents of change through tweets. I’ve seen people engaging with each other in a way that would have seemed, and was, unprecedented decades ago.

I’ve already seen people type Alton Sterling’s name in one status, and then five minutes later post a Game of Thrones quiz about which character they are.

On Twitter, writer and producer Issa Rae set up a college scholarship for Sterling's children — and I can't think of a better place to start. As of the last time I checked, the campaign for a Alton Sterling family scholarship had raised over $600,000, more than double the amount of its intended goal. And how do you think that happened? Social media — hashtagging, tweeting, posting on Facebook, sharing; people coming together from all corners through their computers to create change. But that doesn't mean that's enough. The fight must not take place solely behind computers screens — but also in the streets, as it did during the Civil Rights Movement.

What I'm worried about is that many allies seem to think that posting to social media is enough. People need to stop simply tweeting about the social injustices that happen to black people in this country — and take action. They need to show up. The fight for social justice doesn't end a few days from now, when we resume posting those 15-second recipe videos and pictures of puppies. I’ve already seen people type Alton Sterling’s name in one status, and then five minutes later post a Game of Thrones quiz about which character they are.

We need to fight for equality every single day. We need to flood the phone lines of our Congress members and call out for action. We need to convene together in public spaces and mourn, raise our voices so that their names are never forgotten. We need to film the police when something doesn’t feel right to make sure they are held accountable. We need to call out for legislation that restricts the use of deadly force when it isn’t necessary. We need to elect representation in our communities that will speak for us, that will protect us — all of us. We need to call for police training that doesn’t systematically teach police officers to view people of color — young and old, regardless of gender or sexual orientation — as thugs, criminals, villains, miscreants, obstacles, shooting targets. We must type until our fingers bleed, until our voices are hoarse, until we can't hold our hands up and scream "don't shoot" anymore when we protest in the streets.

As Teen Vogue's social media director Terron Moore said in his piece, "What It Feels Like to Be a Black Man in America Right Now," "We don't chant #BlackLivesMatter because we think they matter any more than yours does. We need to scream 'BLACK LIVES MATTER' until our throats bleed because we are consistently reminded again and again and again that they do not."

More like this
Why You're Seeing Green Bandanas At Abortion Rights Protests
By Lexi Inks
Aesop's Queer Library Is Open
By Tomi Otekunrin
Jujubee’s Humble Reminder
By Sam Ramsden
For These Abortion Clinic Volunteers, Going TikTok Viral Is A Risk Worth Taking
By Audra Heinrichs
Get Even More From Bustle — Sign Up For The Newsletter