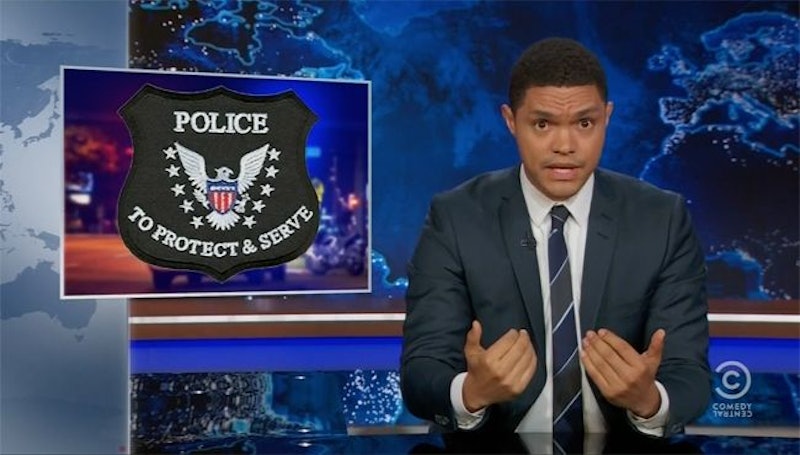 The Daily Show host Trevor Noah spoke about police violence and systemic racism Thursday in a somber and thought-provoking episode of the satirical news show that touched on the officer-involved shooting deaths of two African American men earlier in the week. In the segment, which was taped before a gunmen attacked and killed five police officers in Dallas late Thursday, Noah refutes the widespread misconception that supporters of the Black Lives Matter movement are, as a whole, anti-police. It was a message that proved particularly timely as events unfolded in Texas.

"Did you guys see that shooting that happened two days ago?" Noah asks, referring to Baton Rouge police shooting and killing 37-year-old Alton Sterling outside of a convenience store on Tuesday. "Because don't worry if you missed it. There was another one yesterday," the Comedy Central host continued in reference to police fatally shooting Philando Castile during a traffic stop in Minnesota on Wednesday. "Two videos in two days of police fatally shooting two black men who, when you watch the video, did nothing to warrant them losing their lives."

Wading in on an issue that has become a highly controversial, and at times, highly polarizing debate, Noah sought to dismantle the misconception protesters outraged over police brutality and officer-involved shootings are against the police entirely. "It always feels like in America if you take a stand for something, you automatically are against something else," Noah said. "But with police shootings, it shouldn't have to work that way. For instance, if you're pro-Black Lives Matter you're assumed to be anti-police. And, if you're pro-police then you surely hate black people ... when in reality you can be pro-cop and pro-black, which is what we should all be. You shouldn't have to choose between the police and the citizens that they are sworn to protect."

Noah goes on to question why so many people still deny that blacks are disproportionately targeted and affected by police brutality despite numerous incidents caught on video, including the deaths of Sterling and Castile. Such continued skepticism points to a prevalence of systemic racism, according to Noah. "You know what makes these incidents even more painful is the fact that there are some people who don't even think that this police problem exists," he said. "For some strange reason, when it comes to videos of police shootings, seeing isn't believing... Why is the video never enough?"

The Daily Show host also criticized how Americans respond to police killing black Americans with a disproportionate amount of outraged when compared to the death of Harambe the Gorilla and urged people to acknowledge the racial bias present.

"America has a problem within its police force, and although this is a problem that disproportionately affects black people, it's not just a black problem," Noah said. "This is an American problem."