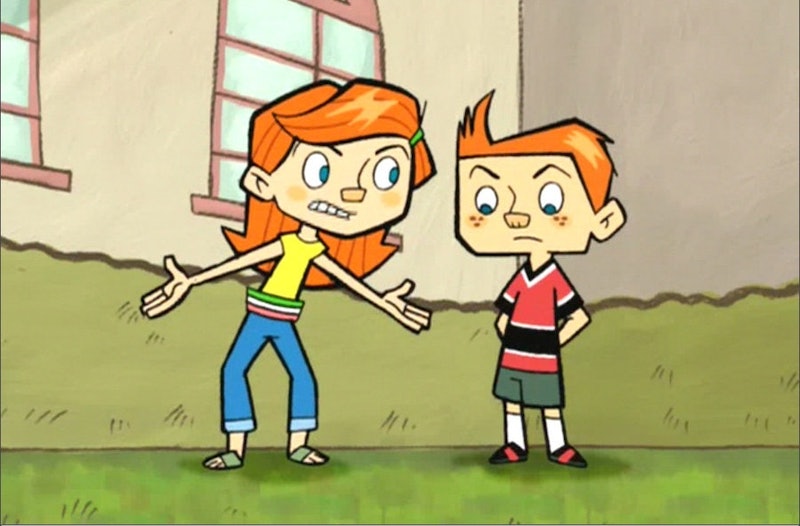 If there was one channel that was almost always on in my house as a kid, it was Disney Channel. However, when looking back at many of the shows on Disney Channel, I realize that many of these classic Disney Channel shows are dark. Like, super dark. I really don't know how I didn't notice it sooner. When looking back at the overall synopses of some of these shows, I seriously can't believe what I'm reading, because, oftentimes, comedy comes from a place of tragedy and even the most cheerful of characters on the screen may have had pasts that didn't strike me as being as awful as I realize they are now.

This show might be the most obvious of the dark Disney Channel shows. The plot revolved around a girl who is obsessed with the supernatural, and it soon becomes clear that this isn't your average teenager. But it's Fiona's personal struggles that make this show dark. Not only does she face paranormal activity on a daily basis, but she also has to deal with the fact no one really believes her and everyone judges her outside of her website. That is not an easy life for a pre-teen.

The Jersey was about an athlete who puts on a sports jersey and ends up being able to enter into the lives of his favorite sports heroes. Even if you're not familiar with this show, you may already have an idea of where I'm going with this. Imagine getting a taste of the glamorous life of a pro athlete whenever you want? It sounds like a dream. But imagine the kind of resentment and dissatisfaction that would build up within you about having to live your own life without the glamour and the glitz?

Phil's trip back in time may have started out as a vacation, but, when his family ended up getting stuck in a strange past, that must have been terrifying. Yes, they learn how to adjust quite well, but imagine his parent's concern when they first realized they can't go back home? That they could possibly never see their friends and family again? Yeah.

On the surface, the show that gave Selena Gomez her start is just a regular show about teenagers learning to use magic. But, ultimately, Wizards of Waverly Place is about siblings who must go up against each other to see who's the most worthy of keeping their powers. If this show wasn't on Disney Channel, some Game Of Thrones-level fighting could unfold over that.

Can we just talk about Zack and Cody's situation for a second? They live in a hotel thanks to their mother's job, but, otherwise, their dad is out of the picture and they're living in what must be a cramped, low-privacy, paycheck-to-paycheck situation. No wonder why Mr. Mosby never got so mad that he actually kicked them out. He was doing a favor for them in the first place.

Living in the spotlight means losing a number of different things, including your privacy, your time for family and friends, and your freedom make choices for yourself. Miley must hide her identity from the public to try and get a shot at a normal childhood. Basically, this show touches on the struggles of fame, guarding your privacy, and finding yourself, and that would certainly not be a fun way to live in real life.

Jessie follows the story of a girl who moved to the big city to follow her dreams. Inspiring, right? However, when you take into consideration the fact that a teenager moved away from her family and friends to take a full-time babysitting job and support herself in the big city, the story takes on a whole different light. While the kids might find their crazy antics fun and hilarious, Jessie is really there for a paycheck that she needs to survive on her own.

The weight of the world is literally on this teenager's shoulders. Sure, she's proven time and time again that she can handle it, but juggling school, friends, cheerleading, and super-villains behind your parents' back is never easy. Plus, those villain were actually trying to kill her.

Growing up, I always though that Raven's ability to see the future was awesome. She could get the inside scoop on her crush, stop her friends from getting in trouble, and help out her family. But her visions usually end in more disaster than if she'd never had them in the first place, and she can't even turn off her super-human ability even if she wanted to.

To be completely honest, I'm surprised that this concept didn't last more than one season. The teen medical drama revolved around a group of students who worked as EMS assistants. But perhaps it's that idea that made the show too dark to continue. Working as an EMT means dealing with life and death situations on a daily basis — and there's not much Disney could do with that idea without having the show become too bloody and uncomfortable.

Being that this story is being told from the perspective of a literate dog, the concept is already an odd one. But, when you really think about it, the show is essentially about a super smart pet who has to live through the internet in order to get the freedom he needs. Yikes. At least his owners treat him right.

Two orphan twins who were separated at birth is what this show is about. And, while they did reunite and form their own kind of family, the burden that comes with not knowing your parents was certainly looming over Tia and Tamara as they were trying to find themselves and go through their own everyday teenager struggles. Not to mention they lived their entire lives to that point separated,never knowing they had biological family out there in the form of each other.

If I had to pick a winner for the most messed up Disney Channel show, this one definitely takes the cake. The cartoon followed two orphans who had a magical device to replace anyone they didn't like. Not only did they pick out their parents, but they learned that, if they don't like something about someone, they could just switch them out for someone else. Too tall? Switch. Too fat? Switch. Too annoying? Switch. You see the darkness here, right?

Seeing the dark side of these shows doesn't mean that your childhood has to be ruined. If anything, I have a deeper respect for the content that's being created for a young audience, who will understand even more of the world as they get older. Disney Channel, you just keep doing you.