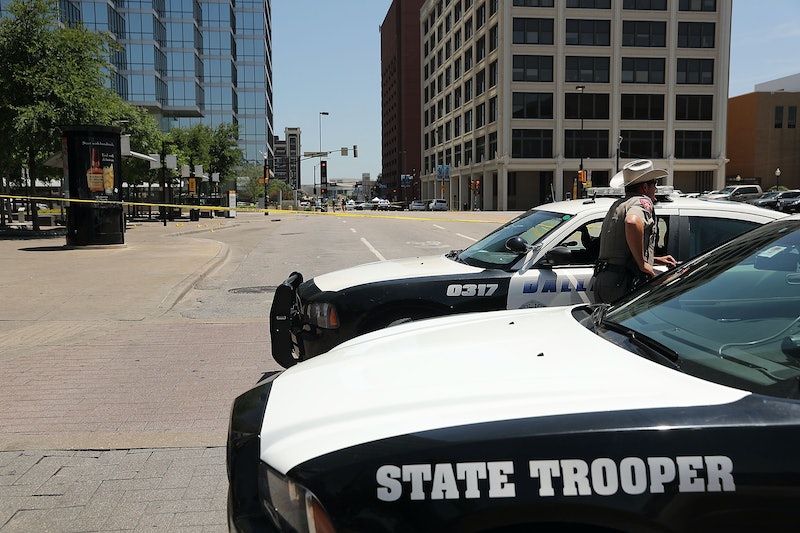 Shortly after the horrific shooting in Dallas on Thursday, which left five police officers dead and several more injured, the city’s police department released an image of a man whom they identified as a suspect in the assault. It turned out to be a case of mistaken identity: The man in question, Mark Hughes, immediately turned himself in and was released by police after 30 minutes of questioning. Yet the Dallas Police Department didn’t remove a tweet identifying Hughes as a suspect until over 14 hours after Hughes’ name had been cleared.

When Bustle reached out to the DPD why it hadn’t taken the tweet down, a spokesperson for the department said to Bustle that she had “no information regarding that.” The tweet was deleted several minutes later.

Nevertheless, the damage has been done. According to his attorney, Hughes has received “thousands” of death threats since his image was released. Hughes’ told local news that the Dallas police didn’t apologize to him for circulating his image.

Hughes had attended the original protest with a rifle around his shoulder — Texas is an open-carry state, and according to Hughes’ brother, the rifle wasn’t loaded. Video taken by a Dallas Morning News reporter showed Hughes’ standing with protesters moments after shots were fired.

Since Hughes’ name was cleared, a 25-year-old Army veteran has been identified as the shooter. This man was killed by Dallas police via an unmanned bomb robot after an hours-long standoff in a nearby parking garage, according to the Los Angeles Times. The DPD says that Investigators later discovered bomb-making materials in his home, along with more weapons and ammunition. He had no criminal record.

The Department of Homeland Security believes that the deceased suspect acted alone in carrying out the attack. Three other people were also taken into custody by Dallas police in connection with the assault, but no further information has been released about them.