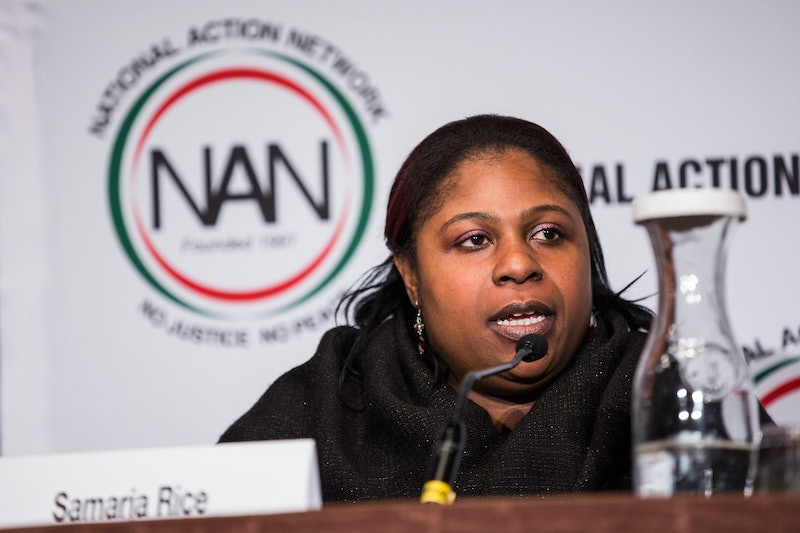 In response to the deaths of Alton Sterling and Philando Castile at the hands of police officers, the mothers of Tamir Rice and Michael Brown, both of whom were also killed by police officers, have spoken out about police brutality. Earlier this week, Samaria Rice and Lezley McSpadden each commented on the racist nature of police violence, and asked people to think more critically about what justice means.

In an op-ed for The New York Times, McSpadden expressed grief and anger in response to the news that more black men had been killed by police, writing:

Alton Sterling is dead. Philando Castile is dead. My son, Michael Brown, has been dead for almost two years now.

Death isn’t pretty for anyone, but what these families now face is the horror of seeing their loved one die over and over, in public, in such a violent way. They face the helplessness of having strangers judge their loved one not on who he was or what he meant to his family but on a few seconds of video. ...

Sometimes it seems like the only thing we can do in response to the police brutality that my son and so many other black boys and men have suffered is to pray for black lives. Yes, they matter, but is that changing anything? What is going to be different this time?

In a phone interview with Cleveland.com, Rice conveyed a similar sense of frustration and despair. "What will it take for this police terrorism to stop?" she asked. "I'm overwhelmed and I'm fed up with waking up to see another person murdered, another black man murdered. That is a scar that I will have for the rest of my life."

McSpadden and Rice both went on to describe the systemic nature of this injustice. In her interview with Cleveland.com, Rice addressed the discrepancies in how white police officers approach predominantly black neighborhoods.

There is again an uproar, and people are going to once again do a lot of talking about black-on-black crime versus white-on-black crime. Truth is, black on black crime is perpetuated by systemic injustice and social ills. But, real talk, this debate is meaningless so long as we still live in a world where a black man can get killed for selling cigarettes on the street, where a black boy can get killed for waving a toy gun.

She concluded her op-ed with some powerful words about what she would say to Sterling's and Castile's families, and she pushed people to reevaluate their definitions of justice:

People will try to twist the words of Mr. Sterling and Mr. Castile’s families and turn them into something ugly. These men will be called “thugs” and much, much worse. It’s already happening. Click on the comments section of any article you read about their deaths, and you will be shocked by the racist comments of people who insist — insist — that they obviously deserved to die.

So what would I say to their families? When you’re ready, and if you need me, I’ll be there for you. But the people I would really like to say something to are the ones who claim that justice will prevail. Whose justice? When justice comes to the one who didn’t pull the trigger, that’s when I’ll believe you.

These are the voices we need to be amplifying right now, not the voices of people who attempt to derail #BlackLivesMatter protesters or protests. We must move in solidarity with Rice, McSpadden, and other black folks — none of whom should have to educate us or transform racist institutions on their own — and actively do the work of challenging police violence and anti-black racism in our communities.