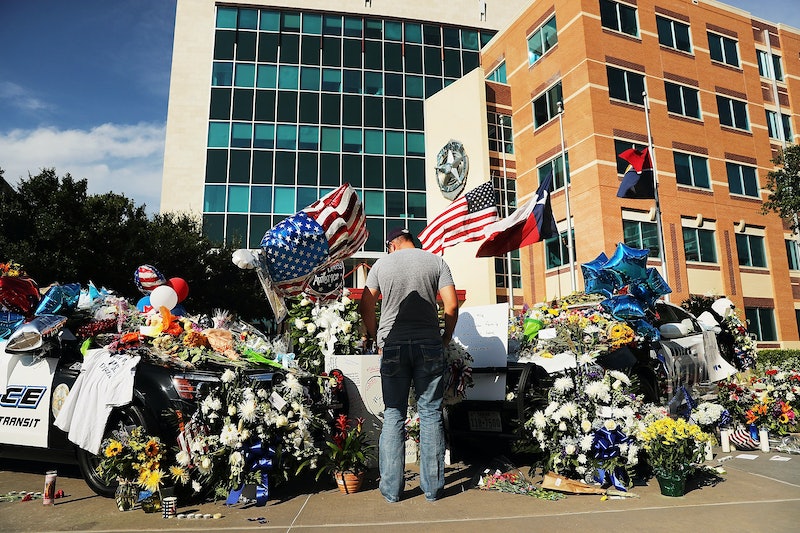 All five of those killed Thursday in Dallas when a gunman opened fire on law enforcement officers during a peaceful protest over police-involved shootings were identified by city officials over the weekend. Among them was Sgt. Michael J. Smith, a member of the Dallas Police Department for over 25 years.

Smith, 55, leaves behind a wife and two daughters. He reportedly served seven years as an Army Ranger before he joined the Dallas Police Department in 1989, according to an interview Texas television station KFDM conducted with his sister.

As an officer, Smith was repeatedly honored with performance excellence awards by the Dallas Police Association, according to a report from the Dallas Morning News. In February 2009, Smith was honored with the "Cops' Cop" award. "It is noted that he comes to work with a positive attitude and strives for excellence," a police newsletter detailing the honor said of Smith. "He has attended advanced level training at his own expense and approaches his duty with a 'can do' attitude."

Described by neighbors as "a very sweet family man," Smith was also reportedly a well-known member of Watermark Community Church in Dallas. "Mike Smith, a Watermark member and someone you may have seen protecting our campus, our body, your children was one of the officers killed on Thursday night," the church said in a statement sent to members of the congregation Friday via social media. "Please pray for his wife and two daughters and for all of the family members and friends of those who lost loved ones in Thursday's tragedy." When not on duty, Smith reportedly worked as a uniformed security officer for the church, the Washington Post reported. Fellow churchgoers celebrated Smith's life and shared memories of him on the church's Facebook page and on Twitter.

Smith was recognized as a graduate of Lamar University in a memorial post on his alma mater's official Twitter account. "The Lamar University community is deeply saddened by the tragic news that alumnus Michael Smith was one of the police officers killed in the Dallas shooting last night," the school said in a statement.

Four members of the Dallas Police Department were killed in Thursday's deadly attack along with one Dallas Area Rapid Transit (DART) officer. Seven other officers have been reported wounded along with two civilians in what has been called the deadliest attack on U.S. law enforcement since the Sept. 11 attacks.